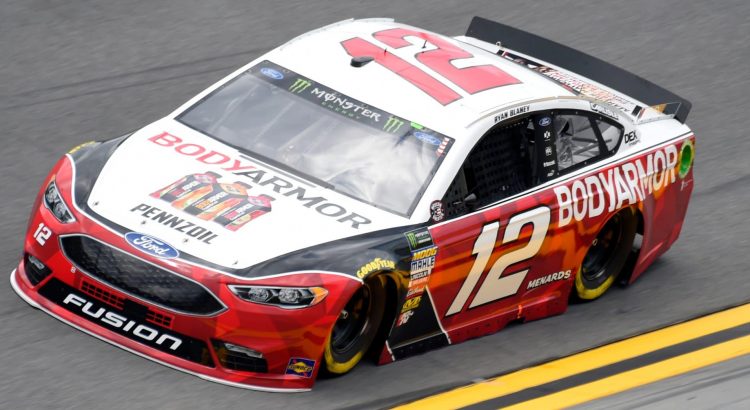 2019 RECAP: 2019 was the fourth full season for Ryan Blaney in the Cup Series. He has improved each season and that should continue in 2020. Blaney won a race for the third consecutive year. Last year he found Victory Lane at Talladega. He also improved from eight top-five finishes to 11 in 2019. His top-10 finishes improved from 16 to 18. His 13.7 average finishing position was also a career best. When you look even deeper into the numbers, you can see why Blaney is ranked eighth in my Driver Rankings this year. He scored the second-most quality passes (2,295) and ran the third-most laps in the top 15 (7,867). As long as a driver is running up front and passing cars, he will have a good chance to score a lot of fantasy points.

Inconsistency was the problem for Blaney last year, just like his teammate Brad Keselowski. Blaney opened the season with three straight finishes outside the top 20. He then went on a tear with three straight top-five finishes. The roller coaster ride continued throughout the season but a hot streak to start the playoffs allowed him to finish seventh in the NASCAR Point Standings. His strong run in the playoffs is the reason why he is ranked so high. Blaney had an eighth-place average finishing position in the playoffs when you take out his suspension problems he had at Dover (He was running in the top 10 when his car broke down). Blaney will carry a lot of momentum into the 2020 season.

2020 Preview: Could this be a breakout season for Ryan Blaney? I think so. I had him solidly ranked in the top 10 before Team Penske announced the crew chief changes. Blaney moved up a few spots and ahead of Brad Keselowski in my rankings now that we know Blaney will have Todd Gordon setting up his car in 2020. While Paul Wolfe is the best crew chief at Team Penske for using strategy to win a race, Gordon is the best at setting the car up to run well during the race. Blaney has all of the talent to run well. He just needs a little help dialing in his cars so he can gain more speed and Gordon should be just what he needs to take the next step forward in the Cup Series.

The Intermediate tracks were what kept Ryan Blaney from being a top-five fantasy driver last year. He only led 51 laps at the 1.5-mile tracks and 45 of them where at Texas. Blaney finished five of the 10 races on 1.5-mile tracks outside the top 20. That is not going to cut it in the Cup Series. The main reason for the drop off in performance from previous season is because of his inability to qualify up front like he had in the past. Team Penske often set their cars up for drivability in the race and not pure speed to win the pole. It will be interesting to see if the team uses the same strategy in 2020 or will they dial in more speed so their cars can start closer to the front. Las Vegas and Auto Club Speedway are the two best Intermediate tracks for Blaney. Make sure he is in your season long lineups (Fantasy Live and the Driver Group Game) at these tracks and he will have value in DFS (Daily Fantasy Sports) as well. (Ryan Blaney ranked 16th in fantasy points scored on the Intermediate Tracks in 2019)

Ryan Blaney is a boom or bust driver at the Superspeedways. He won the race at Talladega last year but that had a lot to do with the rest of the field crashing out of the race. Blaney has one win and a 24.2 average finishing position in his last seven Superspeedway races. He is very good at getting to the front and leading laps but he is not good at bringing his car home without any damage. He has crashed out of half of his races on the Superspeedways over the last three seasons. It will be tempting to use Blaney because of the speed he will show in practice but just play it safe and use his teammate, Joey Logano instead. (Ryan Blaney ranked 14th in fantasy points scored on the Superspeedways in 2019)

One of the biggest surprises last year was how well Ryan Blaney ran at ISM Raceway (Phoenix). He won the pole, led 94 laps and finished third in the spring race. Blaney returned to the track in November and he qualified 10th and finished third again. His average finishing position at the track prior to last year was 18th so his pair of third-place finishes shows that the reconfiguration of the track has helped Blaney more than any driver in the garage. Blaney also ran well at Martinsville and Loudon. He finished both races at Martinsville in the top five and he also finished fourth at Loudon. Blaney is a good fantasy pick at all Flat tracks in 2020. (Ryan Blaney ranked 6th in fantasy points scored on the Flat Tracks in 2019)

Ryan Blaney had one of the cars to beat in the spring race at Bristol. He qualified third, led 158 laps, scored 11 Stage points and finished fourth. Blaney has led at least 100 laps in three of the last four races in Thunder Valley. Make sure he is on your fantasy team at Bristol. Dover is a similar track to Bristol but Blaney did not have similar success at the Monster Mile. He finished 15th in the spring and 35th in the fall. His average finishing position at Dover is 19.2 so there are better choices for your fantasy team at the Monster Mile. Darlington is an old-school track and Blaney is an old-school driver. It is surprising that he has not had any success at the Lady in Black. His average starting position at the Track Too Tough to Tame is 14.4 and his average finishing position is 20.4. Find another driver for the Southern 500. (Ryan Blaney ranked 14th in fantasy points scored on the Steep Tracks in 2019)

Ryan Blaney only has four years experience in the Cup Series on the Road Courses but he has already proven to be one of the best drivers in the sport on these tracks. His average finishing position in his last four Road Course races is 4.2. That includes three finishes in the top five and a win at the Charlotte Roval. Blaney is a good fantasy pick at Watkins Glen and the Charlotte Roval. His allocations in the Driver Group Game may be more valuable on the over tracks since it is hard to find value in Group B. He will be worth a spot in Fantasy Live and DFS lineups at these tracks in 2020. (Ryan Blaney ranked 3rd in fantasy points scored on the Road Courses in 2019)