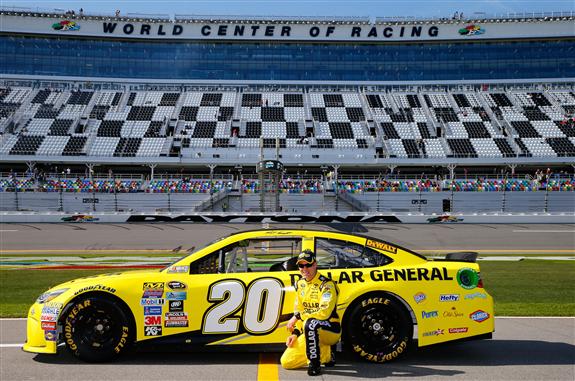 The 2017 NASCAR season is right around the corner. In order to get fantasy teams ready for the new season I decided to recap the 2016 season for my top 30 drivers and preview how I think they will perform this year. Each day I will post two driver previews until my No. 1 fantasy driver is revealed. I will continue my rankings with Matt Kenseth.

2016 RECAP: Matt Kenseth finished in the top five of the Point Standings for the seventh time in his career. The only thing his 2016 season was missing was a trip to the final four at Homestead. Kenseth had the winning car in the Daytona 500, but he was bumped out of the way by his teammate, Denny Hamlin. Kenseth bounced back to win two races (Dover and New Hampshire), finished eight races in the top five and 19 races in the top 10. Kenseth was even able to win the pole at Kansas, which not a strength of the No. 20 team.

Kenseth was a better option last year in Fantasy Live than he was in Yahoo Fantasy. Kenseth had a habit of qualifying outside the top 10 and finishing in the top five. He score many points for position differential and was able to lead 948 laps throughout the season. His value in Yahoo Fantasy was hurt by the quality of drivers who were also in Group A.

2017 PREVIEW: I may be too conservative by placing Kenseth 10th in my preseason driver rankings. The drivers who are in front of him are also very good, so the difference between drivers listed between 5 and10 is slim.

Everything will be the same with the No. 20 Joe Gibbs Racing team in 2017. Jason Ratcliff will once again serve as the crew chief and DeWalt will serve as the primary sponsor. The No. 20 team has one of the best pit crews in NASCAR, so Kenseth should have an advantage over the field again in 2017.

Kenseth turns 45 this season and shows no signs of slowing down. He is signed with Joe Gibbs Racing for one more year, so there could be some pressure on him to keep running up front, unless he plans to retire sometime soon.

Kenseth runs well at all of the tracks (except the road courses). Kenseth was placed into Group A of Yahoo Fantasy. He will be a good option for fantasy teams who want to go against what the popular picks are every week. Mast fantasy teams use Kevin Harvick, Kyle Busch, Jimmie Johnson, Joey Logano and Brad Keselowski the most throughout the season. Kenseth often scores as well as these drivers or better. Kenseth will be a good option the Superspeedways and most of the intermediate tracks. His inability to qualify upfront hurts his value in Yahoo Fantasy. Be sure to check out my Facebook Page to see what tracks I recommend using Kenseth at in 2017.