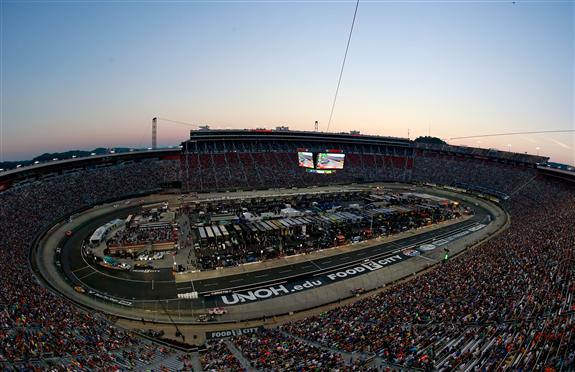 The Monster Energy NASCAR Cup Series returns to Bristol Motor Speedway for the Bass Pro Shop NRA Night Race. If you like bumping and banging, sparks flying, tempers flaring, high impact racing… this is the race for you. It is the first race I ever attended and it should be on each race fan’s bucket list. The race can be seen Saturday night at 7:30 p.m. ET on NBC Sports Network.

Since this is a Saturday night race, NASCAR will have a unique schedule this week. There will be two practices Fridays (10:30 AM ET and 12:30 PM ET, both on NBCSN). Qualifying will take place Friday evening at 5:30 PM ET NBCSN, followed by the Xfinity Series Race. I will have my DraftKings Xfinity Series picks posted after qualifying Friday (5:30 PM ET).

Three drivers dominated the race at Bristol in April. Kyle Busch won the pole, led 117 laps, had a 4.16 average running position and won the race. Kyle Larson qualified 6th, led a race-high 200 laps, had a 3.05 average running position and finished 2nd. He had a great chance to win until he was moved out of the way with 6 laps to go by Kyle Busch. Ryan Blaney had the most dominant car early in the race. He took the lead from Kyle Busch and was on his way to winning Stage 1 when he was caught up in a lapped traffic wreck. The race took two days to complete (because of rain) but as usual, it ended up being a good race to watch.

NASCAR used the traction compound at the bottom of the track to create more competitive racing. It was the second year they decided to do so at Bristol. I expect the “grip strip” will be applied this weekend and it will allow racing at the bottom and top of the track (once Kyle Larson and Ricky Stenhouse Jr. work in the top groove). This should make passing easier and allow some drivers who start outside the top 10 to have a chance to get to the front.

We must have at least 2 dominators in our lineup this week. The best way to find the dominators is to look at where the drivers qualify and what their 10-lap and 20-lap speeds were in practice. I will try to post the 20-lap speeds this week in my Garage Talk Notes.

The drivers I expect to be the top dominators this week include: Kyle Busch, Kyle Larson, Brad Keselowski, Ryan Blaney and Kevin Harvick.

The drivers who could be the top value picks (between $9k – $7K) for the race Sunday include: Joey Logano, Clint Bowyer, Jimmie Johnson, Erik Jones, Ricky Stenhouse Jr. and Alex Bowman

The drivers I expect to be the best cheap drivers (below $7K) for the race Sunday include: Paul Menard, Ryan Newman, Trevor Bayne and Matt Dibendetto

It is just another Fantasy NASCAR season and another year of dominance for my Fantasy Live picks. NASCAR.com changed the rules but that did not slow me down. My picks have finished in the top 50 overall and it looks like they will have a great chance to keep the streak going after this season. My picks are currently ranked 66th overall and with allocations with Kyle Busch and Martin Truex Jr. left; I am sitting pretty. Bristol is a risky race so we will need a little bit of luck Saturday night.

**Garage Driver:  I have been doing my best to keep everyone informed by using my Twitter account @MrFantasyNASCAR. I will do it again this week so make sure you follow me and get all of the information about the cars as I scan the drivers throughout the race.

There are 3 races left in the Fantasy Live regular season. There is no need to save allocations any more. If a driver qualifies up front and looks fast in practice, use him in your lineup. I plan to use my last allocation with Kyle Busch this week. He has won the last two races at Bristol so this should be a great track to use him at.

Kyle Busch (1): I plan to burn my last allocation with Busch this week. He has won the last two races at Bristol and led over 115 laps in both of them. He has also averaged 17 Stage points in those races. I may change my mind if Busch does not qualify up front but there is a great chance that the No. 18 car wins the pole Friday. Busch won the pole for the race in April at Bristol so I expect him to be fast again this week.

Kyle Larson (3): I would not be surprised if he won the race Saturday night. Larson dominated the race at Bristol in April. He qualified 6th, led a race-high 200 laps, spun out twice and finished 2nd. That is quite a day. Larson has a series-best 126.7 driver rating in the last two seasons at Bristol. He said after the race last week that Bristol is his favorite track. Larson has never won at Bristol but he has led at least 70 laps in the last 3 races in Thunder Valley and led the most laps in 2 of the last 3 races at the track.

Brad Keselowski (1): I was worried about using Keselowski for this race because the No. 2 car was in a slump. After his 2nd-place finish at Michigan, I am not worried any more. Keselowski had one of the best cars in the April race at Bristol. He qualified 3rd, led 67 laps, won both Stages but was caught up in an accident at the end of the race. Keselowski has 2 wins in Thunder Valley on his resume. A win Saturday night would really help him playoff resume. I expect Team Penske to give Keselowski their best car this week so he can get to Victory Lane.

Ryan Blaney (3): Blaney came out of nowhere to dominate the last race at Bristol. He had some decent runs in Thunder Valley in his career but nothing suggest he would run down Kyle Busch and lead 100 laps in the race. After the race at Michigan Blaney said, “I cannot wait to get to Bristol next week. My teammates taught me some stuff before the last race and it just clicked in April. I cannot wait to do it again.” I have a feeling Blaney will have one of the fastest cars Saturday night. I want to make sure Blaney is on my team just in case the No. 12 team shows up with the same speed they had in April.

Erik Jones (4): Jones came close to winning his first race in the MENCS in this race last year. Jones won the pole, led 260 laps and finished 2nd. He ran well in April but the results do not show it. Jones qualified 13th and was running 6th when he was caught up in an accident. Bristol ranks as the No. 1 track for Jones in the Xfinity Series. He won the pole for 3 of his 5 races in the lower series and went to Victory Lane twice (one time beating Kyle Busch). Jones knows how to get around this high-banked track.

My Garage pick will be Ricky Stenhouse Jr. (7) or Jimmie Johnson (8). Stenhouse has been a beast at Bristol. He has competed in 11 races in the MENCS at the track and has a top-10 average finishing position. But do I trust Wrecky Stenhouse with a spot on my team? If he posts fast laps in practice and qualifies up front; Stenhouse will be in the Garage Saturday night. Jimmie Johnson will be my backup plan. Johnson has been one of the best drivers at Bristol. Over the last four races he has a 5.5 average finishing position, including a trip to Victory Lane last year. Johnson also finished 3rd in the April race at Bristol. If Johnson qualifies up front and looks good in practice, he may be in my starting lineup Saturday night.

My Fantrax Bronze Point Salary Cap Game continues to roll along. The picks were not looking good when Martin Truex Jr. was leading the race but once he ran out of fuel my team moved to first place in my league standings. It was the fourth consecutive week at the top of the standings and now I am starting to separate myself from the field. I hope you are having similar success with your team.

I thought about selling A.J. Allmendinger last week but decided to hold onto him. This week I am thinking about selling him for Ricky Stenhouse Jr. I want to see how Stenhouse qualifies and runs in practice before I make my final decision. This is the best track for Stenhouse and having him in our lineups could payoff this week.