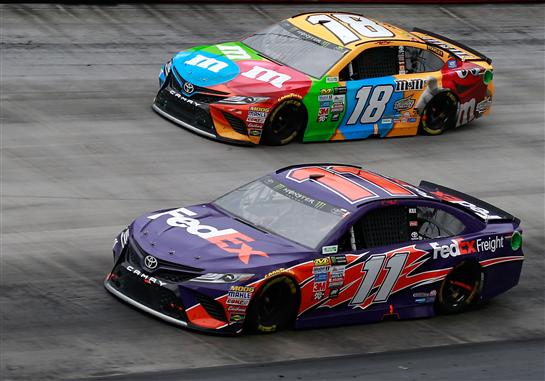 The Monster Energy NASCAR Cup Series will travel to Bristol Motor Speedway this week for the Food City 500. Weather has been quite the problem this season and no track has more problems with the weather than Bristol. The forecast right now is for 70% chance of rain Sunday. I sure hope they are wrong.

The 2017 Food City 500 was run on a Monday last year because of rain on the weekend. Hope that doesn’t happen this week!! The race was dominated by Kyle Larson. He won the pole and led 202 laps before his old tires made him fall to 6th at the end of the race. Martin Truex Jr. also had a good race. He led 116 laps and finished 8th. The No. 48 team slowly worked their way to the front and Jimmie Johnson was able to win for the second time at Bristol and his 84th win of his career. This race could have been much different if Kyle Busch was not involved in an early race accident.

This is the week when you need to pay attention to the practices and qualifying. Track position is very important at Bristol because drivers who start in the back can go a lap down in the first 2 minutes of the race. You must have the dominators this week. Plain and simple! If you do not have them, you will not win any money. So the best way to find out who will dominate this race is to check out FantasyRacingTips.com of course, but also check the practice speeds.

The drivers I expect to be the top dominators this week are: Kevin Harvick, Kyle Busch, Kyle Larson, Erik Jones and Martin Truex Jr.

The drivers who could be the top value picks for the race Sunday include: Ricky Stenhouse Jr., Clint Bowyer, Jamie McMurray and Ryan Newman

The drivers I expect to be the best cheap drivers for the race Sunday include: Matt Dibendetto, Kasey Kahne, Trevor Bayne, Corey Lajoie and Landon Cassill

I will post my final DraftKings picks Saturday night after the Xfinity Series race.

The run could not last forever. After 6 great races to start the season, my Fantasy Live picks did not live up to expectations at Texas. First Martin Truex Jr. had a tire go down and pancaked the wall. Then we took Brad Keselowski out of the garage only to see him slam into Denny Hamlin midway through the race. My picks are still beating 99.9% of the entries and rank 333rd in the overall standings. We need a good race at Bristol to climb back to the top.

*** My final picks for Fantasy Live will be posted after the final practice Saturday. I also post picks for the new NASCAR America Fantasy Live game.

Kyle Busch (6) is ultimate Boom or Bust driver this week. He is either going to win or finish last Sunday. In his last four races at Bristol, Busch has finished 1st, 35th, 38th and 39th. He has also led the most laps in the last two years at the track. I will be watching Busch closely in practice this week. If he does not dominate practice I will use another driver.

Kyle Larson (7) was the best driver at Bristol last year. He led 202 laps in the spring race and 70 laps in the fall race. He has yet to win at this track but that could change Sunday. No driver in the field was helped more from the VHT compound being added to the track to create more grooves to race on. Larson used the high line to pass a lot of cars last year. The track will once again be adding the “Track Bite” to the surface. I expect Larson to run well this week.

Erik Jones (9) said after the race at Texas that he cannot wait to get to Bristol because it is his favorite track. Jones almost won the Bristol Night Race last year. He won the pole, led a series-high 260 laps and finished 2nd. Jones must be on all teams this week. There is not better track to use an allocation with him at.

Joey Logano (7) is a safe pick for your team this week. He has qualified in the top 10 in 13 consecutive races at a track where track position is everything. Logano has an average finishing position of 7th in his last four races at Bristol. The No. 22 team is running well this season so I expect another top-10 finish from Logano this week.

Ricky Stenhouse Jr. (10) is a safe pick this week because his stats at Bristol are amongst the best in the sport and if he does have problems you always have your Garage Driver as an insurance policy. Stenhouse has a 10th-place average finishing position in his 10 career races at Bristol. That includes finishes in second-place in 2016 and 2014. The No. 17 car ran well at Texas and I expect this team to run in the top 10 Sunday.

I plan to have Kevin Harvick in the garage this week. The No. 4 car should be the best choice in the field but this is an allocation game and we cannot use him every week. It is not a bad idea to have the best car on standby just in case you need him.

I made a big mistake in the Fantrax Bronze Point Salary Cap Game last week. I was all set to trade Jimmie Johnson for Kurt Busch and use Busch in the race. Johnson went out and posted the fastest speed in final practice so I got cold feet. I decided to give Johnson one more chance. Well, I am officially done with “Seven Time.” He will be traded this week, but I will wait until Saturday to see which driver I am trading him for. It will most likely be Kurt Busch.

Another trade I may be making is trading AJ Allmendinger for Ricky Stenhouse Jr. The No. 17 car is very good at Bristol and his low salary will give me another strong driver in my lineup.