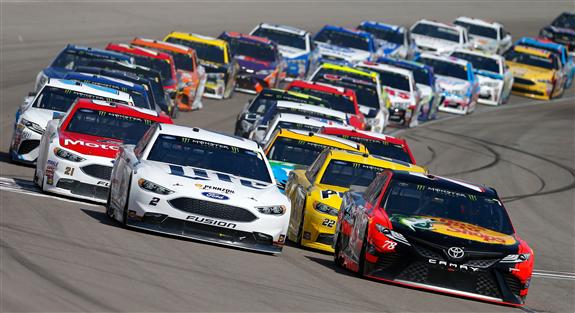 The Monster Energy NASCAR Cup Series will travel across the country this week to compete in the Pennzoil 400 at Las Vegas Motor Speedway. The race can be seen Sunday at 3:30 p.m. ET on Fox.

The race at Atlanta was a driver’s race. The driver could search the track to find a groove to make his car go fast. That is not the case at Las Vegas.

The race this week will be in the hands of the crew chiefs. Teams must find the perfect balance to get their cars to rotate through the corners but be tight enough so they do not slap the wall. The track also changes more throughout the race then almost any other track on the circuit. The crew chiefs must adjust the car throughout the race to keep up with the changing track conditions. The setup that works well at the beginning of the race will be junk at the end of the Pennzoil 400.

Each team was allowed to send one car to the tire test at Las Vegas in January. The temperatures at the tire test were similar to what the temps are forecasted to be this weekend (mid-50s). The teams that ran well in the test should unload with a lot of speed Friday. Here are the results from the test…

I love playing the Fantasy Live game but keeping every one up-to-date on my Garage Driver has become a real pain in the butt. I have been doing my best to keep everyone informed by using my Twitter account @MrFantasyNASCAR. There was a caution at the end of Stage 2 last week and I had about 2 minutes to make a decision, post it on Twitter and update my 5 teams. I wanted to use an allocation with Clint Bowyer and save Martin Truex Jr. at Atlanta but by the time I posted it on Twitter it was too late for me to update my teams. I will continue to do my best to keep you posted on what I plan to do with my Garage Driver, but sometimes that late cautions will prevent me from doing so.

** My final picks for Fantasy Live will be posted after the final practice Saturday. Here are the drivers I have penciled in right now…

Martin Truex Jr. should have a lot better race this week then he had at Atlanta last week. Truex won this race last year and he will be a threat to do it again Sunday.  The No. 78 team had problems in inspection before qualifying and problems with the pit guns not working during the race. The team talked to NASCAR about this and I am sure they will have it worked out before the race Sunday. Truex won 7 of the 11 races on 1.5-mile tracks last year. This is almost a home race for the No. 78 team so I expect them to perform well.

Brad Keselowski had this race won last year until his car blew up on the last lap. It would have been Keselowski’s 3rd win in his last 4 races at Las Vegas. The best crew chief at setting up a car and making adjustment during the race at Las Vegas is Paul Wolfe. I expect the No. 2 car to be the most dominant car in the race this week.

Joey Logano is just as good as his teammate, Brad Keselowskiat Las Vegas. Logano has the 2nd-best driver ranking and a series-best average finishing position in the last three races at the track. Last year he qualified 6th and finished 4th in the race before Kyle Busch fed him the 5 knuckle sandwich on pit road after the race. I do not expect any retaliation from Busch this week because each of these teams will be focused on winning the race. Not getting revenge.

Ryan Blaney has always run well at Las Vegas and I think he will be even better this week since he has Brad Keselowski and Joey Logano as teammates. Blaney told Jeff Gordon during the rain delay last week, “I am really looking forward to racing at Kansas and Las Vegas. Those are my two best tracks. I always seem to run well there.” Blaney has the fourth-best driver rating (102) and the fifth-best average finishing position (6.5) in the last three races at Las Vegas. This is a great week to use an allocation with the No. 12 car.

Kyle Busch has one career win at his home track (2009) and he would love to add another. His stats in the last three races do not represent how good he has been in Sin City. Busch was running 3rd in this race year when Joey Logano got loose and sent Busch into the wall. Without that wreck, Busch would have an average finishing position of 5.5 in the last 4 races at Las Vegas. Busch scored the 3rd-most points on the 1.5-mile tracks last year. He will be trying for the Busch-Triple this week since he will drive in the Camping World Truck Series, Xfinity Series and MENCS races this weekend.

Kyle Larson is likely to be my Garage Driver this week. He finished 2nd in this race last year and scored the 4th-most points on the 1.5-mile tracks in 2017. The other driver I will be considering is Kevin Harvick. The No. 4 car will have momentum after winning last week and Harvick dominated this race 3 years ago.

It was another mediocre week for my picks in the Fantrax Bronze Point Salary Cap game. I was really surprised to see Brad Keselowski perform so well after running outside the top 25 in all of the practice sessions. He was even outside the top 15 on the fastest 15-lap speed chart. I learned my lesson so I plan on turning this ship around this week.

I will give Jimmie Johnson one more week to perform well. Las Vegas is one of the best tracks for the No. 48 team and if he cannot run well Sunday, he probably will struggle all season. I am thinking about trading him for Joey Logano. I will let you know Saturday if I decide to pull the trigger.