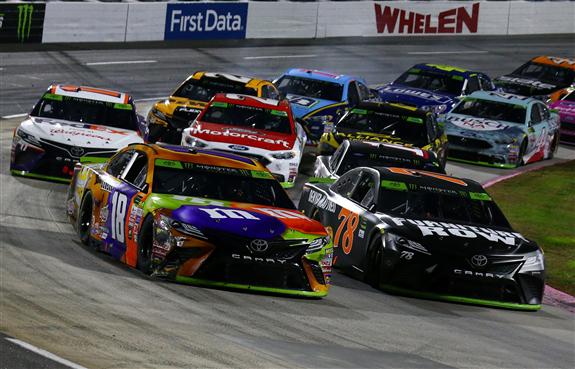 The Monster Energy NASCAR Cup Series will return to the East Coast this week for the STP 500 at Martinsville Speedway.  The race can be seen Sunday at 2 p.m. ET on Fox Sports 1.

Last year Kyle Busch was the most dominant driver in this race. He led 274 of the 500 laps. Busch was leading the race at the end of Stage 2 when Ricky Stenhouse Jr. decided to move Busch out of the way to get back on the lead lap before the caution to end the Stage. The No. 2 Miller Lite team worked on their car the entire race and at the end Brad Keselowski had the car to beat. Keselowski outraced Busch to the checkered flag to win his first Grandfather Clock.

Martinsville is a .5-mile flat paperclip shaped track. There is no track on the circuit where track position means as much as it does at Martinsville. It is very tough to pass here. The drivers who can out-brake the competition and get into the throttle quickly out of the corners are the drivers to beat. It is a rhythm track and drivers either are very good at it or they will struggle all race long. There is little middle ground at the tough paperclip.

Kyle Busch should be the driver to beat at Martinsville. He has an average finishing position of 2.25 and led 813 laps in the last four races at the track. The last time Busch did not finish in the top five at Martinsville was in 2014. The No. 18 car is as close as you will get to a lock for a top-five finish Sunday.

Denny Hamlin has five Grandfather Clocks in his collection for winning at Martinsville. It is no secret that Hamlin likes to race at his home track. Hamlin made a big mistake when he taught Kyle Busch how to turn fast laps at Martinsville when Busch joined Joe Gibbs Racing. Hamlin has been playing bride’s maid to Busch ever since he taught Busch the rhythm of the track. Hamlin may not win, but I will take a 2nd-place finish from him this week.

Jimmie Johnson could start a clock company when he retires from NASCAR because he has a garage full of Grandfather’s clocks from his 9 wins at Martinsville. I was worried about him in this race this week, but his 9th-place finish at Auto Club Speedway makes me feel a lot better about this pick. Johnson has 19 finishes in the top five and led 2,863 laps at this track. If his car is halfway decent this week, Johnson should finish in the top 10.

Clint Bowyer has been very good at Martinsville. The track ranks as his 4th-best track. If you take away the races when Bowyer was driving the HScott Motorsports car, Bowyer would have 9 finishes in the top-10 in his last 10 races at the track. Last year Bowyer finished 3rd and 7th at Martinsville. He is running a lot better this year, so I would not be surprised if Bowyer broke his 190-race winless drought.

Joey Logano is almost a lock to start on the front row this week. The No. 22 car has won 4 poles in his last 6 starts at Martinsville. Logano has started on the front row in 6 of the last 7 races. No driver can qualify at the tricky paperclip as well as Logano. His average finishing position in these races is 13th, so although he starts up front he may not finish up front. I would like to have him in the Garage just in case he does put it all together this week.

My Fantrax Bronze Point Salary Cap picks were killed last week by Kevin Harvick and Darrell Wallace Jr. Harvick had the car to beat in all of the practices and he broke the track record in qualifying. We had to use him in our lineups. I used Wallace because I was afraid Alex Bowman’s engine may blow up in the race last week. The No. 88 team was having problems in final practice so I played it safe with Wallace. Big mistake!

It is time for a bounce back race. I am still in the money in my league and I hope you are too. If you are not… do not panic, we have 31 races to get to the top.

* We are allowed 12 trades during the season. I decided to trade Ricky Stenhouse Jr. for Clint Bowyer. The No. 14 car is running too well right now to ignore and he is nearly the same price as Stenhouse. I plan to use Bowyer in the race this week.

** This is the best track for AJ Allmendinger. He has finished 6 of the last 8 races at Martinsville in the top 11. I am trading Darrell Wallace Jr. for AJ Allmendinger this week.  I am giving up on Wallace. I just do not think he is a good driver.