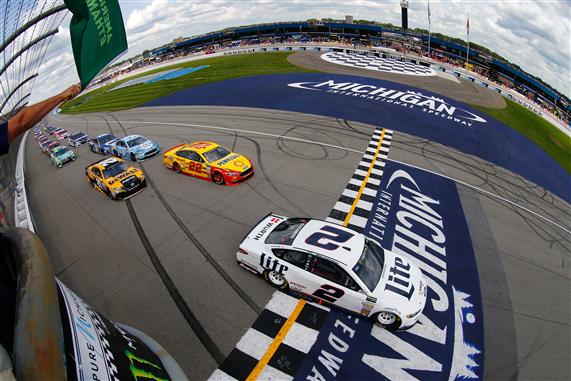 The Monster Energy NASCAR Cup Series will compete at Michigan International Speedway this week for the FireKeepers Casino 400. If you like speed, this is the race for you. Michigan is the fastest track on the schedule. The race can be seen Sunday at 2 p.m. ET on Fox.

The MENCS will be back to a regular schedule this week. There will be a practice Friday morning (11:35 a.m. ET), qualifying Friday evening (4:10 p.m. ET) and two practices Saturday morning (9 a.m. ET and 12 p.m. ET). We should get a good idea who is fast once the field is set and the teams had time to turn some laps in practice.

The last race at Michigan was dominated by a Michigan native. Brad Keselowski won the pole and led 105 of the 200 laps. The No. 2 car kept getting tighter in the race and Keselowski fell back to 17th place. Martin Truex Jr. took over the lead from Keselowski and led 57 laps. The No. 78 car looked very strong in this race. There was a wreck at the end of the race which caused it to go into overtime. Kyle Larson restarted 3rd and outraced Truex to take the lead and ear a trip to Victory Lane. It was the third win in a row for Larson at Michigan.

Michigan was repaved in 2012 and ever since it has been the fastest tracks on the circuit. The track has some wear and there are now multiple groves to race on. The speeds are fast but sometimes the racing gets boring because the cars get spread out. This race does not produce many cautions and this year the cautions have been down so we should expect a lot of green flag racing Sunday. The drivers who have had speed all season will be the ones running in the top 10 this week.

There are 200 laps in the race Sunday and that means there will be 100 points available for fastest laps and 50 points available for leading laps. Five out of the last six races at Michigan had the same trend. One driver led between 100-125 laps, another driver led 35-45 laps and the rest of the laps were spread throughout the field. These two dominators also scored the most fastest laps because clean air is king at Michigan.

I would have loved to have seen NASCAR use the rules package they used at the All-Star Race at Michigan but it would have been impossible for the teams to get ready in time. So we are back to the racing we are used to. I expect one driver (not sure who yet) will lead at least 125 laps in the race Sunday. Caution flags are way down this season so there should be a lot of green flag racing and it is very tough to pass the leader in this downforce package. We must have the driver who leads the most laps in our lineup Sunday. I plan to select at least two dominators for each team.

The drivers I expect to be the top dominators this week are: Martin Truex Jr., Kevin Harvick, Kyle Larson, Kyle Busch and Brad Keselowski

The drivers who could be the top value picks for the race Sunday night include: Chase Elliott, Erik Jones, Clint Bowyer, Ryan Blaney and Aric Almirola

The drivers I expect to be the best cheap drivers for the race Sunday night include: Daniel Suarez, Kasey Kahne, AJ Allmendinger and Chris Buescher

Fantasy Live continues to be my best game. I had another strong week at Pocono but my picks only moved up 1 spot in the overall standings. My picks are ranked 62nd overall and I can see cracking the top 50 is going to be difficult. We still have 12 races left in the season so I plan to move up each race until we crack the top 10.

Kyle Larson (4): If you do not use Larson this week you probably should not use him all year. This is by far his best track and his stats at Michigan are better than Kevin Harvick’s at Phoenix. Larson has won the last 3 races at Michigan. His average finishing position in the last five races on the 2-mile tracks is 1.2! Larson finished 1st, 1st, 1st, 1st and 2nd! The No. 42 car is almost a lock for top-5 finish Sunday so I definitely will have Larson in my lineup.

Martin Truex Jr. (4): The No. 78 team looks like they are regaining their 2017 mojo. Truex Jr. has finished 1st, 2nd and 2nd in the last three races. He also won the last race on a 2-mile track (Fontana). Truex has never won at Michigan but that could change this weekend. Truex finished 2nd and 6th in the two races at the track last year and he led at least 50 laps in both. The No. 78 team will have some momentum after winning the race last week.

Brad Keselowski (7): Keselowski is a Michigan native and he said winning a race at his home track would be bigger than winning the Daytona 500. You would have to think Team Penske will put a lot of effort into getting Keselowski a win at this track. They almost did it last year. Keselowski won the pole and led 105 of the 200 laps before he fell to 17th at the end of the race. His average finishing position in the lasr 8 races at Michigan is 8.25 so he should have a great chance to finish in the top 10 this week.

Chase Elliott (7): I have been saving Elliott until he started to heat up. It looks like Hendrick Motorsports found some speed over the All-Star break and it is now safe to start using Elliott in your lineups. Michigan ranks as the 2nd-best track for Elliott. He is almost as good as Kyle Larson at this track. Elliott has finished 2nd, 2nd, 2nd and 8th in his 4 races at the track. If it were not for Larson winning all of the races, Elliott might have 3 wins at the track. This is a great race to use Elliott in your lineup.

Erik Jones (7): Jones is a Michigan native and he is very good at his home track. Jones finished 3rd and 13th in his two races at Michigan last year. Earlier this year he qualified 4th and finished 7th at Fontana. The Joe Gibbs Racing cars have been fast this year. Jones will qualify up front and his car will have the speed to stay up front. The No. 20 team just needs to stop beating themselves in the pits.

I plan to have Joey Logano (2) in the garage this week. He should be a great insurance policy this week. Logano has been one of the most consistent drivers this season. He has 11 finishes in the top 10 and his stats at Michigan are good too. Logano has 2 wins at Michigan and he has finished 9 of the last 10 races at the track in the top 10. Logano is almost a lock for another top-10 finish Sunday.

My Fantrax Bronze Point Salary Cap picks finally bounced back last week. I finished No.1 in my league and it would have been a lot better if Clint Bowyer did not miss a shift on the last restart and fall back in the pack. There is still plenty of time to win our leagues so do not panic yet. The picks have been good; we just need some luck to go our way.