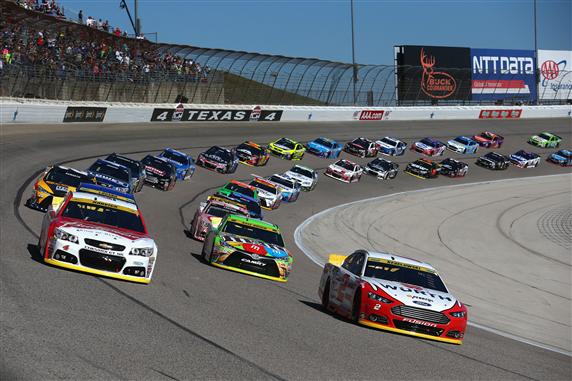 The Monster Energy NASCAR Cup Series will travel to Texas Motor Speedway this week for the O’Reilly Auto Parts 500. People say “Everything is bigger in Texas.” Track president Eddie Gossage likes to bring that slogan to the race track. The race is 500 miles instead of the traditional 400 miles and the drivers can watch how their car is performing on “Big Hoss”… The world’s largest TV screen located on the backstretch. This is usually one of the best races on the 1.5-mile tracks, but I do not think it needs to be 500 miles.

Kevin Harvick won the pole and dominated the early portion of the 2017 O’Rielly Auto Parts 500. The No. 4 car led 77 laps before his team took 2-tires and it was the wrong call, dropping Harvick back in the field. Ryan Blaney then took over the race and led 148 laps. Blaney won Stage 1 and Stage 2 before Martin Truex Jr. took over and led 49 laps. The No. 48 team kept working on their car and with 16 laps left, Jimmie Johnson outraced Joey Logano to win the race.

The most important thing to know this week is the length of the race. There are 334 laps in the race Sunday instead of the traditional 267 in normal races on the 1.5-mile tracks. That means there will be 83.5 points available for leading laps and 167 points available for fastest laps. The driver who leads the race usually scores the fastest laps as well because the car is in clean air and does not have to deal with traffic.

Usually we try to select no more than two dominators on tracks of this length. We will have to focus more on the dominators this week because of the extra 67 laps in the race. My top dominators are predicted to be Kevin Harvick, Martin Truex Jr., Kyle Busch and Ryan Blaney.

Kevin Harvick has led 470 laps in the last 5 races on the 1.5-mile tracks. That is 190 laps more than any other driver in the field. Harvick dominated the races at Atlanta and Las Vegas this year. He also dominated the first half of the race at Texas last year. The No. 4 car has to be considered the top dominator this week.

Martin Truex Jr. was the King of the Intermediate Tracks until Kevin Harvick ran him down and passed him for the win at Texas last November. Truex has still been very good. He has led the 2nd-most laps (283) on tracks of this size since the last race at Texas. Truex also scored the 2nd-most DraftKings points in the two races at Texas Last year. He should be a great pick to dominate this race.

Kyle Busch is quickly earning a nickname he really does not want… Mr. Second Place. Busch has finished 2nd in 3 races this season. People talk about this like it is a bad thing. Busch has only led 19 laps on the 1.5-mile tracks this season so he does have some risk as a dominator pick. If he wins the pole I would bump his odds of dominating up slightly.

Ryan Blaney could be a sneaky dominator pick this week. He led 148 laps in this race last year. I will be watching Blaney in practice this week. Usually when he runs well in practice he performs very well in the race.

The drivers who could be the top value picks for the race Sunday include: Ryan Blaney, Erik Jones, Aric Almirola and Ricky Stenhouse Jr.

The drivers I expect to be the best cheap drivers for the race Sunday include: Chris Buescher, Trevor Bayne, Cole Whitt and Landon Cassill

I will post my final DraftKings picks Saturday night after the Xfinity Series race.

My Fantasy Live picks continued to rack up the points at Martinsville Speedway.  My drivers (Kyle Busch, Brad Keselowski, Joey Logano, Denny Hamlin and Clint Bowyer) finished #1, #2, #6, #10 and #12 in the race and scored 66 Stage Point. My picks are averaging 242 points per race (1,456 total points) and rank 259th overall. We still have some work to do to climb into the top 100.

*** My final picks for Fantasy Live will be posted after the final practice Saturday. I also post picks for the new NASCAR America Fantasy Live game.

Kevin Harvick (7) should be the driver to beat at Texas. He won the last race at Texas by running down Martin Truex Jr in the closing laps and he has not stopped dominating since. This is not the week to save drivers. I plan to use Harvick with confidence this week.

Martin Truex Jr. (8) should be in all lineups this week. He has been the best driver on the 1.5-mile tracks the last two seasons and my strategy is to use Truex on all tracks of this size in the 26 race schedule in Fantasy Live. Remember, we can always take him out if anything happens to the No. 78 car in the first two Stages.

Kyle Busch (6) is penciled into my lineup right now, but that could change after the three practice sessions. I am quickly running out of allocations with Busch, but I have a plan for him this season so do not worry. Busch has been the 3rd-best driver at the intermediate tracks this season so he should be a great pick. If another driver looks fast in practice (Erik Jones, Chase Elliott or Brad Keselowski), I will take Busch out and save an allocation with him.

Joey Logano (7) is off to a hot start and the first 8 tracks on the schedule are the best tracks for Logano. He typically runs well until May and then he cools off over the summer. I plan to keep using Logano while he is running in the top 5.

Ryan Blaney (8) dominated this race last year and I think he can do it again Sunday. I expect Blaney to qualify in the top five and stay there this week. I will watch Blaney closely in practice, but right now he is my 5th driver.

Aric Almirola is my Garage Driver right now. I would love to use an allocation with Almirola and save an allocation with one of the drivers listed above. Almirola has been very good this season on the 1.5-mile tracks this season. Las Vegas Motor Speedway is a sister track of Texas Motor Speedway. Almirola had a great race in the desert. The No. 10 team was unable to qualify their car so Almirola started 29th and quickly made his way through the field for a top-10 finish. If he has a similar race Sunday, I will not hesitate to put Almirola into my starting lineup and save one of the other drivers for another track.

The driver I will be watching in practice is Jimmie Johnson. He has 7 wins at Texas, including the race last year when he started last and made his way to Victory Lane. It is hard to trust the No. 48 team but maybe the extra week of preparation gave them time to make their car better. If Johnson struggles in practice I may trade him for Kurt Busch.