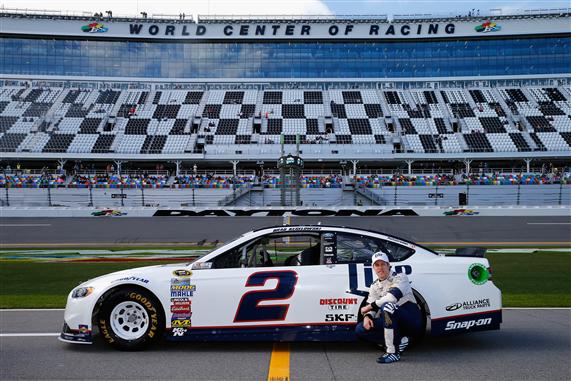 The 2017 NASCAR season is right around the corner. In order to get fantasy teams ready for the new season I decided to recap the 2016 season for my top 30 drivers and preview how I think they will perform this year. Each day I will post two driver previews until my No. 1 fantasy driver is revealed. I will continue my rankings with Brad Keselowski.

Keselowski took another step forward to becoming the best driver at the Superspeedways. He scored the most points (222.5 points) in Fantasy Live at Talladega and Daytona. He won half of the races on the Superspeedways and will be a threat to win the Daytona 500 in February.

Keselowski was also good on the road courses in 2016. He scored the second-most points (98.5 points) in Fantasy Live at Sonoma and Watkins Glen. If Keselowski can be considered a “sleeper pick” it would have to be at the two road courses.

Keselowski had more value in Yahoo Fantasy than he had in Fantasy Live. Keselowski scored many bonus points for qualifying and constantly finished up front. He scored the second-most points in Yahoo Fantasy because of his ability to start up front and finish up front. He did not score enough points for position differential in Fantasy Live to be considered an elite driver in that game.

2017 PREVIEW: Everything will be the same with the No. 2 Team Penske Ford this season. Paul Wolfe will once again serve as the crew chief and Miller Lite will be the primary sponsor. Wolfe and Keselowski are the best combination at thinking outside the box and winning races when they do not have the best car. I expect this trend to continue in 2017.

It is no secret that Keselowski has his eyes set on winning the 2017 Daytona 500. He knows that he is one of the best drivers at these tracks and winning the Harley J. Earl Trophy will be a great addition to his stellar resume.

Keselowski was placed into Group A of Yahoo Fantasy. He will be one of the best picks at Kentucky, Las Vegas, Michigan and the four Superspeedway races. He should be good for six to eight allocations in 2017.  The No. 2 car is one of the best at qualifying so fantasy teams will want to select him for bonus points when they know they will use another driver in the race (Kevin Harvick at Phoenix, Martin Truex Jr. at Charlotte and Jimmie Johnson at Martinsville).

Keselowski should have value in Fantasy Live at the tracks where he wins the pole or where he qualifies outside the top 10. When Keselowski wins the pole he usually stays up front and leads many laps. He will score many bonus points for fastest laps and laps led in these races. When Keselowski qualifies outside the top 10 he will have a good chance to make his way to the top five and score bonus points for position differential. Fantasy teams need to wait to see where Keselowski qualifies before they select him for their Fantasy Live team.