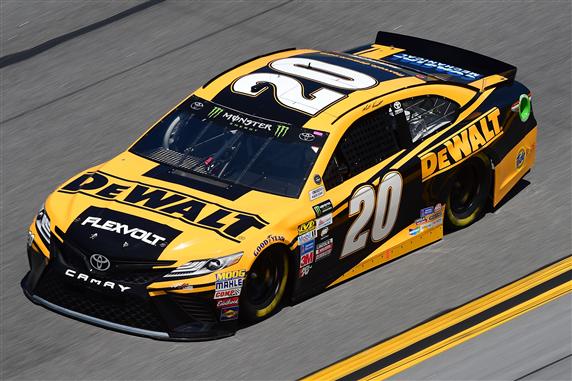 The 2018 NASCAR season is approaching fast. Fantasy NASCAR players need to start researching now so that they do not go a lap down to begin the season. One way to prepare for the 2018 season is to find the drivers who will run a lot better than people expect. If you are able to hit on these drivers early in the season, you will have a tremendous advantage over your competition.

Each season there are drivers who exceed expectations. Everyone expected Kyle Larson to be good in 2017, but most of the experts did not have him penciled in for four wins and the No. 3 fantasy driver in the sport. The same can be said for Ricky Stenhouse Jr. Did anyone have him winning two races last year? I know I did not see it coming. Erik Jones and Daniel Suarez were expected to run well but have some rookie mistakes in 2017. Both drivers exceeded expectations.

So who will be the drivers that will run a lot better than most of the experts think? Here is my list of five drivers that Fantasy NASCAR players can trust early in the season before the other players figure out how good they will be in 2018…

I know some of you are thinking, how is Chase Elliott a sleeper pick? Elliott finished fourth in fantasy value last year, but he should be even better in 2018.

Elliott still has not won a race in the MENCS. There is still a lot of room for improvement with this young driver. Last year we saw Kyle Larson go from one win to four in his 3rd season with Chip Ganassi Racing. We can expect a similar jump from Elliott in 2018 (0 wins to 3-4 wins).

The new Chevy Camaro ZL1 chassis has performed well in the wind tunnel tests. If the same results translate into speed on the track, Elliott could lead the Chevy drivers and become a top 3 pick for your fantasy team.

I have a hard time believing that some people still do not know much about William Byron. That will change very quickly once the 2018 MENCS begins.

Byron will drive the No. 24 car for Hendrick Motorsports. There is no question that the car will be fast enough to run up front. Will his lack of experience keep him from getting the car to the front? I doubt it.

Byron will have the resources of seven-time champion Jimmie Johnson and Chase Elliott to lean on this year. Crew Chief Darian Grubb has won with every driver he has worked with on a fulltime basis. The combination of Byron – Grubb should work well his season.

Clint Bowyer did not have the season that most people expected in his first year at Stewart-Haas Racing. He failed to make the playoffs and finished 15th in fantasy value. The season was not as bad as most people thought. Bowyer had six finishes in the top five and 13 finishes in the top 10. That is more than five of the drivers who made the playoffs.

Stewart-Haas Racing should perform better in their second year using the Ford Fussion chassis and the Roush-Yates engines. It always takes some time for an organization to adjust when they switch to a new manufacturer.

Bowyer will have a lot of motivation to run well this season. The No. 14 car does not have sponsorship for the entire season so Bowyer will be asked to run up front or be in danger of losing the ride. I trust that Bowyer can get the job done. I expect him to have a good season and finally go to Victory Lane for the first time since 2012 (My prediction is: Bowyer will return to Victory Lane at Sonoma).

Erik Jones had a great rookie season and he is expected to be a good fantasy pick this season. So why is Jones listed on the sleepers list? I believe he will be much better than people think.

Jones has as much talent as any young driver in the MENCS. The switch from Furniture Row Racing to Joe Gibbs Racing should be enough to get Jones to Victory Lane in 2018. Jones drove a car for a start-up team in 2017 and now he gets to drive a car for a team that has been around and been to Victory Lane many times.

Working with his mentor Kyle Busch should also help Jones in 2018. Both drivers can wheel a car around the track and the information that Busch can provide to Jones should allow him to take the step in the elite tier of Fantasy NASCAR drivers.

My prediction is that Jones will win a race (Bristol) and likely will win multiple races this season. The youth movement has started and NASCAR and Jones will be one of the young drivers making a statement in 2018.

Picking Paul Menard as a sleeper picks worries me a little bit. There is no doubt that Menard will have a car fast enough to run in the top 10 on a consistent basis. The problem is that Menard has always underperformed in his NASCAR career. Will this be the year that he puts it all together and becomes a reliable driver in your lineup? He has a lot going for him to do so.

The resources around Menard make him a good sleeper pick this year. Having Brad Keselowski, Joey Logano and Ryan Blaney as alliance teammates should help him more than having Ryan Newman and Austin Dillon did in the past. The Wood Brothers are very good at building fast cars. If Trevor Bayne can win and run in the top 15 in a Wood Brothers car, you would have to think Menard can as well.

Menard will not be an elite driver for your team, but he will be better than people think. It would not surprise me if Menard secured one of the final positions in the NASCAR playoffs.