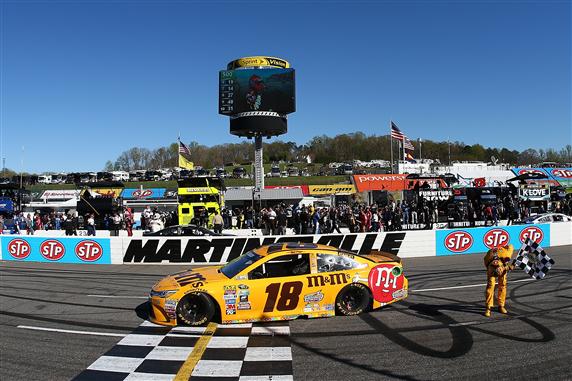 Fantasy NASCAR players who know their stats have an advantage over their competition when the Monster Energy NASCAR Cup Series competes on the short-flat tracks (Phoenix, Richmond, Martinsville and New Hampshire). There are a handful of drivers who consistently run well at these tracks and fantasy players must know who they are (We will get into the rankings shortly, but first we will provide some info about these tracks).

The most important piece of news that came from the test at Phoenix is that the cars were generating so much speed (less drag on the cars) that teams were having trouble with the brakes. This should be a common theme at all short flat track this season. The larger teams with the savviest engineers should have the advantage early in the season because they can figure out ways to cool down the brakes. These teams include: Joe Gibbs Racing, Hendrick Motorsports, Team Penske and Stewart-Haas Racing

Three of the first nine races are on short flat tracks. The drivers who perform well on these tracks at the end of 2016 should continue to run upfront this season.

Track position is always important at short flat tracks and the new Stage format should play right into the hands of Busch this season. He drives more aggressive and picks up more spots on restarts than any other driver in the field. Fantasy players should expect Busch to lead many laps at these tracks in 2017.

Busch is a must start at Phoenix, Richmond, Martinsville and New Hampshire.

2. Kevin Harvick continues to be one of the best drivers in the series at the short flat tracks. He won the race at New Hampshire last year, but it was surprising to see Harvick fail to make it to Victory Lane at Phoenix (he did finish both races at PIR in the top five). Harvick scored the third-most points (608.5) in Fantasy Live and the second-most points (682) in Yahoo Fantasy Auto Racing in 2016 at these tracks.

Will the change to Ford slow down the No. 4 team this year? That is the question that must be answered. Harvick said at the test in Phoenix that the team was looking for a baseline to begin setting up the car. This is important because the other teams already knew their baseline and were simply looking at making adjustments to gain speed. By the end of the test Harvick said the car was close to where it needed to be. He would know better than any other driver where the car needs to be at Phoenix. Fantasy teams should expect the No. 4 car to be ready to go when the series competes on the short flat tracks.

Harvick has won 14 races on the short tracks in his career. He is a must start at Phoenix, but he is also one of the best choices at Richmond and New Hampshire. Martinsville is his worst of the four tracks and fantasy teams probably can find a better driver for their team at the paperclip shaped track.

3. Joey Logano is quickly becoming a short flat track ace. He won the last race at Phoenix and always runs well at his home track in New Hampshire. Logano was much better in Yahoo Fantasy Auto Racing than he was in Fantasy Live last year because he did not lead many laps. Logano scored the third-most points (635) in Yahoo Fantasy Auto Racing, while he scored the ninth-most points (332.5) in Fantasy Live.

Logano made the most headlines at the test at Phoenix. His car was near the top of the timing sheet in all four practices and no car had better long run speed than the No. 22. It looks like Logano will have a good chance to make it back-to-back trips to Victory Lane when the series competes at Phoenix in March.

Joey Logano is an excellent choice at Phoenix and New Hampshire.

4. Kyle Larson has never won at a short flat track, but he is quickly becoming one of the drivers who can compete with the top three (Kyle Busch, Kevin Harvick and Joey Logano). Larson got off to a slow start in 2016, mainly because it took some time for him to get used to his new crew chief, Chad Johnston. His stats on the short flat tracks would have been much better if he ran as well early in the season as he did at the end of 2016.

Larson finished third at Phoenix, third at Martinsville and second at Richmond. He scored the 10th most points (320) in Fantasy Live and the sixth-most points (614) in Yahoo Fantasy Auto Racing in 2016 at these tracks. He should be much better this year in the new reduced downforce package car.

Larson was one of the best drivers in the test at Phoenix last month. He had the fastest car in two of the four practice sessions and finished second in another. He was one of the four drivers (Kevin Harvick, Joey Logano and Dale Earnhardt Jr. were the other three) who finished all of the practices in the top five.

This could be a breakout season for Larson. Fantasy teams should expect him to win multiple races in 2017 and it would not surprise us to see one of the wins come at one of the four short flat tracks (Phoenix, Martinsville, Richmond or New Hampshire).

Larson will be one of the best choices at Phoenix and he is also good at Martinsville and Richmond. It seems as though he is still learning his way around New Hampshire so there may be better options for your fantasy team at that track.

5. Denny Hamlin has always been considered a short flat track ace. He has 11 career wins at these tracks, including a trip to Victory Lane last year at Richmond.

Hamlin is an excellent choice in all fantasy games at these tracks. He scored the fifth-most points (439) in Fantasy Live and the fourth-most points (633) in Yahoo Fantasy Auto Racing last year on the short flat tracks.

Joe Gibbs Racing seemed to have an advantage over the field last year at these tracks. Kyle Busch (Martinsville), Carl Edwards (Richmond), Matt Kenseth (New Hampshire) and Hamlin (Richmond) all won races at the short flat tracks. The JGR cars should be fast at these tracks in 2017 as well.

Hamlin is a must start at his home track in Martinsville (he has five Grandfather clocks), but he is also a good choice at Richmond, Phoenix and New Hampshire.

6. Jimmie Johnson is a good short flat track driver and he could be even better this season. No driver is better at Martinsville than Johnson. He has nine Grandfather clocks, including one from last season. He also has four wins at Phoenix (but his last came in 2009 before the track was reconfigured), three wins at New Hampshire (his last win came in 2010) and three wins at Richmond (his last win was in 2008).

The reason why Johnson may be better this year is because of the Stage format and the way points are awarded this season. Usually Johnson won a race early in the season at Atlanta, California or Las Vegas and he did not need to win the races on the short flat tracks. That will change this season because bonus points will carry over through the round of eight in the playoffs.

Chad Knaus is one of the best crew chiefs in the sport. He knows how to set up a car for the short flat tracks when he needs Johnson to run up front. Johnson is a must start at Martinsville but fantasy teams may want to save allocations with the No. 48 car for races on the intermediate tracks in the Yahoo Fantasy Auto Racing game.

7. Matt Kenseth drives for Joe Gibbs Racing and that makes him one of the top drivers at the short flat track. His car had a lot of speed at these tracks last year and the No. 20 should be fast again in 2017. Kenseth won the first race at New Hampshire and finished second in the last race at the track. He will be one of the favorites at Loudon this season.

Kenseth scored the fourth-most points (576) in Fantasy Live and the ninth-most points (566) in Yahoo Fantasy Auto Racing on the short flat tracks in 2016. Kenseth was so good because he was able to lead 424 laps in these races.

If it is true that brakes will be an issue at these tracks this year, Kenseth may climb higher on the list. Kenseth is one of the best drivers at managing his tires and taking care of his brake. He will not overdrive the car.

Kenseth is a must start at New Hampshire and he is an above driver at Phoenix, Richmond and Martinsville.

8. Brad Keselowski runs well at the short flat tracks but there is a drop-off between Keselowski and the top seven drivers on this list. Keselowski usually finishes in the top five at these tracks but he doesn’t lead many laps and he hasn’t won any of these races since 2014.

Keselowski scored the seventh-most points (375) in Fantasy Live and the eighth-most points (598) in Yahoo Fantasy Auto Racing at the short flat tracks in 2016. Since strategy will play a more significant role this season (teams using strategy to earn points for finishing in the top 10 in each Stage), Keselowski should perform better at these tracks in 2017.

Keselowski is worth consideration at Martinsville and New Hampshire. He is just “OK” at Phoenix and Richmond.

9. Dale Earnhardt Jr. is often forgotten at the short flat tracks because he usually does not win the race. He is very good at finishing in the top five though and that makes him a good fantasy pick for your team.

Earnhardt turned the fastest lap at the test at Phoenix (26.555 seconds). He finished all four practices near the top of the timing sheet. Earnhardt said he was “Just trying to get used to the car again.” If he can run that fast when he is just getting comfortable with the car, just think what he should do when the series returns and Earnhardt has three races to get comfortable.

Earnhardt will be a good choice at Phoenix and Richmond.

10. Kurt Busch probably will not win any races on the short flat tracks in 2017 but he has a great chance to finish all eight in the top 10. Busch is one of the safest drivers to use on your fantasy team at these tracks. He usually stays out of trouble and finishes with enough points to keep your team competitive.

Like Harvick, it will be interesting to see how the switch to Ford affects Busch this year. Tony Gibson is a veteran crew chief and if anyone knows how to set up a new car, it would be him. Busch will be a much better choice in Yahoo Fantasy Auto Racing since he was placed into Group B. He does not lead enough laps to be considered for Fantasy Live at the short flat tracks.