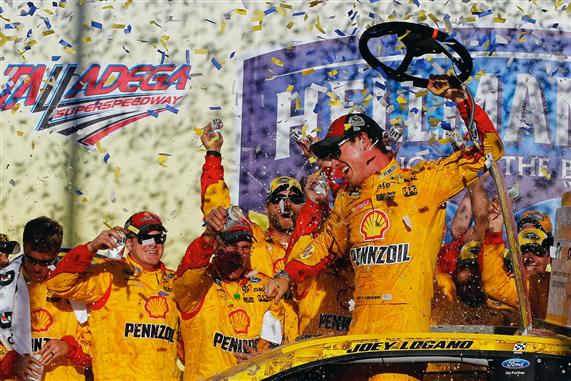 The Monster Energy NASCAR Cup Series travels to Talladega, Alabama this week for the GEICO 500. The race can be seen Sunday at 2 p.m. ET on Fox. Be sure to test your knowledge of NASCAR by competing in the Fox Sports Fantasy Auto Racing game.

Talladega Superspeedway is the biggest and fastest track on the NASCAR circuit. It is also the hardest race to predict because one mistake in the middle of the pack can take out half of the field. Drivers spend the entire race trying to put their car in a position to make a run for the checkered-flag. The days of riding in the back of the pack are over. The best place to be is up front and most drivers will do whatever it takes to stay ahead of the “big one.”

While it is hard to predict who will win at Talladega, the strategy for selecting your drivers is quite easy. This race requires fantasy teams to try and earn as many position differential points as possible. The scoring system for the Fox Sports Fantasy Auto Racing game rewards drivers who improve their position in the race more than the drivers who lead the most laps so selecting drivers who start up front will not help your team.

Fantasy teams must select drivers who qualify outside the top 25 Sunday. Do not worry about spending the entire salary cap or not having the most popular drivers in your lineup. This race is 50 percent skill and 50 percent luck. Any driver who starts their engine Sunday has a realistic chance of finishing in the top five this week.

The best lineup in the Fox Sports Fantasy Auto Racing game at Daytona had four drivers who started outside the top 30. The lineup consisted of Ryan Blaney (Started 36th and finished 2nd), AJ Allmendinger (Started 38th and finished 3rd), Paul Menard (started 33rd and finished 5th), Joey Logano (Started 15th and finished 6th) and Martin Truex Jr. (started 35th and finished 13th). The lineup looked horrible on paper but it scored 308 points. Do not worry about the names of the drivers; just make sure they start deep in the field this week.

Joey Logano ($12,800) is the driver to beat Sunday. He is becoming one of the best restrictor-plate drivers in the sport. Logano has won two of the last three races at Talladega and he has the second-best average finishing position in the last eight races on the Superspeedways. Jimmie Johnson won back-to-back races this season and now it is Logano’s turn to make consecutive trips to Victory Lane. The No. 22 car is my pick to win the GEICO 500.

Kevin Harvick ($12,200) has always been know as the closer on the restrictor-plate tracks because he usually rides in the back and makes his way to the front at the end of the race. Harvick has changed his strategy in the past four races on the Superspeedways. Harvick has learned the best way to avoid trouble is to be in front of it. Fantasy players should expect the No. 4 car to make it to the front early in the race and stay there until the checkered-flag is waived.

Chase Elliott ($11,900) has figured out how to race his car on the Superspeedways. It should come as no surprise though since his father (Bill Elliott) was one of the best at the track and still holds the track record for the fastest qualifying lap. What makes the No. 24 car so good is their ability to start up front. Winning the pole does not help fantasy teams in the Fox Sports Fantasy Auto Racing game but if Elliott were to start outside the top 25 Sunday he will be one of the best choices for your team.

Brad Keselowski ($10,900) has been great at Talladega. He earned his first trip to Victory Lane in the Monster Energy NASCAR Cup Series in the 2009 race at Talladega. Keselowski has four wins at the track and has finished nine of his 16 starts in the top 10. Keselowski won this race last year and he should be considered one of the favorites to win Sunday.

Denny Hamlin ($10,000) is better at Daytona than he is at Talladega but that does not mean the No. 11 car is a bad pick this week. Hamlin won at Talladega in 2014 and last year he qualified eighth and finished third. Joe Gibbs Racing is still looking for their first win of the season and Hamlin gives them their best chance Sunday.

Matt Kenseth ($8,900) has had bad luck in his recent races at Talladega but he should still be priced above $9K this week. Kenseth is a two-time Daytona 500 winner and he has three wins on the Superspeedways (including the 2012 trip to Victory Lane at Talladega). Kenseth is good at leading laps at this track but needs to find a way to keep his car in one piece at the end of the race. Sooner or later his luck will turn around. I would not be surprised if it happened Sunday.

Ryan Blaney ($8,400) is not the first driver that comes to mind when people think about restrictor-plate racing. Blaney has five career starts on his Talladega resume and he finished three of them in the top 10. Blaney usually follows his satellite teammates (Joey Logano and Brad Keselowski) around the track. This strategy usually puts Blaney in a position to be up front at the end of the race. He finished second in the Daytona 500 and I would not be surprised if he won his first race in the Monster Energy NASCAR Cup Series Sunday.

Austin Dillon ($7,700) is one of the best value picks in the game this week. The story that came out of the Richmond race is that the crew chief for the No. 3 car (Slugger Labbe) stayed in Charlotte to prepare the car for Talladega. We do not know if that is true or if Labbe was being punished for failing inspection five times in a row. What we do know is that Dillon is very good on the Superspeedways. His average finishing position in the last three races at Talladega is 8.6. It never hurts to have the No. 3 car in your lineup on the Superspeedways.

Dale Earnhardt Jr. ($5,500) will be the highest owned driver this week. His price is a joke. I know he has struggled this season but the best driver in the sport on restrictor-plate tracks should never be priced this cheap. Earnhardt has a series-high 10 wins, series-best 1,561 laps led and the most top-10 finishes in the races at Daytona and Talladega. It is no secret Earnhardt desperately wants to visit Victory Lane one more time before he hangs up his helmet. The GEICO 500 win be one of his best chances to achieve his goal.

Here are my pre-qualifying picks for the GEICO 500: