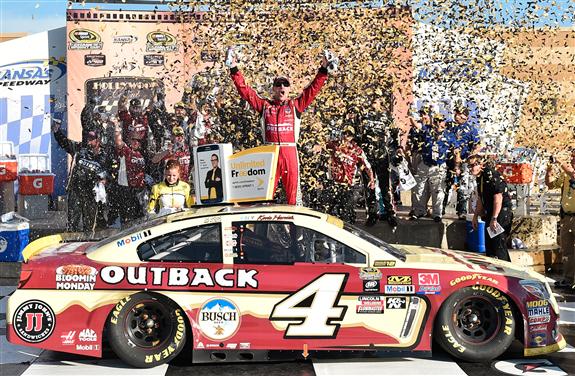 The Monster Energy NASCAR Cup Series travels to Kansas City, Kansas this week for the Go Bowling 400. The race can be seen Saturday night at 7:30 p.m. ET on Fox Sports 1. Be sure to test your knowledge of NASCAR by competing in the Fox Sports Fantasy Auto Racing game.

The race at Kansas Speedway will be the first Saturday night race for the Monster Energy NASCAR Cup Series this year. Nothing is better than seeing the cars make laps under the lights. Maybe it is because they just look faster at night. I wish NASCAR would include more primetime races on their schedule.

Kansas Speedway was repaved in 2012 and the track still does not have the surface that wears out tires like it did before the new asphalt was laid down. Passing for the lead at Kansas has become rare since it was repaved. The progressive banking was supposed to improve the racing but one driver has led at least 95 laps in every race since the track was repaved.

Track position will be important this week but drivers who do not have a fast car can make up ground on the competition in the pits. Since tires do not wear out as much at Kansas as they do on the other intermediate tracks, there should be plenty of two tire pit stops Saturday night in order for teams to get their cars to the front.

The scoring system for the Fox Sports Fantasy Auto Racing game rewards drivers who improve their position in the race more than the drivers who lead the most laps so selecting drivers who start up front will not help your team. Select drivers who start outside the top 10 this week in order to score as many position differential points as possible.

There have been four races on intermediate tracks (Atlanta, Las Vegas, Auto Club and Texas) in 2017. The drivers who performed well in these races are likely to run well Saturday night. Be sure to check out the driver standings on the intermediate tracks for the Fox Sports Fantasy Auto Racing game.

Kevin Harvick ($12,500) has been the class of the field in the Heartland. Harvick has finished the last three spring races at Kansas in second place. He won at the track last October. Harvick has a series-best 122.7 driver rating and the second-best average finishing position (5.25) in the last four races at Kansas. The No. 4 team is still looking for their first win this season. They should get the job done under the lights Saturday night.

Kyle Larson ($13,100) cannot be counted out at any track this season. He has scored the most points in the Fox Sports Fantasy Auto Racing game on the intermediate tracks. Larson finished second at Atlanta, Las Vegas and Texas and won the race at Auto Club Speedway. The No. 42 car is the safest pick in the field this week. Larson should easily finish in the top five at Kansas.

Jimmie Johnson ($12,900) should always be one of the favorites when the Cup Series competes at Kansas. He has a series-high three wins, series-best 8.9 average finishing position and the most top-10 finishes at the track (17). Johnson finished three of the last four races at Kansas in the top four (including a win in the 2015 spring race). The No. 48 car may not qualify up front but it will be there at the end of the race.

Brad Keselowski ($11,000) has been a great pick at the intermediate tracks this season. He won the race at Atlanta, finished fifth at Las Vegas, second at Auto Club Speedway and sixth at Texas. The Blue Deuce has led at least 36 laps in each of these races. Keselowski is off to a hot start this season and there are no signs of him slowing down any time soon.

Martin Truex Jr. ($9,700) is the best pick in the Fox Sports Fantasy Auto Racing game at Kansas. How is Truex cheaper than Kasey Kahne, Jamie McMurray and Kurt Busch this week? The No. 78 team has had the most dominant car on the intermediate tracks over the last year. Truex has won four races on the intermediate tracks (Las Vegas, Chicago, Darlington and Charlotte) since the last spring race at Kansas. We will know on Friday what to expect from Truex Saturday night. When this team leads the practice sessions and qualifies up front, Truex usually dominates the race as well.

Matt Kenseth ($9,200) is one of the best sleeper picks this week. It is surprising that Joe Gibbs Racing has not been to Victory Lane this season. Kenseth will give the team their best chance at winning their first race Saturday night. Kenseth has led the most laps (273) and he has the second-best driver rating (116.8) in the last four races at Kansas. He has two wins at the track on his resume. It would not surprise me to see him back in Victory Lane this week.

Ricky Stenhouse Jr. ($8,100) will have momentum following his win at Talladega. That race was not a fluke. The No. 17 car has been fast all year. Stenhouse has five finishes in the top 10 and three finishes in the top five this season. His average finishing position in the last five races is 7.6. If you want to play the hot hand, Stenhouse is your driver Saturday night.

Ryan Blaney ($8,000) is a great value pick this week. He has three starts at Kansas with Wood Brothers Racing and he finished two of them in the top 10. Blaney only has five finishes in the top five on his resume. One of them came in this race last year. The No. 21 car has been fast this year. Blaney should run up front at one of his best tracks.

Dale Earnhardt Jr. ($5,500) is a risky pick this week because the team has had no luck this season. At his current price it is worth it to take a chance with Earnhardt. The No. 88 team has shown they are capable of running up front on the intermediate tracks. Earnhardt finished fifth at Texas. He will be a great value pick if he posts fast lap times in practice Friday. Just make sure you have a rabbit’s foot in your pocket when you watch the race because Earnhardt will need all the luck he can get.

Erik Jones ($5,300) is the best value pick this week. He has consistently run near the top 10 at all of the intermediate tracks this season, but his price is amongst the cheapest in the field. Jones is a rookie but he does have experience at Kansas. He filled in for Kyle Busch in 2015 in the No. 18 car. Jones will learn a lot from his teammate, Martin Truex Jr. this week. Fantasy teams should expect another top-15 finish from the No. 77 Saturday night.

Here are my pre-qualifying picks for the Go Bowling 400: