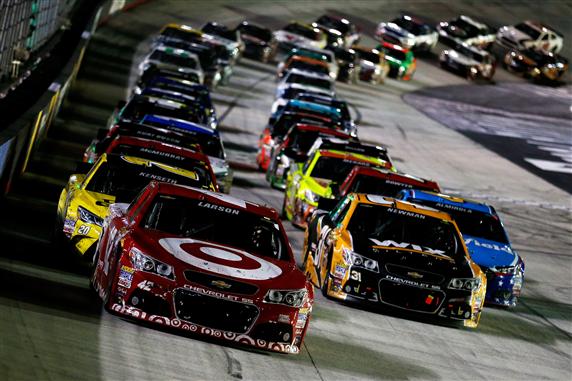 The Monster Energy NASCAR Cup Series travels to Bristol, Tennessee this week for the Food City 500. The race can be seen Sunday at 2 p.m. ET on Fox. Be sure to test your knowledge of NASCAR by competing in the Fox Sports Fox Sports Fantasy Auto Racing.

My picks have been rock solid this season. So far I am tied for eighth in the overall standings in the Fox Fantasy Auto Racing game. The top five at the end of the season win cash. Be sure to check out my picks each week to help you finish in the money this year.

Bristol is the fastest short track on the schedule. Drivers must be mentally and physically tough to make it to the front in the Food City 500. It will only take 15 seconds for drivers to complete a lap in Thunder Valley. That is a lot of turning in a short period of time. Drivers must not only fight off dizziness but also compete for track position at the same time.

The race Sunday is a wild card race for fantasy auto racing. Drivers can easily be caught up in a wreck since there is nowhere to hide at Bristol. The track is 2-miles shorter than Daytona and Talladega, but the odds of losing one of your star drivers in a wreck are about the same. This is the week where taking a chance with a cheaper driver could pay off for your fantasy team.

Track position is more important at Bristol than it is at any other track on the schedule. It is hard to pass on the short track and teams who qualify up front will be rewarded with the premium pit stalls. There is not a lot of room on pit road, so the drivers who have a clear exit out of their pit stalls have a huge advantage Sunday.

Joey Logano ($12,800) has been one of the most consistent drivers this season. He has finished six of the seven races in the top six. Logano is still looking for his first trip to Victory Lane in 2017. There is a good chance it will happen Sunday. Team Penske has been the strongest team this year and Logano is very good at Bristol. He has two wins since 2014 at the track and led the third-most laps in the last four races in Thunder Valley. Logano is my pick to take the checkered flag Sunday.

Kevin Harvick ($11,900) has been one of the best drivers at Bristol since he joined Stewart-Haas Racing. He has a series-best driver rating, led the second-most laps and he is the last driver to go to Victory Lane at Bristol. The No. 4 team has been good this season, but not as strong as they have been the last two years. Harvick should have enough speed to finish into the top five, but he will not be good enough to win the race.

Kyle Busch ($11,400) may be the best driver to ever compete at Bristol if it was the Food City 400 instead of the 500. Busch has the second-best driver rating and has led the most laps in the last four races at the track. His average finishing position of 28.33 shows he has problems when the checkered flag is waived. Busch usually dominates most of the race and then finds trouble at the end. Joe Gibbs Racing is still looking for their first win this season. Busch is their best bet to get the job done Sunday if he can just control his emotions for 500 laps.

Kurt Busch ($10,100) got off to a hot start this season with his win in the Daytona 500. The team suffered a four week hangover but started to get their season back on track after a 10th place finish at Texas. The Busch brothers grew up racing on the Bullring in Las Vegas. The track is very similar in shape and size as Bristol. Do not be surprised to see the brothers fighting it out for a win Sunday.

Matt Kenseth ($9,600) is a risky pick this week because he has not been very good this season. If the No. 20 team is going to turn their season around it could happen at Bristol. Kenseth has four wins in Thunder Valley and 20 finishes in the top 10. Last year Joe Gibbs Racing dominated the short tracks. This will be an important race for the organization. I think the team put a lot of effort into getting their cars ready to race up front at the next two short tracks (Bristol and Richmond). If Joe Gibbs Racing does not perform well Sunday it could be a long season for the organization.

Ricky Stenhouse Jr. ($8,600) is the best value pick in the game this week. Stenhouse would be one of the highest priced drivers if you covered his name and simply looked at the stats. Stenhouse has a series-best average finishing position at Bristol. He has finished four of the last six races at the track in the top six. Stenhouse was one of the highest scoring drivers in the Fox Sports Fantasy Auto Racing game in the August race at Bristol. He started 25th and finished second. Stenhouse should be on all teams this week.

Dale Earnhardt Jr. ($6,600) started to turn his season around with a fifth-place finish at Texas. Now the No. 88 team will have to carry that momentum into the race Sunday. Earnhardt Jr. has not been great at Bristol but he usually finishes in the top 10. His price is so cheap this week that a top 10 finish is all fantasy teams need out of the No. 88 car. Junior is a great pick to allow you to spend up for the higher priced drivers Sunday.

Matt Dibenedetto ($5,600) is not a name that frequents my value picks list. Dibenedetto is one of the hidden gems in the game this week. He had an average finishing position of 11.5 in his two races at the track last season. It will take a lot of guts to pull the trigger and use Dibenedetto in your lineup but it could be a gamble that could pay off Sunday.

Erik Jones ($5,000) has never competed in a Monster Energy NASCAR Cup Series race at Bristol but he has four races at the track on his Xfinity Series resume. Jones qualified on the pole in three of the four races. He won the Xfinity Series race at Bristol last year and should be able to finish in the top 15 in the Cup Series Sunday. This team has been exceeding their value all season long. Fantasy teams need to take advantage of Jones’ cheap price.

Here are my pre-qualifying picks for the Food City 500: