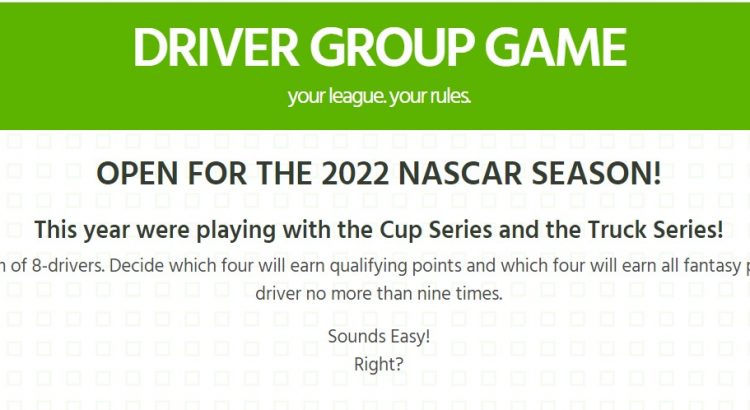 All fantasy players from the 2021 season will be placed into the leagues they were in last year. You will be able to join a new league by using the tabs on the left (click “Join League” to be placed in a new league).

Your game… Your Rues! The Driver Group Game will have new default rules this season but your league commissioner can setup the game however your league would like to play.

Each league commissioner will have a lot more control over their Driver Group Game leagues this season. Commissioners will be able to change which drivers are in each group, change the scoring, change what races are used for the league and remove members from the league.

Customizable Groups will allow the commissioner to decide which drivers are in Group A, Group B and Group C. Commissioners will also be able to customized how many times each driver is used throughout the season. If you want less than the nine default starts, you can change it to eight or however many you want.

Customizable Scoring will allow the commissioner to change the scoring for their league. If you really liked the scoring system from the previous Driver Group Game or the Yahoo Fantasy Auto Racing Game, you can remove the Stage Points and change the Qualifying Points to whatever you want for your league. You can also add the Lucky Dog (removes your lowest score for the season) if you choose to.

Customizable Races will let each Commissioner choose which races to use for their league. If your league started up late, you could start with the race at Auto Club, Phoenix or Las Vegas or any race you choose. If you want to have a regular season league and a playoff league, commissioners can choose to have their leagues end at the summer race at Daytona and have their playoffs start at Darlington. Commissioners can also have a league of all 1.5-mile tracks; all shorts tracks or whatever they want. It is in your hands.

Each driver is placed in either: Group A, Group B or Group C. The default Driver Groups for the 2022 season are:

Each team can use a driver NINE TIMES during the season (for the default settings). Once you run out of allocations with the driver, he will not score any points for your team.

The rest of the game is scored the same way it has been in the past.

For more information about the rules and different ways to set up your Driver Group Game leagues, visit the Rules Page.

* Each Trucker from Group A can be used 6 times throughout the season.