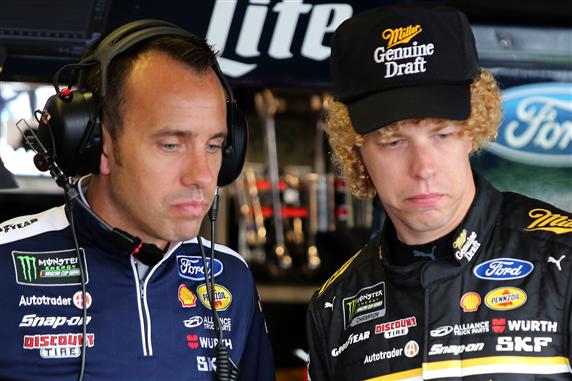 The Monster Energy NASCAR Cup Series cars practiced for the final time at Darlington Friday. There were two practices held Friday and qualifying will be Saturday afternoon. The cars will be impounded for the race Sunday night.

The weather for final practice was partly cloudy and 85 degrees. The forecast for the race Sunday night is clear and 68 degrees. The track will have a lot more grip in the race than it had in practice. I still think the cars that were fast in practice will run up front Sunday. Some of the drivers who had slower cars could pick up some speed because the track will have more grip.

Teams have four sets of tires for the weekend. Most teams used 1 set in the first practice. Made a long run in final practice and then put a new set on at the end of final practice to make a qualifying run. The last set is saved for qualifying on Saturday.

Four drivers participated in a tire test at Darlington last month. Kyle Larson, Brad Keselowski, Erik Jones and Ryan Newman should all be fast this week.

Michael McDowell, Reed Sorenson and Corey LaJoie had a 15 minute penalty in the first practice for being late to inspection at Bristol.

Kyle Larson and David Ragan had a 30 minute penalty for final practice for failing tech inspection 3 times at Bristol.

Chase Elliott: Elliott started practice by practicing getting on and off pit road. He was happy with the car. He said it had “good balance.”

Jimmie Johnson: It was a quiet practice session for Jimmie. He ran just inside the top 10 but nothing special. It is hard to tell if the No. 48 team will show up Sunday night or will they wait until the playoffs to bring out their best stuff?

Dale Earnhardt Jr.: Junior made a long run and said, “It just feels weird.” The team changed the rear shocks and made a spring adjustment. After the adjustments Junior said, “It felt like I had less control — not as locked down as the run before. It felt like it had less bar, like it was loose in…carrying everything on the front, like it could tip over.”

Kasey Kahne: Kasey reported the car was too tight. The team made some adjustments and his lap times improved.

Kevin Harvick: The No. 4 car was held 15 minutes in final practice for failing inspection at Bristol. After a short run Kevin said, “This Black Stallion is fast. We are picking up we’re we left off here last year. Good job guys.”

Clint Bowyer: Bowyer was not happy in the first practice. His crew chief told him, “Get all you can out of it so we can get a gage of where we are at.” Clint replied, “I am driving it as hard as I can!!” They team made a shock adjustment between practices and Clint was 4th fastest on his first run.

Kurt Busch: Kurt said, “The car starts out fast but it gets tighter and tighter the longer I get into the run. It is not as bad in 1 and 2 as it is in 3 and 4.” Tony Gibson brought him in to make some adjustments. When Kurt returned to the track he was 2nd-fastest on the speed chart.

Danica Patrick: The No. 10 team was having a problem with the car hitting the splitter entering the turns. She was not happy with the car in race trim but said it had good balance in qualifying trim.

Kyle Larson: Larson was the fastest in the first practice. He had to serve a 30 minute penalty in final practice for failing inspection at Bristol. Larson made a long run to start final practice and went straight to the top of the speed chart. He said it was too tight entering turns 1 and 3 but not bad through the center and on the exit of turns 2 and 4.” The No. 42 car is racing the No. 18 car so they can earn the bonus points for finishing 2nd in the regular season standings. The team kept an eye on Kyle Busch in practice.

Jamie McMurray: Jamie liked his car in both practices Friday. It was not as fast as his teammate (Kyle Larson) but his car was good on the long runs. Jamie said, “It has a lot of drivability.”

Brad Keselowski: Brad is driving “Midnight”, the care made famous by Rusty Wallace. The car was fast in both practices and looks like the car Wallace drove to Victory Lane many times.

Joey Logano: The No. 22 was not happy after the first practice. They desperately need a win this week to avoid a must win situation at Richmond. They changed everything but the driver between practice sessions. Logano was only 21st after his first run.

Ryan Blaney: Ryan practiced getting on and off pit road. He was one of the first drivers on the track. In an interview he said, “Our car is really good. I think we are pretty close on our setup this week.”

Kyle Busch: Kyle was held 15 minutes to start practice for failing inspection at Bristol. He made a long run to start practice and he spun out but did not hit anything. He was not happy with his car. He said it was way too loose. The team put the qualifying trim in the car and Kyle went to the top of the speed chart.

Matt Kenseth: Matt was fast in the first practice (8th). He was one of the last cars on the track in final practice. Matt said NASCAR gave the teams a lot of track time but not enough tires for practice so there is no need to go out on old tires. He only worked on qualifying in final practice.

Denny Hamlin: Denny was 2nd fastest in the first practice. In the final practice he said, “I can run fast laps all day long at the top but I need a little help running the bottom of 3 and 4.”

Daniel Suarez: Daniel really liked his car in turns 3 and 4 but needs some help in turns 1 and 2. His goal this week is to keep it off the wall. Daniel switched to his qualifying trim early in practice. The team wants to get Daniel a good starting position.

Martin Truex Jr.: Martin was one of the first cars on the track in final practice. He went to the top of the speed chart.

Erik Jones: Erik was held 15 minutes to start practice for failing inspection at Bristol. Jones was fighting a tight racecar in practice. He was 19th fastest after 2 long runs.

Ryan Newman: After a long run the team asked Ryan what adjustments he needed. He replied, “I really cannot complain. It feels pretty good.” Ryan said Darlington is his favorite track in an NBC interview. After the team switched to qualifying trim Ryan said, “We are perfect in race trim, but it is too tight in qualifying trim.” I expect Ryan to run well in the race.

Austin Dillon: After his first run in the morning practice Austin said, “I am not sure it we just have a really good car this week or the track has more grip than it had before but the car is a lot easier to drive than what I expected.” His crew chief told him, “Our single lap times are a little down but we have a lot of long run speed.”

Paul Menard: Paul said the car was horrible after the 1st practice. He was 29th on the speed chart. The team changed the shocks and springs and Paul was 20th fastest after his first run in final practice.

Ty Dillon: Ty was fighting a tight racecar in the 1st practice. They made some adjustments and Ty said, “It is a lot better in 1 and 2 but need a little help in 3 and 4. Overall not bad.”

AJ Allmendinger: AJ made a short run and brought the car to the garage. He told the team, “Massive tight! We need to make a big swing at it.”

Chris Buescher: Chris was having problems in the center of the corners at both ends of the race track. The team made adjustments.

Trevor Bayne: Trevor battled a tight racecar in the first practice, but said it felt pretty good in the final practice. Trevor got into the wall at the end of practice.

Ricky Stenhouse Jr.: Ricky went out for an 8 lap run to in the first practice. He said, “It feels bad fast. How are the times?” His crew chief said, “You are P3.” They made adjustments between practices and Ricky said, “I do not know what happened but it is junk now. Ricky was 16th fastest at the time.

Aric Almirola: After his first run Aric said, “It is bad is turns 1 and 2 and horrible in turns 3 and 4.” Sounds like they have a lot of work to do to get the 43 car in the top 15 this week. They made some adjustments and Aric said, “It is still snappy loose.”

Landon Cassill: Landon said the car was too tight in final practice. The team told him to work the track bar.

David Ragan: David said the car was good in turns 3 and 4 but horrible in 1 and 2. The team made adjustments and David said, “Wow, whatever you did, give me some more of it. It is pretty close now.”

Michael McDowell: Michael was happy with his car but I do not know why. He was slow in the first practice and only 28th fastest in the final practice.

Most of the teams went to their qualifying setups at the end of practice. Daniel Suarez was the first to make a mock qualifying run. Here are the practice speeds in race trim for Final Practice…