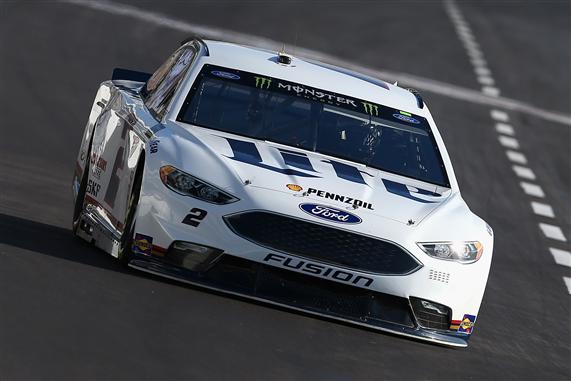 The Monster Energy NASCAR Cup Series cars practiced for the final time at Michigan Saturday. It is sure nice to be back to the regular schedule of one practice Friday, qualifying Friday and two practices Saturday. The MENCS will not qualify on race day again until the race at Martinsville.

NASCAR used the Tire Dragon to add rubber to the middle groove of the track.

*NASCAR told the teams this week that they will be taking cars from each manufacturer to the research and development department to make sure the cars are equal before the Playoffs begin. NASCAR did not say which race they will take the cars from, but the word in the garage is that the Toyota’s dialed it back this week because they do not want NASCAR to find out the advantage they had the last 6 weeks. If this is true, this makes the playing field a lot more even this week.

Ryan Blaney was fastest in Friday practice. They posted the fastest time on scuff tires in their qualifying setup.

Kyle Busch got into the wall in Friday practice.

Chase Elliott: Chase has finished all three of his races at Michigan in the 2nd place. He qualified 5th and said the car is pretty good. They were worried about the tires so they called a Goodyear tire representative to the garage. He told the team that three of the tires looked good but one was from a bad batch. They gave them a new tire and they are now good to go. Chase was 22nd on his first run, 16th on his second run and 15th on his last run. The team was heading in the right direction.

Jimmie Johnson: The No. 48 car served a 15-minute penalty for failing inspection last week. Jimmie hit the wall hard and will go to a backup car. Jimmie will start from the back Sunday which usually means he will win the race. He has done it the last two times he started back there. Jimmie did not get the backup car onto the track before practice ended.

Dale Earnhardt Jr.: Earnhardt was pretty happy with his car. The No. 88 team started practice by practicing his pit road speed. Earnhardt leads the series in speeding penalties this season. The car was 3rd fastest after his first run.

Kasey Kahne: Kasey went out for a long run and he said, “A little tight off center but not bad.” After another long run Kasey hit the wall pretty hard. They will go to a backup car and start at the back of the field. Kasey did run some laps in the backup car. He was 15th fastest in the backup car.

Kevin Harvick: The No. 4 car served a 15 minute penalty for failing inspection. Harvick was working on his long run speed. He usually runs a lot better in the race than he runs in practice. He was 12th fastest after his first run.

Clint Bowyer: Clint went out and made 4 laps. He brought the car in and said, “It just will not drive. The front is diving into the track on entry of every turn. We need to fix it.” The team made some changes and sent Clint back out. They told Clint, “Our long run speed is as good as anyone.”

Kurt Busch: Kurt went out for a 10-lap run to start practice. He liked his car. Kurt said, “Not bad. We need a little help on exit but I think we will be good.”

Danica Patrick: The No. 10 team was fighting a loose race car. They usually set the car up that way because that is how Danica likes it. But this car was too loose. She was 25th fastest after her first run.

Kyle Larson: Kyle was fastest in the morning practice and he was fast again in final practice.

Jamie McMurray: Jamie was working on his long run speed in practice. He made to long runs and said, “The car is not bad.” He was 10th fastest at the time.

Brad Keselowski: Brad has had the fastest car all weekend. He won the pole, was 2nd fastest in the morning practice and was fastest in final practice. The pole sitter has won 6 of the last 9 races at Michigan. After a long run the team asked Brad what he needed. He replied, “Just a windshield tear off.” That is a good sign.

Joey Logano: Joey really liked his car all weekend. After a 14 lap run Joey said, “This is one of the best cars we have had here.”

Ryan Blaney: The strategy for the No. 22 team is to “Be aggressive…B-E Aggressive!!” It is checkers or wreckers for Joey which makes him a good but risky pick this week.

Kyle Busch: Kyle got into the wall in Friday practice. It was just cosmetic damage. Busch went out early in practice and went straight to the top of the leaderboard. Busch practiced his pit road speed. He has the third most speeding penalties this season.

Matt Kenseth: The No. 20 team had the same strategy as the No. 19 team. They were working on their long run speed for the race. Kenseth was 10th fastest after his first long run.

Denny Hamlin: Christopher Bell is on standby to drive the No. 11 car if Denny has to go back to North Carolina. NASCAR told the teams “Do not practice on pit road until final practice” so what does Denny do? He practiced on pit road. As a result he was sent to the NASCAR hauler after the morning practice. NASCAR gave the team a warning not to do it again.

Daniel Suarez: The No. 19 team was working on their long run speed. They were not worried about where they were on the speed chart. They think there will be a lot of long green flag runs this week so they want a car that can slowly make their way to the front.

Martin Truex Jr.: Martin said, “It has good initial speed but it seems to fall off. We need more stability.” He was 9th fastest at the time. Martin made another short run and said, “We just need more speed. It does not feel that fast.” The team told him, “You are 2nd fastest on the speed chart.”

Erik Jones: The No. 77 car served a 15 minute penalty for failing inspection.

Ryan Newman: Ryan made a long run in final practice and he said, “The balance is just awful. It is too tight in 1 and 2 and too loose in 3 and 4.”

Austin Dillon: Austin made a long run to begin practice and he said, “Loose, loose, loose”. The team made some more changes and Austin said, “We are now in the ballpark.”

Paul Menard: Paul had a tight car in qualifying Friday and as a result he will start 30th. In practice today he said the car is 100% better. He was 23rd fastest at the time.

Ty Dillon: The No. 13 team completely missed the setup in qualifying Friday. Ty will start 33rd. In final practice Ty said, “We made huge gains. It is a little tight off but not bad.” The team used a similar setup as the No. 3 car for their race setup.

AJ Allmendinger: AJ fought a tight race car in qualifying and it continued to be tight in race trim. The team told him to work his track bar and AJ said, “That just makes it worse.”

Chris Buescher: Chris was complaining that the car needs more rear grip. He was 18th fastest at the time.

Trevor Bayne: Trevor was fighting a tight race car in practice. The team made a lot of short runs and brought Trevor in for adjustments. By the end of practice the car was a lot better. He was 18th fastest at the time.

Ricky Stenhouse Jr.: Ricky was fighting a loose race car in practice today. The team made many changes to try and tighten him up but he continued to complain the car was too tight. (Loose is fast, tight is slow). Ricky got into the wall in final practice. He said he just got loose and snapped out from him. They will work to fix the car. With 10 minutes left in practice Ricky said, “I am bringing it in. It is too loose and I will wreck it if I continue to run laps.”

Aric Almirola: Aric said the car starts off good but gets tighter and tighter into the run.

Landon Cassill: Cassill was happy with his car but he was not very fast. Cassill was only 31st fastest after he made 12 lap run.

David Ragan: Ragan was fighting a tight race car. They also did not have much speed. They were 28th fastest after a long run.

Michael McDowell: McDowell went out for a long run and the car was too loose. The team told him to adjust the track bar and he said it was down as far as it will go. The car needs more speed. Michael said there was a vibration in the car at the end of practice.

The MRN Announcers all agreed the Brad Keselowski looks like the best car but they agree Martin Truex Jr. will be a factor in the race. Their sleeper pick is Ryan Blaney.