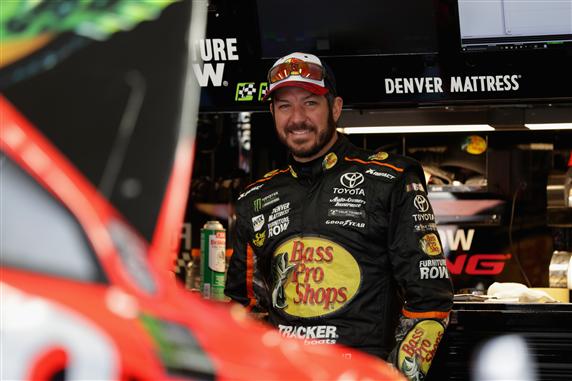 The Monster Energy NASCAR Cup Series cars practiced for the final time at New Hampshire Saturday. There was one practice held Friday and two practices on Saturday. Qualifying was held Friday evening and most of the cars in the Friday practice worked on their qualifying setup. The teams worked on their race setups in the two practices Saturday so we should have a good idea which drivers have the fast cars for Sunday.

NASCAR decided to add PJ1 Compound (Sticky stuff) to the 3rd and bottom groove of the track. The driver who was really happy about this was Kyle Larson. He told MRN radio, “I would have won the July race if the track had more grip.”

NASCAR announced that in order to speed up the inspection process they will not be using the template the measures the back right end of the car. It seemed like every team in the garage to working hard to manipulate this area of the car to gain an advantage Sunday.

Goodyear is running the same tire setup as they ran in July. The tire compound is unique for New Hampshire. Each team received four sets of tires for the three practices and qualifying.

**Joey Logano was not allowed to go onto the track in the final practice. NASCAR penalized the No. 22 team for not passing inspection Friday. This is the first time NASCAR has held a team out of an entire practice session.**

Chase Elliott: Chase crashed his primary car in the 1st practice Friday. The team will go to a backup car. The No. 24 team was already in a hole because of the penalties from Chicago. Now they have an ever more uphill battle. He was 11th fastest after his 1st and 2nd runs in practice.

Dale Earnhardt Jr.: Junior had problems with the car miss-firing early in practice. They brought the car in to look at it and found a plug wire was not connected. “When the car cuts to turn and cross the exit, when I put the throttle down, the left front is sliding,” Junior tells the team after his 2nd run.

Kasey Kahne: Kasey will have a new crew chief for the rest of the season. Darien Grubb will be making the calls for the no. 5 car. Grubb won 5 of the 10 playoff races with Tony Stewart in 2011. Kahne has looked fast all weekend. Kasey told the team, “It is really similar to the morning practice. IDK, it feels pretty good.” The word in the garage is that Kasey looks as happy as he has been in a long time. He could be a good sleeper pick Sunday.

Kevin Harvick: The No. 4 team once again brought a brand new car to the race this week. Crew Chief Rodney Childers was working on the long run speed. Kevin made a long run to start practice and then the team brought him in to work on his short run speed. They made adjustments and Kevin went to P1 on the speed chart.

Clint Bowyer: Just like the rest of the Stewart-Haas Racing cars, the No. 14 team worked on their long run speed. Clint was pretty happy with his car although he was not at the top of the speed chart.

Kurt Busch: The No. 41 team brought a brand new car to the track. It has a lot of speed. Kurt qualified 7th and had good long run speed in the car. Kurt said. “The splitter has hitting the track in 3 and 4.” The team made some changes and it seemed to have helped.

Danica Patrick: Danica followed Risky Stenhouse Jr. around the track, trying to lean something. She told her team, “It is not stubble entering the corner and it is ruining the enter run.” The team made adjustments.

Kyle Larson: The word in the garage is that Kyle Larson has the car to beat. He has been fast in every practice, qualified 2nd and he has one of the best cars on the long run. After a long run to begin practice his crew chief told him, “Man you have a rocket out there!”

Jamie McMurray: Jamie has been pretty consistent in practice. Most of his laps had top 12 speed. The No. 1 team has been “doing their own thing” the last couple of races. This week they went back to running a setup close to the No. 42 car. It seems to be working for them.

Brad Keselowski: Brad was a little off in the morning practice but the team made some major changes between the two practices. Keselowski shaked down the car to begin practice and he said, “It is a lot better then what we had.” Brad also told MRN after practice, “It looks like it will be the Kyle (Busch) and Kyle (Larson) show this weekend. Hopefully we can have something for them.”

Joey Logano: The No. 22 car was not allowed to practice. This is a huge penalty that will no doubt set the team back, but Team Penske has plenty of notes from New Hampshire to work with and they will lean on the info from the No. 2 and No. 21 cars today. This sucks for Logano. Joey ran between 12th and 15th fastest in the morning practice.

Ryan Blaney: Jamie McMurray said, “The 21 car has the best arch into the corner and he has a lot of speed” Blaney could be a great sleeper pick this week. He has had a lot of short run speed in all practices and in qualifying.

Kyle Busch: Kyle will be keeping the pit crew from the No. 19 team. They cost him the race last week but Kyle said, “Hopefully they got the gitters out last week and we can perform better this week.”

Matt Kenseth: Smooth and steady for the No. 20 team. This is their best track. Kenseth liked the way his car drove. In the morning practice he said, “It is a lot better than what we had in qualifying.” Matt made some long laps and did not say much about changes that needed to be made.

Denny Hamlin: Denny made a long run to begin practice. He said, “Close to where we were in July (Denny won that race). He said, “I can run the center as well as anyone. We just needs a little help at the bottom”

Daniel Suarez: Daniel was asked by MRN if he is going to be trying different setups for the JGR cars since he is not in the playoffs. He said, “We will work our own strategy and share the info with my teammates. Our team knows how to setup a car here so I think we will be fast Sunday” He was 4th fastest on his final run.

Martin Truex Jr.: Martin made a long run and said, “It feels really good and I do not think there is much falloff on our speeds.” The team told Martin, “You have the best car out there. Let’s work some more on our takeoff speed.” The team has the setup that Carl Edwards used at New Hampshire. This setup has allowed Truex to lead over 100 laps in the last two races at the track. Truex was fastest in Final Practice.

Erik Jones: After his first run Erik said, “It feels pretty stout. How are our times?” The team told him, “You are P2.” The team continued to work on the long run speed of the car.

Ryan Newman: Rolling the center is the most important thing at New Hampshire. The No. 31 car was having problems getting the car to roll through the center. They brought Newman in for adjustments. After his final run Newman said, “The longer I run the tighter I get.”

Austin Dillon: Austin made a long run and said, “We are a lot better than we were in July. It is a little too tight but it is drivable.” They seemed pretty happy with their car.

Paul Menard: Paul qualified well Friday which could hurt his value in fantasy NASCAR. Paul will start 19th. He told the team, “It is pretty good all around but I am getting beat on the exit of the corner.”

Ty Dillon: Ty went out and made a long run. He said, “We really made gains from the morning practice.” They made a long run and Ty jumped from 27th to 18th on the speed chart. Ty got into the wall at the end of practice. The No. 13 team will go to a backup car and start last Sunday.

AJ Allmendinger: AJ made a long run and said, “The important thing is that it rolls the center well. We just need a little help on the exit of the corners.” His car was better than it has been in the last month.

Chris Buescher: The team told Chris, “Go out there and log some laps. Try to work that 3rd groove and then move to the bottom. We will look at the data when you come in and make some changes.” Buescher said it ran well in the middle but he could not get the car “hooked up” at the bottom.

Trevor Bayne: Trevor was horrible in Friday’s practice and the morning practice Saturday. The team made some major adjustments and the car got a lot better. Trevor was 15th fastest after his second run.

Ricky Stenhouse Jr.: Ricky went out in practice and turned some laps and Danica was following him the entire way. The two talked after the run about their cars. (Both are Fords but interesting that SHR is working with RFR in the playoffs). Ricky said the car is “lacking both speed and balance.” Ricky made another long run and he said, “It is just no good. I do not know what to do.”

Aric Almirola: Aric made a long run and said, “The rear is into the track a lot better than it was but it is still a tick to tight.” On his final run Aric said, “I think we hit on something. It is like a different car now.”

Landon Cassill: Landon was happy with the changes the team made between practices. The car was a little tight. They continued to work on it and Landon that it is getting better.

David Ragan: David thought the car needed more work after his first run. “The changes didn’t really help. It is still too tight.”

Michael McDowell: “The tires just do not have any grip. It feels like the car is not into the track,” Michael told the team after his first run. The brought the No. 95 car in for some adjustments. He made another long run and said, “Too tight. Just too tight.” The good news is that this team usually runs better in the race then they do in practice.