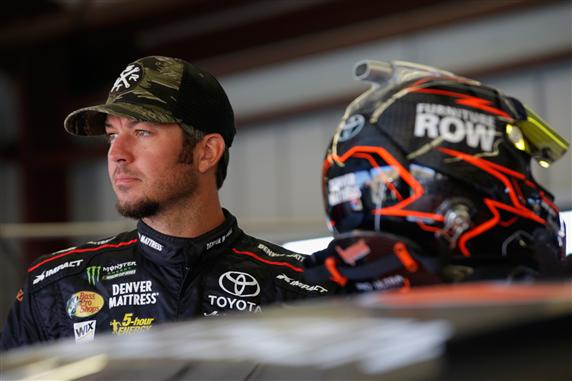 The Monster Energy NASCAR Cup Series cars practiced for the final time at New Hampshire Saturday. The series back to its normal schedule this week. There was one practice Friday, qualifying Friday evening and two practices Saturday morning.

The weather was partly cloudy and 65 degrees at practice today. Race temperature for Sunday is forecasted to be sunny and 85 degrees. So the track will be hotter and slicker than it was today.

NASCAR decided to use the Tire Dragon and add VHT (Grip Strip) to the bottom two lanes of the track to help improve the racing this week. If it works, track position will be not as critical as it usually is at the Magic Mile but I would still consider the drivers starting in the top 15 as the favorites to run up front Sunday.

Teams were given 4 sets of tires for the three practice sessions and qualifying. Most teams used the same set in Friday’s practice as they used in the morning practice. That means they had two sets for the final practice. All Stewart-Haas Racing drivers and Joey Logano used this strategy in the Morning practice.

Chase Elliott: Chase is not known for being good at the Magic Mile but that could change this week. He has had top 5 speed all weekend. He made a 7 lap run to start practice and he was 4th fastest. Chase was on a long run late in practice and his team told him, “Run the same line as what you did on the last one. You really shot to the top with that line.” Chase is my pivot driver in DraftKings this week.

Jimmie Johnson: The popular picks will be Kyle Larson, Martin Truex Jr. and Kyle Busch. Do not sleep on the No. 48 car this week. He had top 5 speed in the Morning practice and ran the most laps. That is usually a sign they like their car.

Dale Earnhardt Jr.: The No. 88 team changed the rear axle and springs in the Morning practice. Junior thought if the back of the car was hooked up they could really gain some speed. After sitting in timeout to start practice, Junior made a short run and went to 9th fastest.

Kasey Kahne: Kasey said, “The new tires really make it go fast but when they wear out I get too tight.” He was 12th fastest at the time.

Kevin Harvick: The No. 4 car was on old tires in the Morning practice. They wanted to save two sets of tires for final practice. Kevin said. “We are just a touch off somewhere. I am trying to move around to find where it works well but the lane I used before does not work this week.” He was 9th fastest at the time.

Kurt Busch: The No. 42 car was on old tires in the Morning practice. They started off slow but made a shock adjustment and Kurt said, “When we put new tires on it the car shacks and ruins the balance of the car. It takes 15-20 laps for the car to come in.” At the end of practice Kurt said, “It is good but not where we need to be to win the race. We have more work to do over night.”

Danica Patrick: Danica was on old tires in the Morning practice and she was fighting a tight car. She started the Final Practice with a 14 lap run. She was 15th fastest on the time sheet. She said, “We are making gains on it.”

Kyle Larson: Once again Kyle will start last. Last week he passed 91 cars on his way to the front. The No. 42 team will be without crew chief Chad Johnston but they still look fast this week. After being released from his 30 minute penalty Larson went to 4th fastest on the speed chart. Kyle said, “The car is no good this week. It really looses grip as the VHT goes away.” Kyle was 4th fastest. I am sure there are 36 teams who would switch cars with him.

Jamie McMurray: Jamie made some long runs to get some information for the No. 1 and No. 42 cars since Larson was in a 30 minute timeout. McMurray said, “The car works a lot better when the VHT was at the bottom of the track but now that it wore off we are junk.” Jamie was 15th fastest at the time.

Brad Keselowski: The No. 2 car was working on their long run speed. Brad made a 17 lap run and brought it in to have the tires checked. He also worked on his pit road speed and getting in and out of his pits.

Joey Logano: Joey said the car is a little better in Final Practice than it was in the Morning Practice. He was 14th fastest after his first run. When the sun came out Joey said it helped the car. It is supposed to be sunny and hot tomorrow.

Ryan Blaney: Ryan was working on long runs in practice. He made two 10-lap runs and brought the car in for adjustments. The No. 21 car was 8th fastest.

Kyle Busch: Kyle was the 1st driver to run the bottom of the track in the morning practice. The other drivers noticed how fast he was running so others migrated to the bottom but did not have the speed of the No. 18 car. Kyle made a 5 lap run and then came in for an adjustment. The changes sent the No. 18 car to the top of the speed chart.

Matt Kenseth: Matt has been very competitive this week. He has been posting laps in the top 6 all weekend long. He has been the best driver at this track the last two seasons. He was 3rd fastest early in practice. Matt ran the most laps because the team felt they did not need to make any adjustments to the car.

Denny Hamlin: Denny wrecked his car in practice yesterday. He will be in a backup car but will not have to start from the back since he qualified the car he will race Sunday. Hamlin was one of the first on the track and posted the fastest speed. He said the car would be perfect if they found more rear grip. No one ran the bottom as well as the No. 11 car in practice.

Daniel Suarez: The Toyotas really have the speed this week (not including Kyle Larson). Suarez was 3rd fastest early in practice, joining his 3 Joe Gibbs Racing teammates at the top of the speed chart. Daniel practiced his pit road speed and getting in and out of his pit stall. The team does not want any penalties Sunday.

Martin Truex Jr.: Martin asked his team, “Should I try running the bottom?” He team told him, “No. You are the best in the center and they cannot catch you there. Let’s keep doing what we are doing.” Martin made a 17 lap run and the team asked him, “What do you need bud?” Truex replied, “I don’t know. It feels pretty good.” Truex was 2nd fastest at the time.

Erik Jones: Once again the No. 77 car has the same setup as the No. 78 car. The team has been doing this for the last month and it has really helped Jones finish in the top 10. Jones was 10th fastest after 2 long runs. He also practices his pit road speed and getting in and out of his pit stall.

Ryan Newman: Ryan started practice with a 10-lap run and he said, “We are much better than the morning practice. I still need a little help on exit.” The No. 31 car was 11th fastest at the time.

Austin Dillon: Austin started practice with an 11 lap run. He was 15th fastest. He said the car was still too tight. The team told Austin to try running higher on the track.

Paul Menard: Paul made a 12 lap run to start practice and he was 19th fastest. He starts 29th so that is a big improvement since qualifying.

Ty Dillon: The No. 13 team changed shocks between practice sessions. They were not happy with their car.

AJ Allmendinger: AJ is a good sleeper pick this week. His practice times have been faster than his 23rd qualifying time. He is good at managing his brakes. He was having problems getting the car to rotate through the center of the corners.

Chris Buescher: Chris made a 15 lap run to start practice. They brought him in for changes and Chris said, “Each time we make changes it gets better. Keep going in that direction.”

Trevor Bayne: Trevor started practice with a 12 lap run and he was 14th fastest. The No. 6 car is a good candidate to score position differential points this week. He starts 27th.

Ricky Stenhouse Jr.: Stenhouse has been good but not great. He ran in the top 20 in all of the practices. The team was working on the front end turning into the corner. It may be hard for him to pass cars if the front end will not turn.

Aric Almirola: After an early run in practice Aric said, “It is pretty good everywhere but the center. I need to roll through the center better and that should help our exit.” They made some adjustments and Aric said, “Much better.”

David Ragan: David said, “That change really helped the front end. That was a good change. Give me some more of that.” He was 27th fastest at the time.

Michael McDowell: Michael has been fighting a tight racecar all weekend. This is historically the worst track for McDowell.

Matt Dibenedetto: He has been complaining in both practices that the car is bouncing on the front splitter and making it very difficult to drive. I would not touch him in fantasy this week.