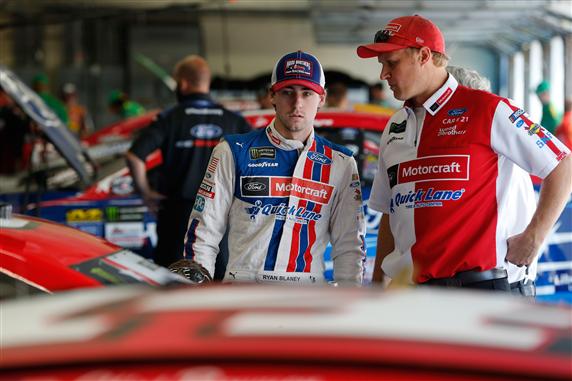 The Monster Energy NASCAR Cup Series cars practiced for the final time at Pocono Raceway Saturday. Starting position does not matter as much at Pocono as it does at other tracks. Teams worked on trying to get their cars perfect through all three turns to make their way to the front Sunday.

The weather was perfect today for practice. It was mostly sunny and 75 degrees. The weather for the race Sunday is scheduled to be sunny and 85 degrees. The track will be hotter and slicker than it was today. Practice speeds from this practice should still translate into race speed tomorrow.

Teams were given four sets of tires for the two practices and qualifying. Most teams used one set of tires in Friday’s practice, one set for qualifying so they had two sets for this practice. The common strategy was to make one long run with one set of tires and then put fresh tires on the car at the end of practice.

Dale Earnhardt Jr. blew an engine in Friday’s practice. He will start from the back Sunday but be scored from his 28th qualifying position in DraftKings, Fox Fantasy Auto Racing and Fantasy Live.

Four drivers were penalized 15 minutes for final practice. Erik Jones and Derrike Cope were late to inspection and Kurt Busch and Daniel Suarez because their cars failed inspection. The practice was only 55 minutes so these teams lost a lot of track time.

Chase Elliott: Chase stayed in the garage for about 10 minutes after practice began. The team was still making adjustments on the car. Chase liked the adjustments after his first run. He was 5th fastest. Chase one of the only cars to make his fast lap late in practice.

Jimmie Johnson: The No. 48 team focused on qualifying yesterday and when they switched over to their race setup today, they were not happy. Jimmie said, “It is bumpy, loose and has no speed.” Chad Knaus asked, “Anything you like about the car?” Jimmie replied, “Not really.” They brought him in for adjustments. Jimmie went back out for a long run and reported the car was much better. He was 8th fastest.

Kasey Kahne: Kasey had a tight car. He said, “It is really hard to get back to the throttle out of the center of the corner. I need more speed!” The team made a shock adjustment and send Kasey back out. He said, “A lot better in and out of the corners.” Kasey went to 6th fastest on the speed chart.

Kevin Harvick: Kevin really liked his car. He said the balance is really good but complained about the wind. He said, “The wind really sends us down the back but hurts us on the front.” Kevin was 3rd fastest at the time. Harvick worked on pit road speed at the end of practice. Harvick was the only car to make 15 consecutive laps in practice. That usually means he likes his car.

Clint Bowyer: Clint liked his car a lot more than he did yesterday. He was 11th fastest after his long run. Clint worked on his pit road speed in practice.

Kurt Busch: Served a 15 minute penalty to start practice. The team said they are not worried about the penalty because they are really happy with the car. Kurt worked on long runs and saving fuel.

Danica Patrick: “loose, loose, loose” Danica said after her long run. She told the team she could barely hold onto it.

Kyle Larson: Kyle said the car was a little loose entering all three corners, but usually he likes the car like that. He was 2nd-fastest at the time. Larson went out for a long run and spun out. He may have got into the oil from Joey Logano’s car.

Jamie McMurray: Jamie made a long run and said, “I’m really concerned about the brakes. The pedal is not as tight as it should be. Do we have big enough brakes in the car?” He has never finished in the top 5 at Pocono.

Brad Keselowski: Brad liked his car. He made a couple of long runs, worked on saving fuel and worked on getting on and off of pit road. Brad told MRN, “It is all about rhythm and timing. If I hit my shifts and get into the brakes at the right time we should be really good. The car has the speed this week.”

Joey Logano: Joey made a 6 lap run to begin practice and he brought the car in the garage because there was oil on his windshield. Joey thinks the oil was coming from his car. The team found out it was only power steering fluid. The team sent Joey back out for a long run.

Ryan Blaney: Ryan liked his car. He made a long run and then worked on his pit road speed. The team had problems in the pits two weeks in a row.

Kyle Busch: Kyle working on getting his crew chief familiar with what he wants in the car. Kyle made some long runs. The No. 18 car immediately went to the top of the speed chart to begin practice. Kyle got loose at the end of practice and scraped the wall.

Matt Kenseth: Matt said the balance was really good in turns 1 and 2 but needs a little speed out of turn 3. He was 3rd fastest at the time.

Denny Hamlin: Denny said, “It is really hard to have confidence going into the corner because the car is so inconsistent.” The No. 11 team went to talk to the No. 20 team about their set up.

Daniel Suarez: Served a 15 minute penalty to start practice. Daniel worked on long run speed in practice. He thinks he learned something in the Xfinity Series car that he can use on Sunday.

Martin Truex Jr.: Martin went out to shake down the car. They had a lot of problems in Friday’s practice so they wanted to ensure everything was good to go. Martin was 2nd fastest after his first run.

Erik Jones: Served a 15 minute penalty to start practice. Erik told the team after his long run, “My biggest issue is figuring out where to shift and when to brake. I think the car is good.”

Ryan Newman: Ryan said, “It is pretty solid all around.” The team liked the car and decided to keep Ryan out for a long run. At the end of practice Ryan said, “The car races pretty good but I’m afraid the brakes are junk.”

Ty Dillon: Ty said, “Definitely too tight in turn 1 but too tight all around.” They brought the No. 13 car in for adjustments. Ty went back out and he said, “Much better, much better.” After a final long run Ty told the team, “I am happy with it if you are.”

AJ Allmendinger: After his first run AJ said, “We definitely made gains from yesterday.” He was 11th fastest at the time. He needed to get back to the throttle a little sooner out of the turns.

Chris Buescher: The No. 37 car was too tight. They brought the defending race winner into the garage for repairs. Chris went back out and said, “It is manageable.”

Trevor Bayne: The No. 6 car was too loose all around.

Ricky Stenhouse Jr.: Ricky said the car is way too loose especially in turn 3. They brought him in to make adjustments.

Darrell Wallace Jr.: “Bubba” will be driving the No. 43 car this week for Richard Petty Motorsports. They sent Darrell out to make a long run and get used to the car. Darrell almost spun out getting onto pit road. Darrell went out and followed Kyle Busch around the track for 10 laps.

Landon Cassill: Front Row Motorsports said both of their cars (David Ragan the other) will work on long run speed in Final Practice. Landon liked his car better than where they qualified.

David Ragan: David went out to shake down the car and then brought it in for adjustments. David said, “It is a lot better than yesterday. We are headed in the right direction.”

Michael McDowell: Michael said the car was a little loose but not bad. They stopped to get a tire check and then brought the No. 95 car in for slight adjustments. Michael said at the end of practice; “We are ready for tomorrow!”

Here are the speeds for the final practice session: Pocono Practice Speeds