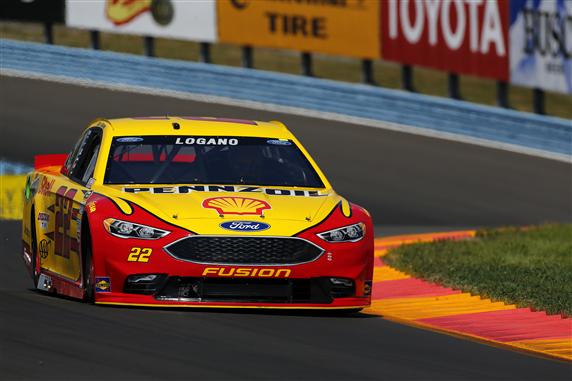 The Monster Energy NASCAR Cup Series cars practiced for the final time at Watkins Glen Saturday. The series had two practices Saturday and then the series will qualify Sunday before the race. This is the second week in a row NASCAR has used this condensed schedule. It really did not affect the race last week and I do not expect the schedule to have an impact on the race Sunday.

It is hard to get a read on the cars in practice at the road courses. The track is so big that it is impossible to dial the car in on all 7 turns. I will do my best to get as much information as possible, but there will not be as much inside information as we see on the oval tracks.

The road course tracks are not as heat sensitive as the oval tracks. I do not expect the weather to have an impact on the track this week.

Regan Smith is on standby this weekend for Denny Hamlin. Hamlin’s could leave the track at any time if his wife goes into labor (this makes him a risky pick, but I am not too worried about it. Smith did not practice the car this week so if he climbs into the No. 11 car he will have no experience in the car.

Many of the MENCS drivers competed in the Xfinity Series race Saturday. The race at Watkins Glen is all about rhythm. There were a lot of drivers in the Xfinity Series race so they could get extra practice, especially coming into the pits on the opposite side of the track which they are used to. These drivers should have an advantage this week. Some of the drivers who will be competing in both races this week include: Kyle Busch, Joey Logano, Brad Keselowski, Kevin Harvick, Kyle Larson, Erik Jones, Paul Menard and Ty Dillon.

There were no penalties for the morning practice.

Kyle Busch was fastest in the morning practice. He was followed by Martin Truex Jr., Denny Hamlin, Jamie McMurray and Erik Jones.

Corey LaJoie got a flat tire and spun out. He brought out the red flag.

Jimmie Johnson and Dale Earnhardt Jr. both spun out. No damage to the cars. Both drivers said they had problems with their brakes. This could be a problem for the Hendrick Motorsports cars this week.

Gary Klutt spun out and brought out the third red flag in the morning practice. He did not have much damage to his car. The No. 15 car did put a lot of debris on the track and that was the reason for the red flag.

Danica Patrick spun out in carousel and brought out the yellow flag.

Kurt Busch spun out in the morning practice and got some damage to the front of the car.

Chase Elliott: Chase may have the only Hendrick Motorsports car worth using this week. His teammates all had problems with their cars but Chase said his car was, “A little free on exit but overall not bad.” He was 6th-fastest in race trim. With 20 minutes left in practice crew chief Allen Gustafson said, “I think we nailed race setup. Bring it in and let’s work on the Q-setup.”

Jimmie Johnson: Jimmie spun in the 1st practice but there was only minor damage to the car. Jimmie hated his car. He was 25th fastest in race trim.

Dale Earnhardt Jr.: Junior spun out in the morning practice. He did not hit anything. Junior said the car was, “snappy loose.”

Kasey Kahne: Kahne fought a tight racecar in the morning practice. I heard they completely changed their entire setup between the practices. Kasey was in race trim in Final Practice. He complained that the car was way too loose.

Kevin Harvick: The No. 4 team spent the morning practice in race trim and worked primarily in race trim in the Final Practice. Kevin is really focusing on getting his car dialed in for the race Sunday. They switched over to their qualifying setup at the end of practice. Kevin said, “It has good speed and I feel it has pass ability (I am guessing this is the ability to pass other cars)”. Harvick won the last raod course race.

Clint Bowyer: Clint really needs a win to secure his place in the Playoffs. The team worked primarily on their race setup in practice. He was the 6th fastest in race trim. At the end of practice the crew chief of the No. 14 car (I cannot spell his name) said, “We have the most consistent speed on the track.” His spotter told Clint, “You are sneaky fast.”

Kurt Busch: Kurt spun his car in the morning practice. He did hit the wall. The team worked on the setup between practices and Busch said, “It is much better now.” They were in race trim at the time.

Danica Patrick: Danica spun out in the morning practice. She said she just over-drove the corner in the carousel.

Kyle Larson: Kyle only got 20 minutes of practice because he was penalized 30 minutes for spinning his tires after the race last week. Larson only made 7 laps in final practice but he was 6th fastest. The no. 42 car is a good pivot from the top cars this week.

Jamie McMurray: Jamie made a long run and said, “I cannot drive into turn 1 without locking up the brakes.” It is hard to drive with flat spots on the tires. Jamie said after practice, “The Joe Gibbs Racing cars are the cars to beat but we are pretty close.”

Brad Keselowski: Team Penske is running a larger brake package this week because of the softer tire and higher speeds at the track. Brad was very fast in final practice. Brad said, “I think we have something for them this week.” Paul Wolfe asked Brad, “Should we try what we talked about this morning/” Brad replied, “No… we have them covered with this setup.”

Joey Logano: Crew chief Todd Gordon said on SiriusXM NASCAR Radio that the No. 22 team has been working on the Watkins Glen car for a month. Joey has also been working extra hard in the Ford Racing Simulator and he will compete in the Xfinity Series Race. It sounds like the No. 22 team is putting a lot of effort into winning this race.

Ryan Blaney: Ryan went out on the track right behind Joey Logano. The team told Ryan to do his best to follow the No. 22 car. Ryan and Joey debriefed between practices to talk about their cars.

Kyle Busch: Kyle has been on fire the last month and he shows no signs of slowing down. He was the fastest in the morning practice. The team worked on their race trim in the first practice because they had to sit out 30 minutes in Final Practice. The No. 18 car was in qualifying trim in Final Practice. After serving his penalty Kyle made a qualifying lap and said, “I really screwed that up. I almost spun out in turn 6.” He was 5th fastest on that lap.

Matt Kenseth: Matt is my ultimate sleeper picks this week. Most people do not think he is very good at road course racing, but he has 3 straight top 10 finishes at Watkins Glen. The Toyotas are very fast this week.

Denny Hamlin: Denny worked on race trim in the morning practice. He was 3rd fastest. In the Final Practice the No. 11 car was in qualifying trim.

Daniel Suarez: Daniel worked a lot this week in the Toyota Racing Simulator to get him more practice on the road courses. I would like Suarez more if he was racing in the Xfinity Series race Saturday.

Martin Truex Jr.: The No. 78 team brought the same car they raced at Sonoma. The car qualified 3rd and led 25 laps before the engine expired. The team thinks this chassis is very fast. The team made a shock change between practices. Martin was 3rd-fastest in race trim.

Erik Jones: The No. 77 team started practice with the same setup as the No. 78 car (Martin Truex Jr.). The team said that Jones spent a lot of time in the Toyota Racing Simulator this week with Kyle Busch.

Ryan Newman: Ryan was fighting a loose racecar all day. He said, “I have to ease into the throttle out of the exits because it feels like it wants to spin out if I mash the gas.”

Austin Dillon: Austin was fighting a tight race car in practice. This is his worst track. The no. 3 car was 28th fastest.

Paul Menard: After a four lap run Menard said, “Balance is pretty good. We need a little help on the exit of the corners.”

Ty Dillon: Ty liked his car today. He said, “Felt pretty good out there. It stays into the track and the wheel-hop is controllable.” The team was working on the rotation of the car in turn 6 (the carousel).

AJ Allmendinger: AJ was not happy with the car in the morning practice. He said the car was bouncing all around the track. The No. 47 team made shock adjustments between practices. AJ said, “It has a lot more stability.” He was 5th fastest in race trim. Half-way through practice AJ said, “I nicked the wall. It should be OK but it is still too loose.” AJ said the car was not bad in race trim but it is “evil” in qualifying trim.

Chris Buescher: Chris really leaned on his teammate AJ Allmendinger this week. He said, “It is stable everywhere except through the S’s. It is really slick there.” Buescher was 19th-fastest at the time.

Trevor Bayne: The No. 6 team had problems with the brakes in the morning practice. They made adjustments between practices and sent Trevor out for a long run. He said, “The changes are going in the right direction.” He was 17th-fastest at the time.

Ricky Stenhouse Jr.: The No. 17 team started final practice in qualifying trim. Most teams believe starting position will be very important this week.

Aric Almirola: Aric was fighting a loose race car today. He said, “The backend is really hard to control. I feel as though we will get beat a lot in the carousel.”

Landon Cassill: Landon said in the Garage Cam feature on nascar.com that his goal this week is, “Not to be last.”

David Ragan: David is a good cheap option in salary cap games this week. He has the 14th-best driver ranking at Watkins Glen. The team was fighting a tight racecar today.

Michael McDowell: Michael made some long runs in practice and said, “It is loose on the left-hand turns and needs more right grip.” After a long run in Final Practice Michael said, “The stability is really, really good. I think it will pass well.” The No. 95 car was 9th-fastest in Final Practice.

Matt Dibenedetto: The team was having problems with their power steering. When Matt turned the wheel the tires turned a lot more than he anticipated. The team changed the steering box.

Boris Said: Crashed in final practice and tore up the front splitter on the car. Boris announced this will be his last race in the MENCS. Boris said the backup car is not built for the road courses. The team will go to a backup car for Sunday.

Cars that looked good in practice: Brad Keselowski, Kyle Busch, Martin Truex Jr., Kevin Harvick, Joey Logano, Clint Bowyer, Kurt Busch and Denny Hamlin (* I recommend trying to get as many of these drivers in your lineup as possible.)