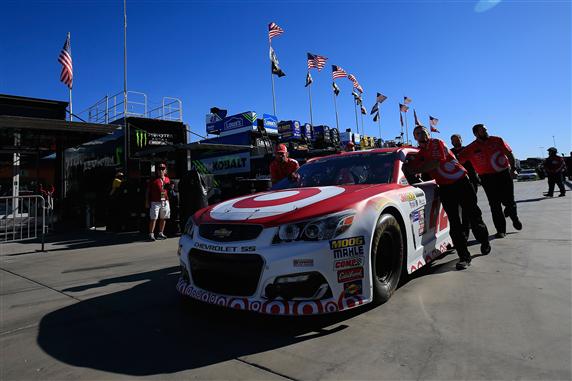 The Monster Energy NASCAR Cup Series cars practiced for the first time at New Hampshire Friday. The series back to its normal schedule this week. There was one practice Friday, qualifying Friday evening and two practices Saturday morning.

The weather was partly cloudy and 65 degrees at practice today. Race temperature for Sunday is forecasted to be sunny and 85 degrees. So the track will be hotter and slicker than it was today.

There were 10 drivers that participated in the two day practice session at New Hampshire at the end of May. Here are the drivers with the fastest speeds on the final day: 1. Kyle Larson, 2. Kasey Kahne, 3. Kyle Busch, 4. Brad Keselowski, 5. Ryan Blaney, 6. Clint Bowyer, 7. Ryan Newman, 8. Ty Dillon, 9. Trevor Bayne, 10. David Ragan

NASCAR decided to use the Tire Dragon and add VHT (Grip Strip) to the bottom two lanes of the track to help improve the racing this week. If it works, track position will be not as critical as it usually is at the Magic Mile but I would still consider the drivers starting in the top 15 as the favorites to run up front Sunday.

Teams have four sets of tires for the three practice sessions and qualifying this weekend. Most teams only used one set for Fridays practice and will try to save two sets for final practice Saturday.

Chase Elliott: Chase made a 15 lap run to start practice. He reported, “It’s just way too tight. I have to manhandle it to get it to turn. We are way off.” The team brought the No. 24 car in to put the same setup as the No. 5 car. Elliott made a qualifying run and said, “It is a lot better.”

Jimmie Johnson: Jimmie started practice running the top and then slowly worked his way to the bottom. Jimmie did not want to get into the grip strip (VHT /PJ1) too early in practice. He was 4th fastest at the time. Jimmie asked Chad Knaus if he could see video of where Larson was running.

Dale Earnhardt Jr.: Junior made a 10 lap run and said, “I just do not have a feel for it. It is just really hard to drive.” Dale said they just need to keep working and gambling in the pits because they do not have the speed to run with the top cars. The No. 88 team will gamble the rest of the season to win a race.

Kevin Harvick: Kevin went out and made an 8 lap run. Harvick said in his best Northeastern accent, “Tha cahr is wicked fast!” He was 2nd on the speed chart at the time.

Clint Bowyer: Clint really liked his car. He said, “It rotates good and goes where I want to. Let’s make a long run and see how she reacts.” He was 3rd fastest at the time.

Kurt Busch: Kurt started practice with a 7 lap run. He reported the car was too loose. He was 12th fastest at the time. The team put their qualifying setup in the car and Busch went to 9th fastest on the speed chart.

Danica Patrick: Went out and made a 14 lap run. Danica said, “It’s just so loose, it’s finicky as (expletive) up there.”

Kyle Larson: This was the first practice session since the No. 42 team was fined for illegal downforce on the backend of the car last week. The team is without their crew chief, Chad Johnston. Larson brushed the wall early in practice. The team brought Larson in for adjustments. On his second run, Larson was #1 on the speed chart. Larson was almost 1 second faster than the track record.

Jamie McMurray: Jamie had the same setup as Larson. The No. 1 car was 3rd fastest after their 10 lap run.

Brad Keselowski: Brad only has one lobster in his trophy case (He won in 2014) but he has 11 consecutive top 15 finishes at the Magic Mile.

Joey Logano: Joey said before practice, “This is by far my favorite track. It is the only place we go where I do not get any booos. Everyone likes me here.” Logano made an 8 lap run and was fastest on the leaderboard.

Ryan Blaney: Ryan went out and made a 5 lap run. He was 2nd fastest at the time. Ryan said, “It looks what we learned in practice is working. We just need to loosen it up a bit.”

Kyle Busch: Kyle made a 3 lap run to begin practice. The crew chief told Kyle, “We are good. Bring it in and let’s put the qualifying setup in it.” Kyle was #1 on the leaderboard after his first qualifying run. Kyle also asking for video of what line Larson ran on his fastest lap.

Matt Kenseth: New Hampshire is the best track for Kenseth. The No. 20 car worked on qualifying setup. Matt said, “Starting in the top 5 is the key to winning this week. Track position is very important here.” Matt was 4th fastest after two qualifying runs.

Denny Hamlin: Denny’s 102.7 driver rating is not only a good radio station, it is also the best driver rating in the series at New Hampshire. 30 minutes into practice and Hamlin made a 30 lap run. He was fastest on the speed chart. Hamlin was the first driver to race at the bottom of the track near the yellow line. Hamlin made a qualifying run and hit the wall hard. The team will go to a backup car. Hamlin will not have to start in the back as long as he starts the race in the car he qualifies in.

Daniel Suarez: Daniel not only has 2 Xfinity Series races at New Hampshire, he also has 5 races in the K&N Pro East Series at the track. Daniel made a long run (19 laps) to start practice. He said the car was too tight. They brought him in to free up the No. 19 car.

Martin Truex Jr.: The No. 78 car worked primarily in qualifying trim. Truex was 2nd fast after his qualifying run. He asked on the radio, “How are we?” His team answered, “No. 2. The 18 car is fastest.” Truex replied, “We cannot start 2nd to him again this week. Find some more speed.”

Erik Jones: Only has one start at the track and it came in the Xfinity Series. This will be the first race since it was announced he will drive the No. 20 car next year. Maybe it releases some pressure from him.

Ryan Newman: Ryan tested at New Hampshire in May and he will be running the Modified race this weekend. He will have a lot of track time at the Magic Mile this week. Newman made a 10 lap run and said the car was good on entry and exit of the corners but needed some help in the center. Newman was 8th on the speed chart in race trim.

Austin Dillon: Dillon went out for a 5 lap run and he said, “Too loose on exit. I cannot get back to the throttle.”

Paul Menard: The No. 27 car was too tight. Paul was 23rd fastest after his first run. The team made some changes and Paul said, “We went the wrong way with those changes.”

Ty Dillon: Crew Chief Bootie Barker said the No. 13 team learned a lot in the May test at New Hampshire. They are starting practice with the setup they learned in the test session. Ty said the entry and exit of the corners were good but needed some help on the center. Dillon sat on pit road waiting for the No. 42 car so he could follow him around the track and try to learn the preferred line.

AJ Allmendinger: AJ went out and made a 14 lap run. He said, “Better on this run than the last run but we need some help on the center of 1 and 2.” AJ got into the wall at the end of practice but the damage was not bad.

Chris Buescher: The No. 37 team needs to turn better in all corners. Chris said the car is too tight. He was 29th fastest after a 20 lap run. The team made a shock adjustment and Chris climbed to #19 on the speed chart.

Trevor Bayne: Trevor was not happy with his car. He said, “I have absolutely no grip.” He was 30th fastest at the time.

Ricky Stenhouse Jr.: Ricky waited 15 minutes before he climbed into the car. He was ontop the pit box watching the lines the other drivers were running.

Aric Almirola: Aric will be back in the No. 43 car this week. He had to have a new seat put in the car to help him sit upright in the car. Aric said it will take some getting used to because he is used to sitting lower in the car. He told the tv crew, “I am just so happy to be back in the car. It feels really good but we will see how I feel after 30 laps. I am pretty happy with the car but need some speed in the center of the turn.”

Landon Cassill: Landon made a 14 lap run to begin practice. He said the car was too tight out of the corners. The team then switched to qualifying trim. He was 29th fastest at the time.

David Ragan: David made a 3 lap run to start practice. He said the car was to free on exit. They brought the No. 38 car in to tighten it up. After some changes to the car David said, “We are pretty close to where we need to be.”

Michael McDowell: Michael said, “We missed the package this week. I cannot drive it. Let’s change everything.”

Click here for the 1st Practice Times at New Hampshire