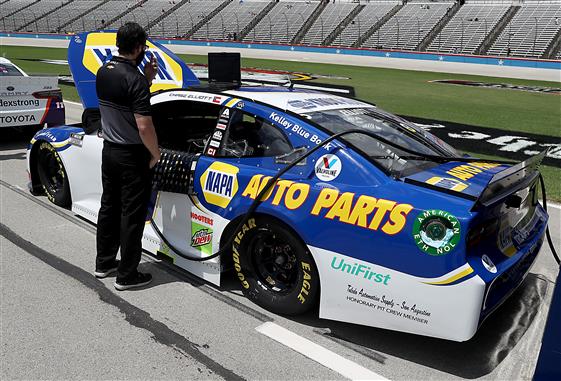 The NASCAR Cup Series will compete on a 1.5-mile track for the third consecutive week. There have been seven races on tracks similar to Kansas, so we should have plenty of date to help us select out One & Done driver this week. The Super Start Batteries 400 can be seen Thursday at 7:30 p.m. ET on NBCSN.

Last Race: Really Jimmie Johnson!!? The No. 48 team could not get out of their own way Sunday at Texas Motor Speedway. Johnson started 20th and raced his way to the 10th position and then Johnson received a penalty for too many men over the wall. Johnson restarted last and raced his way back to the 11th position when he was involved in a wreck. The damage was not too bad but the team had too many men over the wall again and that resulted in a two lap penalty. How does this happen to an organization with 600 employees working on four cars? Hopefully we have better luck Thursday night.

Here are my picks for the Super Start Batteries 400 …

My One & Done Pick for Kansas: Kurt Busch

Track position has been important in races with the 550 HP aero package this season. I want to use Kurt Busch as my One & Done pick while he is guaranteed a top-12 starting position. Busch has been consistent on the 1.5-mile tracks this season and he has consistently finished in the top 10 at Kansas. Busch has an 8th place average finishing position in the last six races on intermediate tracks. He also has an 8th place average finishing position in his last five races at Kansas. The No. 1 car should finish in the top 10 Thursday.

Chase Elliott has not been as fast as he was in the races at the beginning of the season but I think the No. 9 car will have a good chance to win the race Thursday. Elliott won at Kansas in 2018 and he finished second last year. Elliott wasn’t running as well in those seasons as he is in 2020. Elliott has only had one finish outside the top-four at Kansas in his last five races at the track. Elliott should be a safe pick this week.