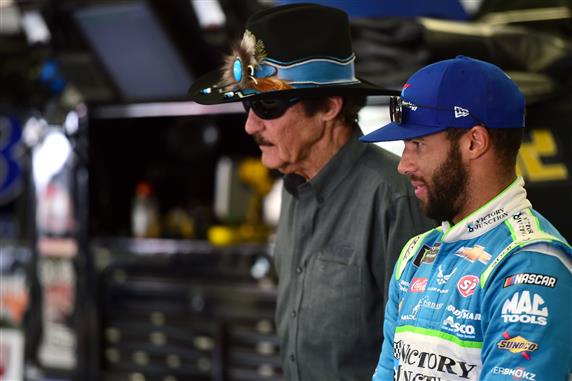 The Cup Series will travel to the North East this week to compete at New Hampshire Motor Speedway. The cars will have the 750 HP aero package with the small spoiler and small splitter. It is nearly the same package they ran in 2018 at the Magic Mile and the same as what they had at Phoenix in March. While this information is important, it is a good idea to look at the data from the 2019 race at New Hampshire too. Here are my race notes from the Quaker State 400 at the Magic Mile in 2019….

– The Track: The excitement at New Hampshire started in practice. Most of the field was on the track and treating practice like it was the race. Five drivers crashed (Denny Hamlin, Kyle Larson, Alex Bowman, Ryan Newman and William Byron). Each driver went to a backup car and started in the rear of the field.

There were 9 caution flags in the race. Many of the fastest cars in the race got into the wall. The average length of a green-flag run was only 26 laps so it was very important to have a car that was fast on the short runs and restarts. The hot track temperatures had a lot to do with the tires going down in the race. The TV broadcast said the track temperature was over 110 degrees and that burns the rubber quickly.

– Martin Truex Jr. has been good at New Hampshire (one of his many “home tracks”). Truex entered the race with 5 consecutive finishes in the top 7 at the Magic Mile. He had another decent race at the track last year. Truex qualified 6th and he spent most of the day running in the top 10. Truex finished 6th in Stage 1, but he had contact with Clint Bowyer in Stage 2. The No. 19 car was able to rebound from the accident and finish 5th.

– Kyle Busch had one of the fastest cars in the race. That should not have surprised anyone since Busch finished 1st and 2nd in his previous 2 races at the track. Busch qualified 2nd and dominated most of the race. The No. 18 car led a race-high 118 laps, but Busch got into the wall on lap 215. The damage was not too bad though and Rowdy was able to finish the race in the 8th position.

– Denny Hamlin had a great chance to win the race at New Hampshire last year. He had one of the fastest cars in practice and it translated into race speed. Hamlin had to start in the back because of his wreck in practice. He quickly made his way to the front. Hamlin finished 9th in Stage 1 and 6th in Stage 2. He took over the race in the final Stage. Hamlin led 113 laps in the final Stage but gave up his track position for tires. This allowed Kevin Harvick to take the lead and win the race. Hamlin finished 2nd.

– Erik Jones was just another good Joe Gibbs Racing driver in the race. Jones was also fast in practice and good in the race. The No. 20 car qualified 4th and Jones had a 6.71 average running position (5th best). He finished 2nd in the first Stage and led 4 laps. Jones finished the race in the 3rd position.

– Brad Keselowski won the pole and he had one of the best cars at the start of the race. The No. 2 car led 12 laps in Stage 1 and finished 5th. Keselowski spent most of the race running in the top 10. He had a race-high 4.44 average running position but the late cautions did not help the No. 2 team. Keselowski finished the race in the 10th position.

– Joey Logano had a decent race. He did not need to win the race since he was secured in the playoffs but just needed a top 10 finish. That is what Logano got. The No. 22 car qualified 8th and they maintained their track position for most of the race. Logano had a 9.66 average running position (10th best) and finished the race in the 9th position.

– Ryan Blaney entered the race with 2 consecutive top-10 finishes at New Hampshire. He made it 3 in a row after the race at the Magic Mile last year. Blaney qualified 5th and he had a 6.93 average running position (6th best). Blaney finished 7th in the first Stage but gave up his track position in Stage 2 to pit before the Stage ended so he could start the final Stage up front. Blaney came home in the 4th position.

Matt DiBenedetto had a great race. He looked good in practice and his speed translated into race speed. DiBenedetto qualified 7th and the No. 95 car spent most of the day running around the 11th position. DiBenedetto used good pit strategy to finish the race in the 5th position. He should be better this week in his Wood Brothers Ford.

– Kevin Harvick entered the race at New Hampshire last year as the defending race winner. He was not the favorite to win though because the No. 4 car had not been to Victory Lane yet in the first-half of the season. Harvick qualified 14th and finished 8th in both Stages. He did not have the fastest car but was able to use pit strategy to steal track position and beat Denny Hamlin to the checkered flag. It was the 3rd trip to Victory Lane in the last 5 races at New Hampshire for Harvick.

– Clint Bowyer had a good car at the beginning of the race. The No. 14 car qualified 16th and quickly made his way through the field. Bowyer finished 4th in the first Stage but had trouble in Stage 2. Bowyer got loose on a restart as the cars went three-wide. Bowyer got into Martin Truex Jr. and the team spent the rest of the race fixing the damage. Bowyer finished the race in the 20th position.

– Aric Almirola used good pit strategy and a fast race car to get a lot of points at New Hampshire last year. Almirola qualified 9th and stayed out while other teams pitted in the first two Stages. Almirola was able to finish 3rd in Stage 1 and won Stage 2. Almirola led 12 laps and finished 11th in the race.

– Chase Elliott had a tough race. He qualified 12th and lost some positions at the start of the race. Elliott spent most of the race running right outside the top 10. He had a belt break on the water pump and the team spent a lot of time on pit road fixing it. Elliott lost a lot of laps and finished the race in the 29th position.

– William Byron had to start from the back in a backup car because of a wreck in practice. He needed points to secure his spot in the playoffs so the No. 24 team used an aggressive strategy. Byron had a hard time getting to the front in the first Stage but pit strategy allowed him to finish 4th in Stage 2. He spent most of the day running around the 15th position. When the checkered-flag waived, Byron crossed the line in the 12th position.

– Alex Bowman had a bad weekend. He broke a drive-shaft in the first practice and then was involved in a wreck in the final practice. The No. 88 team had to use Jimmie Johnson’s backup car for the race and it was not setup for Bowman’s driving style. He started in the back and had a 16.96 average running position (16th best). Bowman was able to use some pit strategy to finish the race in the 14th position.

– Jimmie Johnson entered the race 10 points above the cut-line for the final playoff position. He needed as many points as possible. His car was fast in practice and looked decent in the first-half of the race. Johnson qualified 10th and just missed out on the final Stage point in Stage 1. Johnson struggled at the end of the race and finished 30th.

– Kyle Larson had a decent car but nothing to show for it. Larson had to start in the back after crashing his primary car in practice. He quickly made his way to the front and his car was the best of the cars that started in the back. Larson was able to finish 7th in Stage 2 but his race was ended on lap 264 when Larson hit the wall with only 37 laps left. The No. 42 car finished the race in the 33rd position. Matt Kenseth will drive this car Sunday. Kenseth has 4th-place average finishing position in his last 6 races at New Hampshire. It is by far his best track.

– Kurt Busch had a decent car but a poor finish. The No. 1 car qualified 3rd and he spent a lot of time following his brother Kyle around the track. Busch was able to finish 10th in Stage 2. He decided to take 2 tires on a late restart and it did not pay off. Busch finished the race in the 18th position.

– Ryan Newman was involved in a wreck in practice so he had to start the race in a backup car from the rear of the field. Newman slowly picked off cars one at a time. He did not score any Stage points in the first Stage but the No. 6 team used pit strategy to finish 3rd in Stage 2 (Newman needed as many points as possible to make the playoffs). Newman was able to maintain his position and finish 7th in the race and score 19 place differential points.

– Ricky Stenhouse Jr. qualified 11th and he was running right outside the top 15 for the first-half of the race. He was in a “must win” situation so he was racing aggressively. Stenhouse was battling Erik Jones for position on lap 138 when Stenhouse was sent into the wall. The car was crushed and Stenhouse finished 36th. Stenhouse said, “That 20 car ran over me. Plain and simple. I owe him one” Drivers usually have long memories so we will want to watch the No. 47 and No. 20 cars if they get near each other in the race Sunday.

– Austin Dillon did not have a good race. The No. 3 car qualified 21st and he brought out the first caution of the race. Dillon had a right-front tire go down on lap 45 and it sent the No. 3 car into the wall. The team spent the rest of the race fixing the damage but their day ended on lap 268. Dillon finished 32nd.