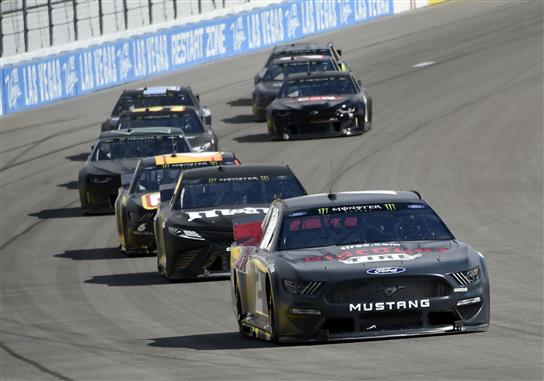 The 2018 NASCAR season will begin in less than a month. One of the biggest factors in Fantasy NASCAR is the type of car each driver will have to work with. We have seen it so many times… One manufacturer will start the season slow and another one will dominate the competition simply because the teams have an understanding of how to get the most out of their chassis. If you want your fantasy team to start out hot, you must know which manufacturer will have the edge early in the season.

NASCAR will be going to a new rules package this year. The cars will have less horsepower, a larger spoiler (from 2.375 inches to 8 inches), lager front splitter (from ¼  inch to 2 inches) and air-duct to create more airflow through the car. This means there will be more drag on the car and the leader will not be able to drive away from the field. The manufacturer who figures out how to take advantage of the new rules package will dominate the races in 2019.

Toyota won the NASCAR manufacturer trophy for the first time in 2016. They followed it up with a repeat win in 2017. Last year was a close race between Ford and Toyota for the top spot in the sport. Toyota won 13 races while Ford found Victory Lane 19 times. It should be a battle between these two manufactures again in 2019, but this time Toyota should regain the manufacturer’s trophy.

Toyota Racing Development (TRD) has a lot of money to invest into their teams. Most of the money will go to Joe Gibbs Racing and some will funnel down to Leavine Family Racing. With so much money to spend and so few cars to share the wealth, the Toyotas will have a lot of cash to dial in the new 2019 rules package. I expect the Toyotas will have an advantage early in the season at the 1.5-mile and 2-mile ovals.

Another thing Toyota has going for them is the talent among their stable of drivers. Four of their six Toyota drivers made the playoffs in 2018. Kyle Busch and Martin Truex Jr. combined to win 12 races and lead 2,485. Erik Jones is only going to get better. The new rules package will make the cars handle a lot like the trucks in the Gander Outdoors Series. Jones won a championship in that series and he should be a lot better this season. Denny Hamlin has Christopher Bell waiting to take his seat in the No. 11 car for Joe Gibbs Racing. Hamlin needs to have a bounce-back season and he should do it with all of the resources of TRD.

Leavine Family Racing left Chevy to join Toyota and fill the void left by Furniture Row Racing. It will likely take a while for the No. 95 team to get up to speed with their new manufacturer but having Mike Wheeler (he spent five seasons at Joe Gibbs Racing) as a crew chief should make the transition a lot smoother. Matt Dibendetto should finish a lot of races in the top 20 this season.

Tanner Berryhill is a driver most people do not know. He is racing for the Rookie of the Year in 2019. Obaika Racing purchased the charter, cars and engines from the defunct BK Racing. TRD will not invest a lot of their money into this team. Berryhill should have a goal of finishing each race in the top 30.

Brad Keselowsi sat on top his soup box and shouted, “Our Fords cannot compete with the Toyotas!” before the 2018 season began. Boy was he wrong. Ford won the manufacturer’s trophy for the first time since 2002. The Ford drivers won 19 races (53%), led 5,785 laps (57%) and won 14 poles. Ford also won the Monster Energy NASCAR Cup Series trophy with Joey Logano. It was the first time since a Ford driver won the championship since Kurt Busch won in 2004. Stewart-Haas Racing and Team Penske Racing were two of the top teams last year. That will not change in 2019.

Ford will be debut a new car this season. The manufacture will switch from the Fusion to the Mustang chassis. Ford has been working on this car for two years. I do not expect the team to struggle as much as Chevy did last year with the Camaro ZL1 car. The new aerodynamics package should also level the playing field and make the transition to the Mustang a smooth one. Each manufacturer will have a lot of work to do over the offseason to figure out the new down-force package.

Kevin Harvick, Joey Logano and Brad Keselowski will lead the list of Ford drivers this season. These three drivers should win multiple races and be a serious threat to win the championship. Ryan Blaney and Aric Almirola are the sleeper picks for Ford. Blaney is getting better each season and this could be the year when he wins multiple races. Almirola got hot in the playoffs. It will be interesting to see if the No. 10 team can carry their success from last year into the 2019 season.

Ford will win a lot of races. It will once again be a tight battle with Toyota for the championship. I would list Ford as my No. 1 manufacture but there is a question about how the new Mustang will perform on the track. There are no questions about the Toyotas so Ford gets the No. 2 spot in my rankings.

Chevy made the switch from the Chevy SS to the Camaro ZL1 chassis for the 2018. The switch did not result into success on the track. Chevy only won four races last year and led 1,450 laps (14%). Three of the wins were from Chase Elliott (Watkins Glen, Dover and Kansas) and the other was from Austin Dillon in the Daytona 500. To say Chevy got off to a slow start is understatement. They had a hard time finishing in the top 10. Winning a race was the least of their problems.

The issues with the Chevy Camaro ZL1 car were not all Chevy’s fault. NASCAR decided to switch to a new Optimal Scanning System (O.S.S.) in January of 2018. The new way of inspecting the cars is more precise and does not allow for much aerodynamic advantages for each manufacturer. Chevy spent two years working on the Camaro and designing the car to take advantage of flaws in the old “claw inspection” system NASCAR was using. The new O.S.S. took away all of the advantages Chevy was planning to have in 2018. The cars showed a lot of improvement in the playoffs so there is hope for Chevy in 2019.

The gap between Chevy and the other two manufactures should be closer in 2019. Hendrick Motorsports is in a transitioning period and it looks like they are closer to finding their way back to the top. Chase Elliott is a star and the crew chief changes made between the No. 48 and No. 24 cars should give the teams the spark they have been looking for.

Kurt Busch will join the list of Chevy drivers in 2019. Whenever he joins a new team, they have a lot more success than they did before Busch arrived. He will bring some knowledge from Stewart-Haas Racing that should make Chip Ganassi Racing a threat to win multiple races this year.

The one thing holding Chevy back is the lack of cooperation between Hendrick Motorsports and Richard Childress Racing. If these two teams worked together more, the entire fleet of Chevy drivers would improve. I doubt it will happen any time soon, so Chevy will remain the No. 3 manufacturer in my rankings.