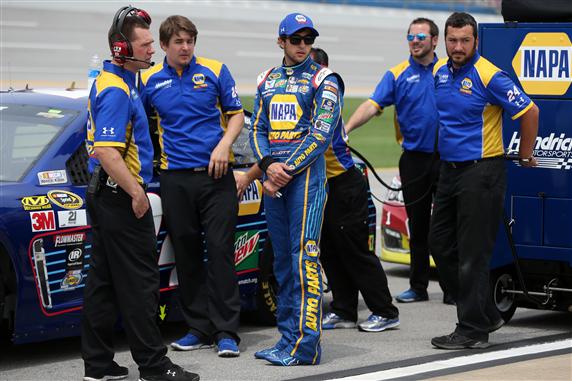 The 2017 season in the Monster Energy NASCAR Cup Series will change the way we play fantasy NASCAR for the near future. The sanctioning body of NASCAR decided to implement new rules that include breaking down each race into three segments and awarding points for the top performers in each segment. (You can read more about the rule changes here: NASCAR Rule Changes for 2017) Crew chiefs will play an important role in determining which driver goes to Victory Lane each week.

The best way to select your fantasy team in the past was to look at the speed chart from practice and look at the driver’s past performance at the track. This gave you a good idea of which driver would have the upper hand in the race. The new format NASCAR implemented for the 2017 season will require more strategy from the pit box in order to gain track position.

Fantasy teams should still consider speed and past performance, but looking at which crew chiefs have been able to use the best strategy in the races will be just as important.

Some crew chiefs are very good at setting up a car for the race. Others are good at looking at the flow of the race and determining the best strategy to get their driver to the front. Very few crew chiefs are good at both. Here is my list of the top crew chiefs in the Monster Energy NASCAR Cup Series when a race comes down to strategy…

The 2017 season will mark the seventh year Paul Wolfe will serve as the crew chief for the No. 2 Team Penske Ford. Wolfe and Brad Keselowski work together better than any other pair in the sport. They are constantly thinking outside the box to find ways to use pit strategy to help them win races. More often than not, their strategy pays off. No crew chief-driver combo performs as well as Wolfe and Keselowski when a race comes down to fuel-millage. The new rules package should play right into the hands of the No. 2 team. Fantasy teams should expect Keselowski to finish up front early in the season, until the rest of the NASCAR teams figure what they are doing.

I am sure some people will question why Chad Knaus is not at the top of my list of crew chiefs. It is hard to argue that the crew chief with seven championships is not No. 1, but this list is for the crew chiefs that are able to use the best strategy in the race. Knaus is probably the best crew chief overall. He knows how to set up a car for the track, but Paul Wolfe is a little better at using strategy to get his driver to the front (Not that Jimmie Johnson needs any help anyways).

Jimmie Johnson often wins races early in the season and secures his place in the playoffs. The No. 48 often takes some unnecessary gambles in races since they know they have nothing to lose. The new race format will force Knaus and Johnson to take less risk to ensure they finish up front. This should only help your fantasy team in 2017. They may not be No. 1 on my list, but Knaus and Johnson is a close second.

Todd Gordon does not get enough credit as being one of the top crew chiefs in the sport. This is mostly because he is overshadowed by his teammate, Paul Wolfe. Gordon and Logano are also very good at using strategy to pick up spots on the race track. Ford provides the team with a car that is able to get good gas millage (if you consider four miles per gallon good) and Gordon is able to take a gamble to win a race by saving fuel.

Gordon and Logano have been together for four seasons. As Logano matures as a driver the crew chief and driver relationship should become stronger. Gordon will know he can trust Logano to follow his strategy and get the No. 22 car to Victory Lane. The combination of Ford, a more mature driver and four-years of success make Logano one of the drivers to beat in 2017.

There were a lot of questions about Joe Gibbs Racing selecting Adam Stevens as the crew chief of the No. 18 car in 2015. So what does Stevens do to silence his critics? He leads Kyle Busch to first Sprint Cup Championship (in a season where Busch missed 11 races).

People say that success breeds more success. Stevens and Busch have won 28 races together in the Monster Energy NASCAR Cup Series and the Xfinity Series. The two understand what the No. 18 car needs to get to Victory Lane. Stevens has always been good at providing Busch a fast car for the race. He is getting much better at mapping out a strategy to take advantage of Busch’s skills at a driver. The No. 18 car should be at the top of fantasy team’s list in most races this season.

The No. 78 team was one of the biggest surprises in 2016. One of the reasons why the No. 78 car was so fast was because of the switch to Toyota and the alliance with Joe Gibbs Racing. The crew chief skills of Cole Pearn should not be underestimated. He is one of the brightest minds on the pit box in NASCAR’s premiere series.

Pearn took over the crew chiefs duties for the No. 78 car in 2014 after serving as the team’s lead engineer. Pearn has to be near the top of the list when it comes to setting up a car for the race. He was so good last year that he took the equipment provided by Joe Gibbs Racing and outraced them at most tracks. He now knows he has top-level cars and an elite driver. Pearn is getting better at using strategy to win races. The 2017 season could be the year when it all comes together for the No. 78 team and they win their first championship.

If I was simply ranking the crew chief that could get the most speed out of the car, Rodney Childers would be at the top of the list. The No. 4 car usually shows up at the race track with a car near the top of the speed chart. Childers and Harvick often lead many of the laps only to get beat by another team that has a better strategy then them. The team has 23 finishes in second-place in the last three seasons. They need to turn those runner-up finishes into wins for Childers to be at the top of this list. Second place is not a bad finish in fantasy racing though, so teams should consider Harvick as one of the top drivers in fantasy NASCAR.

Jason Ratcliff is another crew chief who is overshadowed by his teammates. Ratcliff has directed his cars to Victory Lane 36 times in the Xfinity Series and 14 times in the Monster Energy NASCAR Cup Series. All but one of his wins in the MENCS came with Matt Kenseth as his driver (the other came with Joey Logano in 2012).

The pair worked well together last year as Kenseth was able to lead laps in 10 of the first 12 races. The No. 20 team was struck with more bad luck than any team in the series. None of the team’s poor finishes were Ratcliff’s fault. He often put Kenseth in a position to win the race. Kenseth may not be as good as the top five drivers in the sport but fantasy teams should know the Ratcliff and Kenseth will go to Victory Lane a couple of times in 2017.

After working with veterans Mark Martin and Jeff Gordon for seven seasons, Alan Gustafson was paired with rookie Chase Elliott last year. The two worked well together as Elliott made the Chase and won the Rookie of the Year award. Elliott had 10 finishes in the top five but was unable to get his first win. That should change in 2017.

Gustafson knows how to setup a fast car for the race. As his driver matures the two should be able to capitalize on strategy to make their way to the front. It is hard to tell a young driver to gamble on a strategy when he does not fully understand why the team is doing it. Elliott is wise beyond his years and a second season in the sport should make him one of the elite drivers in the Monster Energy NASCAR Cup Series.

Tony Gibson has been around for a while. His first job as crew chief in NASCAR premier series came in 1994. In 2014 Stewart-Haas Racing moved Gibson from Danica Patrick’s car to Kurt Busch. The two have worked well together ever since.

Gibson had to know that his job as crew chief for Busch was to not only provide fast cars but keep his driver calm at the race track. He has done a tremendous job at both. Busch did not have any “major” blowups since Gibson took over at the top of the pit box. The team was one of the best at finishing on the lead lap in 2016, but only scored one win (Pocono). Gibson may have to gamble more to get the No. 41 car to Victory Lane more often and make Busch a more valuable option for your fantasy team.

Mike Wheeler served his first full season as the crew chief for Denny Hamlin last year. The team got off to a great start by winning the Daytona 500. The team won three races (Daytona, Watkins Glen and Richmond) but let others slip away (Sonoma). Wheeler and Hamlin work well together. No team in the premier series was as good at setting up a car for qualifying as Wheeler. Hamlin was able to start 33 of the 36 races in the top 10. Track position is very important in NASCAR and it always helps to start up front. This could be a dangerous team if they can figure out a way to use strategy to win more races.