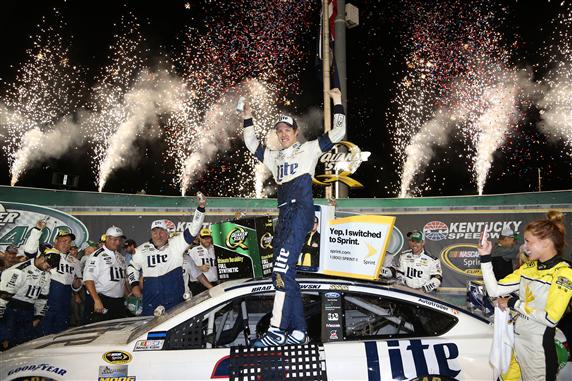 NASCAR decided to make drastic changes to the scoring system in 2017 and this should make choosing your fantasy team more difficult. Whenever you add more variables to an equation, finding the solution to the problem gets harder. Finding a fantasy expert to help with your picks may be more important this year than it has been in the past. Fantasy Racing Tips is here to help.

There is going to be a lot for fantasy teams to consider when they choose their teams this season, but four factors will be more important than the others.

The new racing format will test the skills of each crew chief. Figuring out how to get track position will be as important as driving the car this year. Selecting the best fantasy NASCAR team used to be only about selecting the best driver. Now fantasy players must select the team (Driver + Crew Chief). The strategy of the crew chief this season can make or break your fantasy team.

So who are the savviest crew chiefs? At the top of the list is Paul Wolfe of the No. 2 Team Penske Ford. Wolfe and Keselowski have teamed up to win many races because of their ability to think out of the box. Keselowski will be the driver who should benefit the most from the changes NASCAR made (It should not surprise you since he was a member of the team who created the new rules). Fantasy teams should use Keselowski a lot early in the season until other teams catch on to what they are doing.

Here is my list of the top crew chiefs when it comes to strategy….

Having a savvy crew chief is important, but if the team cannot make a fast pit stop the strategy really does not matter. The new format is going to require teams to make more pit stops under caution this year. Teams who can quickly service the car will gain valuable track position in the pits and give your fantasy team the ability to finish up front.

PitTalks.com did a survey of all of the pit crew coaches to see which teams had the fastest pit crew in 2016. The team that came up the most was the pit crew for the No. 22 Team Penske Ford of Joey Logano. Front tire carrier (Dylan Dowell), rear tire changer (Zach Price), jackman (Ray Gallahan) and gasman (Kellen Mills) were all mentioned as among the best in the sport. Logano’s pit crew may have lost him the championship in 2015, but they stepped up in a big way in 2016.

Here is my list of top pit crews based upon the rankings from NASCAR America, the PitTalks.com survey and nascar.com midseason pit crew rankings…

The new segment format should allow for closer racing. Closer racing should bring more wrecks. More wrecks bring more cautions. More cautions bring more restarts. Having the drivers who can pick up spots on the restart will be important in Fantasy NASCAR in 2017.

Everyone knows that the last car you want to be lined up next to on the restart is the No. 18 car. Kyle Busch has been the best driver at gaining positions after the green-flag is waived. Who are the other drivers who take advantage of restarts? Here is a list of the top-10 fastest drivers on the restart in 2016…

The days of running in the middle of the pack and saving your car for the end of the race are over. The new format rewards drivers to consistently run laps in the top 10. With so many bonus points on the line in 2017, drivers will do whatever it takes to run up front and stay up front.

Some drivers won races early in the 2016 season. They knew they had a spot in the Chase reserved so there was little incentive for them to run consistently in the top 10. Two of these drivers include Denny Hamlin (Daytona 500) and Jimmie Johnson (Atlanta). Both of these drivers probably would have had better average running position stats if they were racing under the 2017 rules package.

So, Who Are the Favorites?

When you consider the best crew chiefs, the fastest pit crews, fastest drivers on the restarts and which drivers run in the top 10 consistently; there are 10 drivers who should be the favorites to score a lot of fantasy points this season. Here are my updated Fantasy NASCAR Rankings after the new rules package was announced…