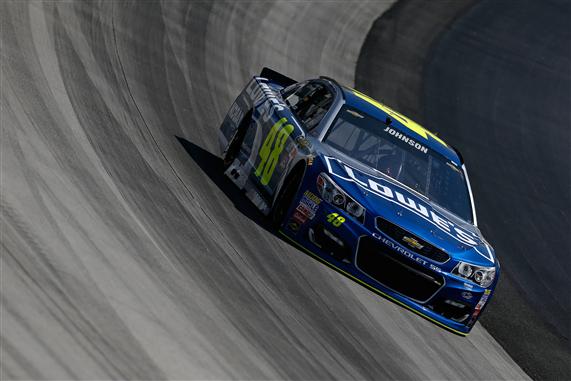 The MENCS will compete at Dover International Speedway this week. The SlingShot Auto Racing game awards 20 bonus points to the driver who wins the race. It may be wise to chase these 20 points since the trend at Dover is to only have 2 dominators. The other four selections should be drivers who can move through the field and score position differential points this week.

Kyle Busch is my pick to win and score the 20 bonus points. He has won 3 of the last 4 races and his pit crew ranks No.1 in the series. I think Busch will beat the competition off of pit road to win this race. Busch had struggled in his last 3 spring races at Dover but when you watch the races it was more about bad luck than it was about a slow car. Busch should be a lock for a top-3 finish Sunday.

Jimmie Johnson did exactly what I wanted him to do… He qualified outside the top 15. Johnson starts 19th and he has a great chance to finish in the top 5 and maybe even win this race. Johnson started 17th and finished 3rd last October and qualified 14th and went to Victory Lane in this race last year. Johnson can win from any starting position at this track.

Clint Bowyer could win this race. His car is that fast. Bowyer was 3rd fastest in final practice with the fastest 10-lap average speed. I like Bowyer to move forward from his 12th starting position. I thought about going with Joey Logano in this spot, but Bowyer looks a lot faster and he is a lot cheaper.

Austin Dillon is the risky driver in my lineup. I was not planning on using Dillon and then he qualified 27th. Dillon has not been great at Dover in his career but he is not 27th worst driver at this track. Dillon has an average finishing position of 16th at the Monster Mile. I expect him to move up 10 spots and score 20 bonus points for my team.

Kasey Kahne has been very good at Dover in his career. He has not finished worse than 17th at the Monster Mile since 2014. I know he is not in as good of a car as he was when he drove for Hendrick Motorsports, but this track is more about the driver than it is about the car. I expect Kahne to have a good run Sunday.

Here are the rest of my picks for the Dover….