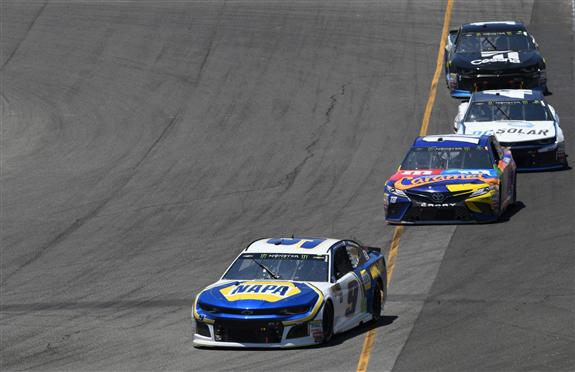 The races at Sonoma are always won and lost by strategy. Some teams will short pit before the Stages to gain track position. Most of the teams will “run the race backwards” meaning they will try to use a fuel strategy to make sure they have just enough fuel to make it to the checkered flag and make the fewest amount of stops as possible. This makes this race tough to predict, but some teams are better at using strategy than others.

Here is my starting lineup for the Toyota / Save Mart 350…

CHASE ELLIOTT (8): My plan this week was to use Kyle Larson for qualifying points and use Elliott for the race. The strategy worked out perfectly. Larson won the pole and scored us 10 bonus points and Elliott will start right next to him. Elliott has won four of the last 10 road course races and has averaged 31 laps led per race at Sonoma. The No. 9 car should spend a lot of time up front, scoring Stage Points with a good chance to win Sunday.

KURT BUSCH (8): Busch has been on a hot streak over the last month. He won at Kansas last month and finished 3rd last week at WWT Raceway. Now Busch gets to compete at Sonoma. He has finished five of the last six races at this track in the top-10. That includes a sixth-place finish last year. His 23X1 Racing car, built by Joe Gibbs Racing, will have more speed than what he had last year with Chip Ganassi Racing. I will use another allocation with Busch at Sonoma.

ROSS CHASTAIN (6): Chastain is one of the underrated drivers on the road courses. He won the race at COTA earlier this year and he finished seventh at Sonoma last year. Chastain had some extra track time since he competed in the Truck Series race Saturday. That extra seat time should help Chastain figure out the rhythm on this technical track. I will take a chance with Chastain Sunday.

AJ ALLMENDINGER (6): My plan this week was to use Austin Cindric for qualifying points and use Allmendinger in the race. I am sticking to the plan. Allmendinger won the road course race in the Xfinity Series at Portland Raceway last week. He looks fast again in his Cup Series car. Allmendinger is running a limited schedule this year so I will use him while he is behind the wheel of the No. 16 car for Kaulig Racing.