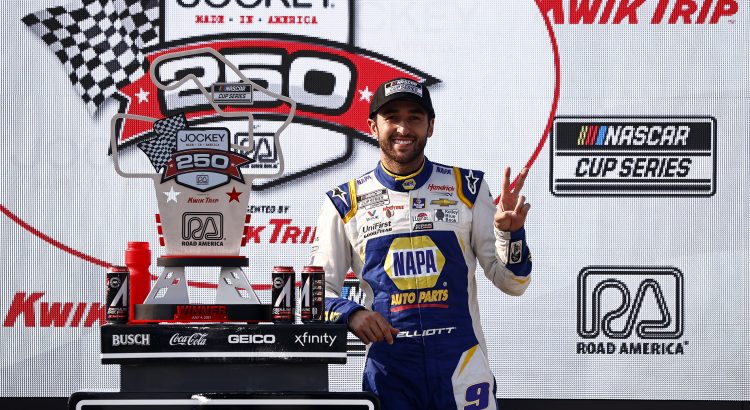 The Cup Series had their normal practice schedule for the road courses Saturday. The teams had 20 minutes to dial in their cars for the Kwik Trip 250. That is not a lot of time to make long runs at a 4-mile track. The teams had their group qualifying immediately after practice and the cars were impounded after the field was set for the race. That means the cars will start the race with the speeds they had in practice and qualifying Saturday. I adjusted my picks based on what we saw on the track Saturday and the info I received from the garage.

Here is my starting lineup for the Kwik Trip 250…

CHASE ELLIOTT (7): Elliott was my pick for this race before the season began and I did not see anything in practice to change my mind. Elliott posted the 21st fastest speed in practice but that had a lot to do with the traffic the No. 9 car was in. Elliott won the pole and passing is going to be tough Sunday. Elliott won last week and he won at Road America last year. He is my pick to be in Victory Lane at Road America.

TYLER REDDICK (7): Reddick is not the first name that comes to mind when people think of road course racing but he has been pretty good. Reddick finished fifth earlier this year at COTA and he finished eighth at Road America last year. The secret to his success has been qualifying. When Reddick qualifies up front, he does a good job at staying up front. Reddick posted the second fastest speed in practice and qualified fourth for the race Sunday. Reddick should score well for your Driver Group Game lineup at Road America.

ALEX BOWMAN (7): I am going to play it safe and use one of the drivers with the highest floor this week. Bowman finished second at COTA and his average finishing position in his last 15 road courses races is 11th. That is a lot of consistency over a long period of time. I doubt Bowman will compete for the win but I will take a top-10 finish from the No. 48 car. He should be able to finish in the top-10 from the eighth starting position.

AUSTIN CINDRIC (4): My choices for Group C were AJ Allmendinger and Austin Cindric. Both are good road course drivers but Cindric was happy with his car and Allmendinger did not have one good thing to say with his car. Cindric posted the fourth fastest speed in practice and he qualified fifth for the race. Cindric has the track position to score a lot of Stage Points and finish in the top-10 Sunday.