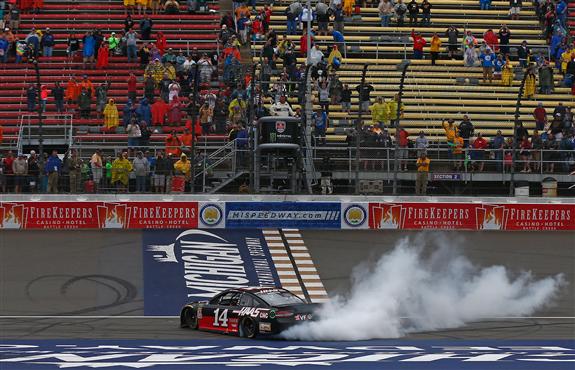 This is the second week in a row where Fantasy NASCAR players get an opportunity to see two MENCS practices before their Driver Group Game picks need to be selected. We need to take advantage of this opportunity whenever we get the chance.

Drivers will be changing positions at a rapid pace in the FireKeepers Casino 400 so I am not changing my original picks too much. There are some drivers who impressed me in practice so I do want to select these drivers for my team this week.

Here are my updated picks for the FireKeepers Casino 400…

Kevin Harvick (5): I was trying to make it through this race without using Kevin Harvick or Kyle Busch but I cannot do it. The word in the garage is that Harvick has the car to beat Sunday. The No. 4 car finished 2nd in the June race and won the August race at Michigan last year. It looks like this car is fast again. I will use another allocation with Harvick if he qualifies up front Saturday.

Clint Bowyer (4): The No. 14 car has been running well lately and he is fast again this week. His crew chief said in final practice, “The car is so good there is nothing more we can do to it.” Bowyer has finished 7 of the last 8 non Superspeedway races in the top 10. He also won the June race at Michigan last year. Bowyer posted the 8th-fastest 10-lap average speed and the 3rd-fastest 20-lap average speed in final practice. He should be a threat to win again this week.

Erik Jones (4): This Michigan native has made it clear that he wants to win at his home track and JGR has provided him with a car fast enough to get the job done. Jones has really run well in the 550 HP engine, higher-downforce aero package. He finished 3 of the last 4 races on non Superspeedways using this package in the top 4 (Jones finished 3rd at Pocono, 3rd at Kansas and 4th at Texas). Jones was 7th-fastest in final practice with the 3rd-fastest 10-lap and 15-lap average speed. The No. 20 car is fast so I will use Jones this week.

Kurt Busch (6): Busch has was again unloaded with a lot of speed at Michigan. Busch posted the 6th-fastest lap in final practice with the 6th-best 10-lap average speed. Busch has a series-high 3 wins at Michigan. If he is going to win his first race of the season it should happen this week. I have no problem using another allocation with Busch.

Matt DiBenedetto (7): DiBenedetto has not run well in a month but I have a feeling he wil have a good race Sunday. DiBenedetto posted the fastest lap of the Group C drivers and he had the 2nd fast 10-lap average speed in the group. DiBenedetto is a hard driver to trust right now, but I need to save Buescher for the tracks where he posts top 20 lap speed in practice. I will save my allocation with Buescher and go with DiBendetoo instead.

Daniel Hemric (3): Hemric said before the race at Pocono on SiriusXm NASCAR radio, “I just want to get through the race at Pocono without making any mistakes and move onto Michigan. I love that track (Michigan). He looked like the best driver from Group C in practice. Hemric posted a 10-lap average speed almost identical to Joey Logano. I am running low with allocations with Hemric but this is a great track for him.