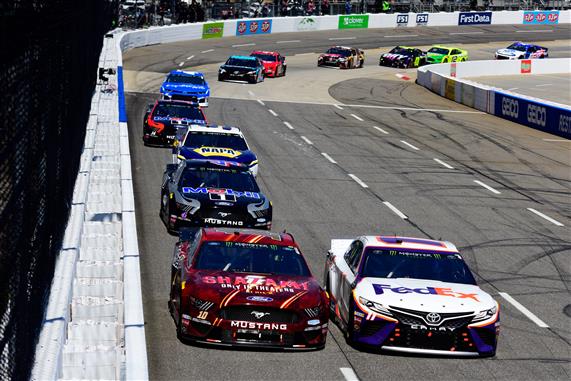 The NASCAR inspection is going well. As of the posting of this article, the top 17 drivers all passed inspection. I did have a night to sleep and think about the Fantasy NASCAR picks I posted Saturday. I still like the DFS picks but I feel like I need to make a change to the Fantasy Live picks. Here is my updated Fantasy Live lineup for the First Data 500…

I am still using Denny Hamlin and Martin Truex Jr. As my Playoff Drivers. Hamlin starts from the pole, has the No. 1 pit stall and he has a history of dominating this race. He is a safe pick to score a lot of Stage points and finish in the top 5 (Hamlin is my pick to win.

Martin Truex Jr. Is still looking for his first win at Martinsville but it is not like he has not been close. If he would have been more aggressive with Joey Logano last year he would have won the Grandfather Clock in this race in 2018. Truex starts 3rd and that inside line in gold. He should run second behind Hamlin, score a lot of Stage points and battle for the lead at the end of the race.

I am leaving Clint Bowyer and Aric Almirola in the Non-Playoff Driver position. Both driver dominated the long-run speed charts in final practice and they start in the top 10. They ran well in March, scored a lot of Stage points and I expect the same today.

I originally had Kyle Busch as my Garage pick. While I expect Busch to compete for the win; I trust Denny Hamlin and Martin Truex Jr. enough that I decided I need another option in the Non-Playoff Driver category. I am using Brad Keselowski as my Garage pick. He absolutely destroyed the field in the March race. His practice speeds were not great but he was 22nd fastest in final practice in March so there is a good chance he runs up front, even without a dominating performance in practice. I will have Keselowski as a backup to Bowyer and Almirola.