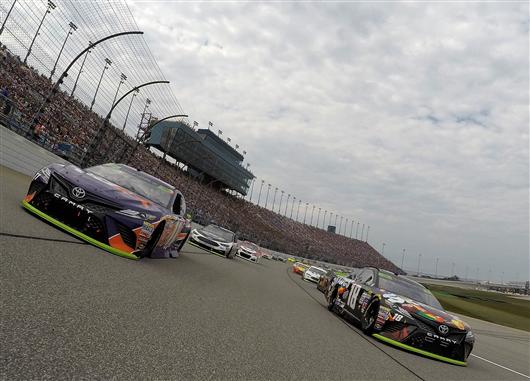 When NASCAR announced they would inspect the cars after all of the practices and qualifying was completed, I had a strong feeling there would be big problems. I was right. Martin Truex, Denny Hamlin, Jimmie Johnson and Chris Buescher failed their post-qualifying inspection. Their qualifying times were disallowed so they will start and be scored in Fantasy NASCAR games from the back. This means I must change my picks I posted Saturday night.

The SlingShot Fantsy Auto Contest is the game which will be most affected by the post-qualifying inspections. This game awards 2 points per position gained in the race so the four drivers who start in the back are great picks for the SlingShot game. I still like Kevin Harvick to win the race so I will have the No. 4 car in my lineup and try to score the 20 bonus points for winning the race.

Here are my updated picks…

The only change to my Fantasy Live picks will be to my Garage Driver pick. I am taking out Denny Hamlin (Since he is starting in the back) and replacing him with Ryan Blaney. I expect Blaney to take an early lead in the race and score Stage Points.

I am not too worried about Martin Truex Jr. making his way to the front from the 36th starting position. I expect Truex to be in the top-10 before the end of Stage 1. If for some reason he gets stalled in the pack I will use Ryan Blaney to replace him.

Denny Hamlin was my pick for the One & Done game but now he starts in the back. I will save Hamlin for a race where he has less risk.

I really wish I could use Paul Menard this week. If I had not used him at Las Vegas, Menard would be my pick this week. My pick this week will be Aric Almirola. The No. 10 car posted the 5th fastest speed with the 7th best 10-lap speed in final practice. Almirola has been running really well the last month so I will use him as my One &  Done pick at Chicagoland Speedway.

I will not be making any changes to my Driver Group Game picks. I still like the lineup I posted Saturday night…

I am not making any changes to my Fantrax Bronze Point Salary Cap Game picks. I expect Martin Truex Jr. to quickly make his way to the front so there is no need to switch him with another driver. Here is my lineup…