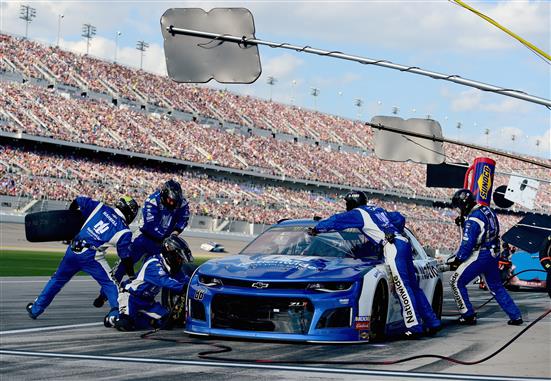 The green flag will waive for the 2020 Fantasy NASCAR season at Daytona in mid-February. It is always an exciting time of year because no matter how bad your picks are in Fantasy NASCAR, you enter the season with the feeling that this is the year you are going to take home your league trophy.

The Fantasy NASCAR landscaped has changed a lot over the last five seasons. Yahoo, ESPN and Fox all eliminated their games. This left people scrambling to find a new website to host your friends and family’s battle for the Fantasy NASCAR Championship.

I talk to a lot of fans of NASCAR and many of them tell me that they quit playing Fantasy NASCAR because they do not know where to play. Well, I am here to help. Here is a list of websites where you can play Fantasy NASCAR in 2020…

– The Driver Group Game replaced the Yahoo Fantasy Auto Racing game two years ago. The website for this game is (https://drivergroupgame.com/). This is my favorite site to play Fantasy NASCAR because it is pretty easy.

– The most popular game in the Fantasy NASCAR industry is the Fantasy Live game on nascar.com. The website for this game is (https://fantasygames.nascar.com/live/picks)This game is more difficult to understand, but after a week or two people get the hang of it.

Each week you select four drivers for your team and one garage driver. These drivers earn points based on where they finish the race, how many laps they lead and how many Stage points they score. The “Garage Driver” is a bonus driver for your team. You can replace any of your four starting drivers with your garage driver as long as you make the change before the end of Stage two. Once the final Stage starts, you are no longer allowed to change your lineup.

This game is not as complicated as it sounds. If you need any help, sign up on FantasyRacingTips.com and follow my picks. I have beaten 99% of the competition in this game for eight years in a row.

– Each season I post my One & Done picks. These picks are for games where you simply pick one driver for each race and then you cannot use that driver for the rest of the season. This is by far the easiest way to play Fantasy NASCAR.

Most people ask me where to go to play in a One & Done game. The best place is the NASCAR Pools Online site. Their website can be found at (https://nascarpoolsonline.com/).

NASCAR Pools Online is the most customizable Fantasy NASCAR site on the web, and they have the ability to host both season long pick and race by race styles of pools. Using their site saves you hours of work tracking picks, updating your pool and sending out results. They take care of everything for you. If you are looking for something different this season, give NASCAR Pools Online a look.

If you do not want to play in a season long league and you just want an opportunity to pick a team and try to win some money each week, DFS (Daily Fantasy Sports) may be for you. Two sites that host DFS games for NASCAR include DraftKings and FanDuel. Their sites can be found at (https://www.draftkings.com/lobby#/NAS) and (https://www.fanduel.com/contests).

DraftKings and FanDuel are not the same. DraftKings hosts contests for the Cup Series, Xfinity Series and the Truck Series. FanDuel only offered contests for the Cup Series (We will see if they add the other two series in 2020. I also found that your chances of winning on FanDuel are better than on DraftKings because the pricing of the drivers is not as tight (meaning you can fit more top-level drivers into your lineup) and the competition is not as difficult (more of the Fantasy NASCAR experts spend most of their money on DraftKings).

My picks have won a lot of money on each site. If you feel like dipping your toe into the DFS waters in 2020, make sure you get a Premium Membership so I can navigate you through the sharks in the water.