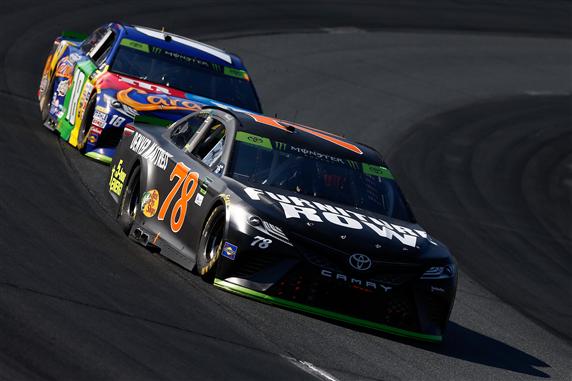 The Monster Energy NASCAR Cup Series competes at Charlotte Motor Speedway this week. This is the first race of the Round of 12 in the 2017 NASCAR Playoffs. The race can be seen Sunday at 2pm ET on NBC Sports Network.

My Yahoo Fantasy Auto Racing picks rebounded nicely at Dover after a lot of bad luck at New Hampshire. My team scored 380 points and moved up to the top 98% (8,352 points). I still have seven weeks to get into the top 99% for the sixth consecutive season. I plan to get it done.

I wrote in my article last week that I have a plan to get my picks through the final race at Homestead. Last week I stuck to the plan and everything is still on track. Just remember, sometimes I may have to use drivers who finish a little lower in the race because you cannot use Martin Truex Jr., Kyle Busch and Kyle Larson every week. I will do my best to give our teams the best chance to score the maximum points in the final seven races.

The two best choices for Group A are Martin Truex Jr. and Kyle Busch. These two drivers dominated the May race at Charlotte and they will likely do it again Sunday. Since this is the best track for Truex I will go ahead and burn one of my allocations with him this week. Busch has been on fire in qualifying trim so he will get the second spot on my team.

If you are out of allocations with Martin Truex Jr. and Kyle Busch I would recommend their Toyota teammates. Matt Kenseth would be my first choice followed by Denny Hamlin. Both drivers have been fast at the 1.5-mile tracks and they should easily crack the top 10 Sunday.

My allocation saver pick this week is Jimmie Johnson. This is one of his best tracks. He has eight wins at Charlotte and he races very well in the fall. Johnson came two laps away from winning the Coca-Cola 600 on fuel strategy. I expect the No. 48 car to be fast enough to run in the top 10 and Chad Knaus to use strategy to get Johnson inside the top five.

Martin Truex Jr. (3) is the driver to beat at Charlotte. No driver has dominated a track the way Truex has dominated Charlotte the last two seasons. The No. 78 car has led 625 laps in the last three races at the track. He has finished four of the last five races at Charlotte in the top five. Truex has been the master at the 1.5-mile tracks this season. He won at Las Vegas, Kansas, Kentucky and Chicago. He is my pick to go to Victory Lane Sunday. I am not afraid to use an allocation with Truex Sunday.

Kyle Busch (1) will be my second driver in Group A. I will start the No. 78 car even if Martin Truex Jr. is forced to drive a dump truck in the race. He is still good enough to win. Since I know I will start Truex in the race I need a driver for qualifying points. No one is better than Busch right now. He has won eight poles this season and he has started on the front row in every race in the playoffs. I would be surprised if he does not qualify in the top 4 Friday.

Group B is going to be difficult this week. I would be great if I could just throw Kyle Larson and Chase Elliott into my lineup and call it a day, but I need to save them for other tracks. I am sticking to my plan this week and going with two Stewart-Haas Racing and two Richard Childress Racing cars this week. I am sure I will be able to get two good drivers from this list for the race Sunday.

*I am out of allocations with Ryan Blaney. He has been very good on the 1.5-mile tracks. If you have two or more allocations with Blaney, I suggest using him instead n Austin Dillon this week. Just make sure you have an allocation left for Kansas. That is his best track.

Kurt Busch (1) will be one of my drivers in the race Sunday. Charlotte is his second-best track (behind Atlanta). Busch has finished the last five races at Charlotte in the top eight. He qualified 12th and finished sixth in the Coca-Cola 600. His average running position in the race was 4th best. I only have one allocation left with Busch and this is the best race to use. I plan to have the No. 41 car in my starting lineup Sunday.

Ryan Newman (6) is in my lineup because of his stats at Charlotte. The No. 31 car does not have the speed to run in the top 10, but Newman always seems to find a way to get to the front at the end of the race. Newman has the fourth-best average finishing position in the last six races at the track. Newman finished 9th in the Coca-Cola 600 and 4th in this race last year. I do not expect his average running position to be in the top 10, but I expect Newman to be there when the checkered-flag is waived Sunday. He should finish in the top 12 Sunday and that would be good enough if I am able to save allocations with my top drivers.

Austin Dillon (6) won the last race at Charlotte but that does not necessarily mean he will be in the top 10 Sunday. It has to help his confidence though and that can mean a lot to a driver. Charlotte is the best 1.5- mile track for Dillon. He has finished three of the last four races in the top 12. Most fantasy NASCAR players will take a 12th-place finish from Dillon this week. I am selecting Dillon for my team and will decide with Richard Childress Racing car is best for the race this week.

Clint Bowyer (3) gets the second spot on my team this week. I thought about going with Kyle Larson or Chase Elliott for qualifying points but I thought it would be a better idea to add another driver to my team that I can use in the race. Bowyer has been good but not great at the 1.5-mile tracks this season. He usually finishes between positions 12-15. He did have the ninth0best average running position in the May race at Charlotte so I am hoping the No. 14 team brings some speed to the track this week.

My Group C drivers are in bad shape but I have a plan to get my picks to the end of the season. I only have one allocation left with Erik Jones, Daniel Suarez and Ty Dillon. I will use these three drivers at their best tracks and Charlotte is not one of them. I will use Michael McDowell and probably give up 6-10 position points. You need to sacrifice at some time and this is a long race which gives McDowell a chance.

I you have two or more allocations with Erik Jones or Daniel Suarez I would use them instead of Michael McDowell (Erik Jones would be my top choice).

Michael McDowell (5) will be my starter this week. He probably will not qualify inside the top 25 but I am not worried about it. The No. 95 team always races better then they qualify. McDowell has been good at Charlotte since Leavine Family Racing started to receive engines from Richard Childress Racing. McDowell finished 19th in the Coca-Cola 600 and 14th in this race last year. I will be happy if he finishes in the top 20 Sunday.

Erik Jones (1) will be on my team for qualifying points only this week. Jones qualified 5th for the Coca-Cola 600 in May and he has been pretty good at starting up front at the 1.5-mile tracks. I will add him to the team and hopefully his Toyota powered car can get him a top-four starting spot and my team some bonus points.