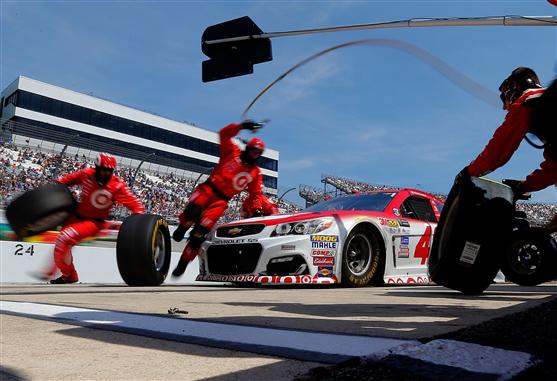 The Monster Energy NASCAR Cup Series competes at Dover International Speedway this week. This is the third and final race of the Round of 16 in the 2017 NASCAR Playoffs. The race can be seen Sunday at 2pm ET on NBC Sports Network.

My Yahoo Fantasy Auto Racing picks were killed by a wreck that took out Kurt Busch. My team scored 220 points and I dropped to the top 97% (7,972 points). I still have eight weeks to get into the top 99% for the sixth consecutive season. I plan to get it done.

I looked at all of the stats for the drivers this season and the last four years to map out which tracks will be the best to use each driver. If you have been following my picks all season I ask you to please trust the process. There will be times when I will sit great drivers on the bench to get a top 10 from a driver I may not use as much. It is more important to use your allocations wisely now then it is to select a driver who may finish a few places higher in the race.

When I mapped out the remaining eight races I was able to get through Group A with Martin Truex Jr., Kyle Busch, Kevin Harvick and Jimmie Johnson as my drivers. In Group B I am able to make it to the end by only using Kyle Larson, Chase Elliott, Kurt Busch, Clint Bowyer, Jamie McMurray, Ryan Newman and Kasey Kahne (I am out of allocations with Ryan Blaney). Group C will be tough but I will rely on Erik Jones, Daniel Suarez, Ty Dillon and Michael McDowell to get me to the end. Trust me, I have a plan!

The two best choices for Group A are Martin Truex Jr. and Kyle Busch. They have the best chance to win the pole, lead the most laps and finish in the top three. I will not be using either of these drivers in my starting lineup this week. They have an advantage over the field at the Monster Mile, but their advantage is greater at the 1.5-mile tracks. I will save these drivers for the tracks where aero-dynamics and horsepower separates the field more.

Jimmie Johnson (9) has won 11 races at Dover and Monday on SiriusXM NASCAR channel crew chief Chad Knaus said, “I am very confident that we can go to Dover and win the race. We are bringing the car to the track that won the last race and we believe it will be faster this week. Heck, Jimmie can win at Dover while driving a Chevy Tahoe!” When I mapped out my allocations for the rest of the season I have the No. 48 car as my starter for Dover. The No. 48 may not qualify as well or lead as many laps as the No. 78 or No. 18 cars but Johnson should be a lock for a top-five finish. I will take that and save an allocation with the Martin Truex Jr. and Kyle Busch.

Kyle Busch (1) will be my second driver in Group A. I will start the No. 48 car even if Jimmie Johnson crashes his car in practice and starts from the back. So I needed a driver for qualifying points and it came down to Martin Truex Jr. or Busch. The No. 18 car won the pole for the last race at Dover. Busch has won 8 poles this season, including the last two races. Remember, you do not lose an allocation unless you start the driver in the race. I will take the 10 bonus points from Busch (if he wins the pole), a top-five finish from Johnson and save my allocations with the No. 78 and No. 18 cars this week.

I am going with two of my top drivers in Group B. When I mapped out my Group B allocations I had Kyle Larson and Chase Elliott penciled in for Dover. These two drivers are almost a lock to run up front. The two drivers I pair with the No. 42 and No. 24 are drivers who have had success at Dover before (Kasey Kahne and Ryan Newman). If the No. 5 or No. 31 cars qualify in the top five and turn fast laps in practice I will not hesitate to use them in the race. It will be a huge bonus to my end of the season plan if Kahne and Newman run well. My plan right now though is to use the No. 42 and No. 24 in the race.

Kyle Larson (2) is my pick to win Sunday. He dominated the last race at Dover and he could easily do it again this week. Larson qualified 5th and led 241 laps on his way to a 2nd-place finish. Larson has an average finishing position of 5.5 at the track (not counting the race last year where he was running up front and had a mechanical issue). I am sure Larson would love to make a statement to Martin Truex Jr. and Kyle Busch this week just to say… “Don’t forget about me.” He has two wins and four finishes in the top five in his last six races. I am not worried about using one of my last allocations with Larson Sunday.

Chase Elliott (3) is at his best at Dover. Statically the Monster Mile is his 2nd-best track (Behind Chicago). Elliott has run three races in the MENCS at Dover and he has never finished outside the top five. His average finishing position is 3.6 at the track. You will not find a better track remaining on the schedule to use Elliott so you should have him in your lineups this week.

Ryan Newman (6) has the second-most wins at Dover behind Jimmie Johnson. He also finished 4th in the June race at the Monster Mile. Newman needs a good run Sunday to advance to the Round of 12. I doubt he will have the speed to crack my starting lineup but you never know with this team. I would rather go with a veteran who has been in a “must win” situation many times over a young driver who has the same pressure to get to Victory Lane Sunday.

Kasey Kahne (8) by the numbers should run well this week. Dover has historically been the best track for Hendrick Motorsports. Kahne has the 5th best average finishing position in the last five races at the Monster Mile. He was running in the top 10 in June when he was caught up in Ty Dillon and Erik Jones’ wreck. Kahne is also in a “must win” situation. I like his new crew chief (Darian Grubb) a lot more than I like Kahne, so this pick is mostly because I believe his team will give Kahne a car fast enough to run in the top 10 Sunday. Now, can he get the job done? I will take a chance on Kahne this week and if he looks good in practice I “may” use him. If not, I like my choices listed above.

I am not holding anything back in Group C this week. Daniel Saurez and Erik Jones were not only the best drivers from the group in the June race at Dover; they were also two of the best drivers in the field. When I mapped out my Group C picks for the final eight races I have Daniel Suarez in this spot. This is his best track so I am not worried about using my final allocation with him.

Daniel Suarez (2) will have a good chance to finish in the top five for the 2nd time this season (His first top 5 was at Watkins Glen). Suarez has done a great job at improving when the series competes at a track for the second time. Suarez qualified 3rd and finished 6th in his first race at the Monster Mile. He should easily finish in the top 10 Sunday. I only have two allocations left with the No. 19 car and I am not afraid to burn one of them Sunday.

Erik Jones (1) will be on my team for qualifying points only this week. I have enough faith in the No. 19 team that I know I can use Jones for qualifying and not have to worry about burning my last allocation with him. Jones qualified 7th in the June race and he won the pole for the Xfinity Series race at Dover last year. The Toyota’s have been fast so I will have Jones on the team and hope he starts in the top four this week.