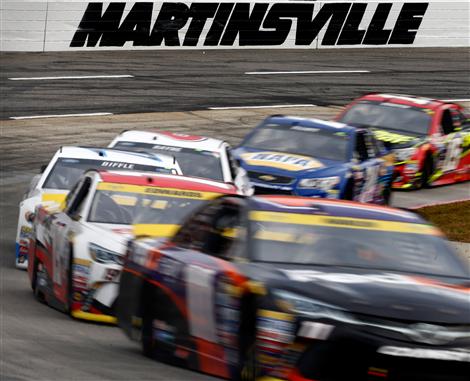 The Monster Energy NASCAR Cup Series competes at Martinsville Speedway this week. This is the first race in the Round of 8. The race can be seen Sunday at 2pm ET on NBC Sports Network.

The race last week at Kansas did not go as planned. It was great that I was able to use Harvick and save my last two allocations with Martin Truex Jr. for Texas and Homestead. I really hated how Jamie McMurray and Daniel Suarez crashed out of the race. I used my last allocations with these drivers and I wish I had them back. At least the Fantasy Gods owe me one now.

The schedule for the MENCS is crazy this week. There will be no track activity for the MENCS Friday. The series will have two practices Saturday (1st Practice at 11:30am ET and 2nd Practice at 4pm ET). I will have my Garage Talk Notes posted after the 4pm practice.

The MENCS will qualify the cars at 12pm ET (Noon) on Sunday and the race will begin at 3pm ET. This will not give me a lot of time to make my picks. I will not be able to break down the drivers for each group for the First Data 500. I will simply be posting my picks and posting my Top 40 Driver Rankings for the race. If you need to know which driver I like the best, simply look at the rankings. You can also ask me any questions you may have in the forum. This is only for one week and then we will be back to a normal schedule at Texas.

Kyle Busch (1) is my pick to win Sunday. He lost a lot of his momentum in the last round of the playoffs but Martinsville is the perfect track for him to regain his form. Busch should have won the last race at Martinsville. He had the most dominant car. He led 274 of the 500 laps and finished second. Busch has not finished outside the top 5 at Martinsville since 2014. He seems motivated to win another championship and I expect Busch to be the first driver to punch his ticket to the final four at Homestead. This is my final allocation with Busch and I am not afraid to use it.

Denny Hamlin (5) is my second pick this week. I am planning to use Kyle Busch in the race so I will use Hamlin for qualifying points. He qualified in the top 3 at the last two short-flat tracks (2nd at Richmond and 3rd at Loudon). He also won the pole at Charlotte and qualified 4th last week at Kansas. The No. 11 car has speed and Hamlin knows how to qualify up front. If I have to use him in the race I will be in good shape. Hamlin has won five Grandfather Clocks in his career.

I am out of allocations with Ryan Blaney, Kurt Busch and Jamie McMurray. I would consider Blaney or McMurray over Ryan Newman and AJ Allmendinger if I could. I still feel very confident in my picks this week.

Chase Elliott (2) was very good in the April race at Martinsville. He qualified 2nd, led 20 laps and finished 3rd. He said he sat down with Jeff Gordon before the last race at the track to figure out how to get around the paperclip. Gordon has 9 wins at the track so there are few better drivers to get advice from. Elliott is still alive in the playoffs and I think that matters. The No. 24 has been one of the hottest teams in the playoffs and I doubt they cool down this week. I want to save him for Texas and Phoenix but if he runs in the top 5 in practice I will have him in my lineup Sunday.

Clint Bowyer (3) does not have great stats at Martinsville but that has more to do with the cars he was driving then his ability to get around the track. Bowyer finished 5 of his 7 races with Michael Waltrip Racing at Martinsville in the top 10. He went into a slump when he drove for HScott Motorsports and then rebounded with a 7th-place finish in his first race with Stewart-Haas Racing. This is the perfect track for Bowyer’s aggressive driving style. I expect him to push his way to the front Sunday.

Ryan Newman (5) is another driver who performs well at Martinsville. Martinsville is one of the hardest tracks to pass at and Newman is the hardest driver to pass in the sport. He has finished 4 of the last 6 races at the track in the top 10. If he gets some track position Sunday it will be hard to take it away from the No. 31 car.  I will have to see how he looks in practice before I decide to use him in the race.

AJ Allmendinger (7) is my sleeper pick this week. Everyone considers Allmendinger one of the top drivers on the road courses but few people remember how good he is at Martinsville. The paperclip-shaped track requires drivers to properly use their brakes. No one does it better than Allmendinger. If you take away his DNF in 2014 when his engine expired, Allmendinger has an average finishing position of 8.1 in his last 6 races at the track. Allmendinger finished 6th in the April race and he is a great pick for your fantasy team this week.

I am sure most of you feel the same way I do. I am out of allocations with Daniel Suarez and I only have one allocation left with Erik Jones and Ty Dillon. I have a plan for the final four races and I think it will work out.

There are always a lot of beating and banging at Martinsville. Many drivers get spun out and there is usually a big crash at the end of the fall race. For this reason I do not want to use my final allocation with Erik Jones. I will save him for a more predictable track.

Michael McDowell (3) has really been running well this year for a team as low funded as Leavine Family Racing. They finished 18th last week at Kansas and 16th on the last short flat track at Richmond. I am hoping McDowell can find his way to the front at the end of the race Sunday. McDowell started 30th and finished 18th in this race last year. I will gladly take a top-20 finish from him Sunday.

Ty Dillon (1) tested at Martinsville two weeks ago. He should show up Saturday with a lot of speed. Dillon only has one career race in the MENCS at Martinsville. He qualified 23rd and finished 22nd. I really want to save my last allocation with him but if he looks fast and McDowell struggles in practice, I will not be afraid to pull the trigger.

I will post my final picks for Yahoo Fantasy Auto Racing after qualifying Sunday.