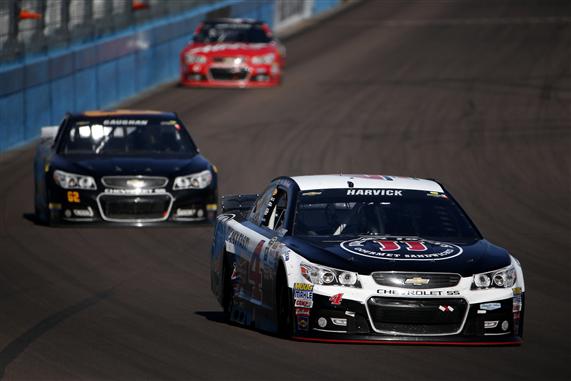 The Monster Energy NASCAR Cup Series competes at Phoenix Raceway this week. This is the last race in the Round of 8. Five drivers will be racing for one spot in the Final Four at Homestead. It will be fun to see which driver prevails this week. The race can be seen Sunday at 2:30 pm ET on NBC Sports Network.

My Yahoo Fantasy Auto Racing picks for Texas were red hot. I scored 350 points and moved up to the top 97% (9,657 points). My streak of six consecutive seasons in the top 99% is in serious jeopardy. I will need two more 350 point races in order to have a chance. That is what I plan to do!

Kevin Harvick (5) has been the most dominant car at Phoenix since the track was repaved and reconfigured. Harvick has won 6 of the last 10 races at the track and he has an average finishing position of 2.1 in the last 8 races at the track. I would like Harvick a lot more if did not win last week. I still think he will drive hard to win the race and prevent another Toyota or Jimmie Johnson from making it to the Final Four at Homestead. It is too risky to fade Harvick this week so I will have him on my team.

Denny Hamlin (7) is my second pick for Group A. I wanted to select a driver who has a lot to race for and Hamlin falls into that category. My choice for the last pick in this group came down to Brad Keselowski or Hamlin. I went with the No. 11 car because he has had more speed I the playoffs and he has run better than Keselowski on the flat tracks in 2017. I am sure Martin Truex Jr., Kyle Busch and Matt Kenseth will all be helping Hamlin make it 3 Toyotas in the Final Four. I would be surprised if he did not run up front Sunday.

* I am out of allocations with Kyle Busch. I would use Busch over Denny Hamlin if I could.

Kyle Larson (1) really looked deflated after his crash at Texas. The No. 42 team has three DNFs in a row. They really do not want to go into the 2018 season in a slump after they had such a great season. Larson needs a good race to turn things around and trip to Phoenix may be what the crew chief ordered. Larson finished 3rd in this race last year and 2nd in March. He had one of the fastest cars in both races. I expect Larson to be fast again Sunday. I want to save him for Homestead but I will have the No. 42 on my team for qualifying points and just in case he dominates the field in practice.

Chase Elliott (1) will be the driver I am cheering for Sunday. I would love to see “The People’s Champion” in the Final Four at Homestead. He will have to win the race to get the job done. Hendrick Motorsports has always been good at Phoenix. I expect the No. 24 team to bring a fast car to the track Sunday. Elliott led the second-most laps in the last race at Phoenix (106) and he ran well here last year. Elliott is a lot better at Phoenix then he is at Homestead so I plan to have him in my starting lineup this week.

Clint Bowyer (2) gets a spot on my team over Kasey Kahne and Ricky Stenhouse Jr. All three drivers are really close but I like the speed the Stewart-Haas Racing cars have right now. Bowyer had some bad luck with an engine last week so that could scare some teams away. I will give him another chance. Bowyer has the 7th-best average running position on the flat tracks this year. He finished 3rd at Martinsville two weeks ago and I expect the No. 14 to be fast again in the desert.

Ryan Newman (4) won the last race at Phoenix but he did not have a dominant car. Newman was running 7th when the caution flag came out. The six cars in front of him pitted for new tires and Newman stayed out and won the race. Whenever a driver returns as the defending race champion it puts a bounce in their step. I know Newman did not dominate the race but I expect a little extra mojo for this team Sunday. The No. 31 car is a good insurance plan to have on your team this week. Newman has a habit is piling up top-10 finish at Phoenix.

* I am out of allocations with Ryan Blaney, Jamie McMurray and Kurt Busch. I would use all of these drivers over Clint Bowyer or Ryan Newman if I could.

Michael McDowell (2) returns home this week and I need a solid race from the Phoenix, Arizona native. McDowell grew up racing on this track but you would not know it by looking at his results. His best finish at Phoenix came in March when he finished 24th. The No. 95 team is running a lot better than they were earlier in the season. I will be happy if I can get a top-20 finish out of McDowell this week.

Ty Dillon (1) has a lot better stats at Phoenix than Michael McDowell so he is probably the driver I will be using in the race. Dillon finished 16th at Phoenix in March and 15th in this race last year. The No. 13 team is usually slow in practice and qualifies outside the top 25. The team has consistently found speed on race day and that is what matters. I wish I had Erik Jones or Daniel Suarez left but I feel confident that Dillon can get me a top-20 finish Sunday.

* I am out of allocations with Daniel Suarez and Erik Jones. I would use both of these drivers over Michael McDowell and Ty Dillon if I could.

I will post my final picks for Yahoo Fantasy Auto Racing after final practice Sunday.