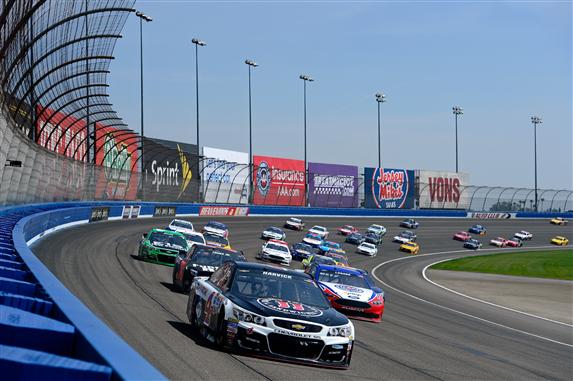 The Monster Energy NASCAR Cup Series travels to Fontana, California this week for the Auto Club 400. The race can be seen Sunday at 3:30 p.m. ET on Fox Sports 1. Be sure to test your fantasy NASCAR skills in the Yahoo Fantasy Auto Racing game.

There are many metrics to use to select your fantasy team each week. Most people look at a driver’s stats at the particular track. Others think it is a popularity contest and just choose the most popular driver. I believe momentum is more important in NASCAR than it is in most other sports. For this reason I like to select the drivers who are on a hot streak.

Most fantasy players get too caught up in saving drivers since the Yahoo Fantasy Auto Racing game restricts the number of times you can use a driver throughout the season. How did it work out saving Chase Elliott or Martin Truex Jr. until the Chase started last year? Probably not well since other options became available in Group C and Truex cooled down the stretch.

Saving your allocations with Chase Elliott, Kyle Larson and Erik Jones sounds like a good idea but I would advise against it. These three drivers are at the top of their game right now. They may run this well all season but history suggests they will cool off. We know for a fact they are on fire now, so why not play them know because we know the competition will catch up to them later in the season.

There are five drivers I would consider from Group A this week. Jimmie Johnson and Kevin Harvick have the best stats at Auto Club Speedway. Both of these drivers should be good in their home state. Team Penske has been consistently fast this season. Brad Keselowski and Joey Logano should have a good shot at the pole and both should run well in the race Sunday. Martin Truex Jr. has dominated most of the intermediate tracks the last year. His stats at Auto club Speedway are not great but he should still be considered.

Harvick will be my exception to the “Play the hot hand” rule this week. His stats at Auto Club Speedway are incredible and he has run well this season, but he has had some bad luck. Harvick has a series-best driver ranking, series-best average finishing position and the most laps led in the last two races in Fontana. He qualified second for both races and finished second in both races in 2016. Harvick loves running well in front of the California fans. The No. 4 car will be fast Sunday.

I thought about going with Jimmie Johnson in this spot but Keselowski is running too well right now to ignore. He has finished the last three races (Atlanta, Las Vegas and Phoenix) in the top five. I expect this track to run similar to what we saw at Atlanta (Keselowski won at Atlanta). Keselowski won the race at Auto Club in 2015 and he will be a serious threat to win again this week.

There are eight drivers battling for the four spots on my team this week. Kyle Larson and Chase Elliott are not only the best drivers in Group B; they are also two of the best drivers in NASCAR. Jamie McMurray, Ryan Newman, Clint Bowyer and Kasey Kahne are four veteran drivers who found their mojo this year. Ryan Blaney has had a lot of speed in 2017 but his points do not reflect how well his has run this season. Ricky Stenhouse Jr. is my sleeper pick this week. He finished fourth last week and he finished fifth in this race last year. Stenhouse is worth a shot if you want to save allocations with other drivers.

Larson is arguably the best driver in the sport right now. He has three consecutive second-place finishes and his average finishing position in the last five non-Superspeedway races is 2.2. The new aerodynamics package suites his driving style perfectly. The track most similar to Auto Club is Michigan. The Cup Series used the new aerodynamics package at that race and Larson scored his first win. He is my pick to go to Victory Lane Sunday.

McMurray is being overlooked this season because of how well his teammate (Kyle Larson) is running. McMurray is also off to a good start in 2017. He has qualified in the top 10 in all of the races and he has an average finishing position of 11th at the downforce tracks. McMurray qualified 10th and finished 10th at Auto Club Speedway last season. Fantasy teams should expect similar results from the No. 1 team this week.

The last choice for Group B was difficult. All of the stats say to go with Kurt Busch, but I think I will wait until they get their battery problems fixed before I select the No. 41 car again. Ryan Newman will have a lot of momentum after winning in Phoenix. It is not like he dominated the race though, so I will chalk that up as being more lucky than good. Ryan Blaney is the most likely driver to qualify in the top four this week, but I doubt he finishes in the top 10. I went with the safest pick, Kasey Kahne.

Kahne has been the best of the group on the intermediate tracks since the Chase began last year. He has finished in the top 10 in seven of the last nine races on 1.5 or 2-mile tracks. This tracks suites Kahne’s driving style well. He can run the top or bottom, whichever is best for his car. The No. 5 car should make it eight finishes in the top 10 in the last 10 races.

Three drivers have dominated Group C this season and fantasy teams need to continue to use these drivers until their allocations are out. Erik Jones, Daniel Suarez and Ty Dillon have all had good races this season. Jones has been the best of the three so it is smart to pair him with either Suarez or Dillon. The No. 19 and No. 13 cars are only separated by two points this season so you cannot go wrong with either driver.

Jones has been a great Group C driver this season and I plan to keep using him because Daniel Suarez and Ty Dillon should get better later in the season. Jones is the only driver from this group who has scored over 200 points in Yahoo Fantasy Auto Racing. He finished 14th at Atlanta, 15th at Las Vegas and eighth last week at Phoenix. The No. 77 car should easily finish in the top 15 Sunday.

Daniel Suarez vs. Dillon was another tough call this week. Neither driver has any experience in a Cup Series race at Auto Club Speedway. The reasons why I went with Dillon over Suarez is because Dillon will compete in the Xfinity Series race Saturday. He should gain some knowledge in that race since the cars and tires are similar. Also, Dillon ran a couple of races in the Cup Series at Michigan. He should be able to use that experience in the race at Auto Club Speedway.