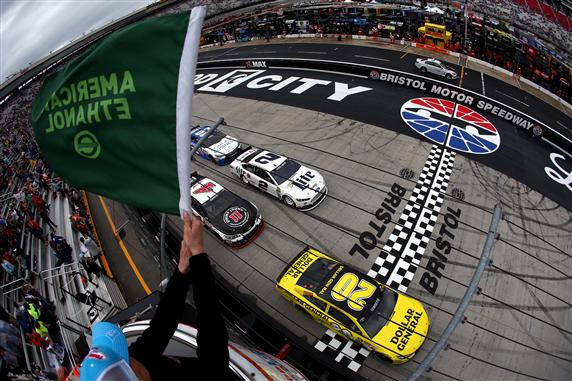 The Monster Energy NASCAR Cup Series travels to Bristol, Tennessee this week for the Food City 500. The race can be seen Sunday at 2 p.m. ET on Fox. Be sure to test your fantasy NASCAR skills in the Yahoo Fantasy Auto Racing game.

The Monster Energy NASCAR Cup Series will be back to short track racing this week. The race at Bristol is the Royal Rumble of the Cup Series schedule. There will be a lot a beating and banging between cars and the last one standing usually wins the race.

Races at Bristol are becoming as risky as races on the Superspeedways for fantasy teams. The cars turn 15 second laps and there is nowhere to hide when someone gets spun out. Many of the good drivers get caught up in wrecks that they have nothing to do with. I plan to save my top drivers (Brad Keselowski, Chase Elliott, Kyle Larson and Erik Jones) for more predictable tacks.

All of the drivers in Group A have had some success at Bristol. I am only considering three drivers for my team. Joey Logano is the safest play because of his success this season and his success at Bristol. The last pick comes down to Kevin Harvick or Kyle Busch. Harvick is the safer pick but Busch has more upside. I decided to go with Busch because I only have seven allocations left with Harvick and I know I will use him at the 1.5-mile tracks and Phoenix.

Busch is the best driver in the series at Bristol if they ran 400 miles instead of 500 miles. Busch has a series-high five wins and a series-high 1,959 laps led at Bristol. The problem is that his aggressive driving style often gets him into trouble at the end of the race. Busch is truly a “checkers of wreckers” type driver at Bristol. Joe Gibbs Racing is desperate for a win so I think it will be checkers for Busch Sunday.

My plan for the Food City 500 is to give Kyle Larson and Chase Elliott the week off. Both of these drivers will have a great chance to win Sunday but this race is too unpredictable to use an allocation with two of the best drivers in the sport. Usually the spring races at Bristol come down to which drivers were able to survive the wrecks that take out half the field. I will use Larson and Elliott at the more predictable 1.5-mile tracks.

Bowyer has been running very well this season. He has finished every race since the Daytona 500 in the top 13. He should easily finish in the top 10 this week. Bowyer ran well at Bristol even when he was driving for underfunded teams. Bowyer started 36th and finished 8th in this race last year while driving for HScott Motorsports. It would not surprise me if Bowyer won this week in his Stewart-Haas Racing Ford.

Busch grew up racing on the Bull-Ring track in Las Vegas. The track is similar to Bristol so it should not surprise people that Busch is very good in Thunder Valley. Busch has a series-high five wins and 1,062 laps led on the high-banked short track. He started 26th and finished third in this race last year. I expect similar results for the No. 41 team Sunday.

McMurray has been running well this season and I am going to keep using him until he cools off. I do not think the No. 1 team will be able to sustain this success for the entire season. McMurray has run good but not great at Bristol. He finished his last five races in the top 14. McMurray should be able to run in the top 10 this week.

Stenhouse Jr. should be on every team this week. There are few good opportunities to use and allocation with Stenhouse and this week is one of them. This is by far the best track for Stenhouse. He has an average finishing position of 10.6 at Bristol in his career. Last year he started 25th and finished second. Roush Fenway Racing has been running well this season so Stenhouse should be considered a sneaky pick to go to Victory Lane Sunday.

There are four good choices in Group C this week. Erik Jones, Daniel Suarez, Ty Dillon and Matt Dibenedetto are the only drivers with a realistic chance of a top 15 finish at Bristol. Jones and Suarez have never competed in a Cup Series race at Bristol so they are risky picks. Dillon has experience but has not finish inside the top 20. Dibenedetto is the best pick if you want to be contrarian this week. He had an average finishing position of 11.5 in his two races at the track last year.

Dillon has something that Erik Jones and Daniel Suarez do not have this week… experience in the Cup Series at Bristol. Dillon qualified 34th and finished 25th in this race last year while filling in for Tony Stewart. Dillon is running better than he did in 2016. I expect him to qualify and finish inside the top 20 this week.

My plan this week is to use Jones for qualifying points only. He has never competed in a Cup Series race at Bristol but Jones has four races at the track on his Xfinity Series. Jones won the pole for three of his four races in the lower series. Jones should be able to earn bonus points for qualifying if Furniture Row Racing provides him a car with some speed. I plan to save my allocation with him and start Ty Dillon in the race.