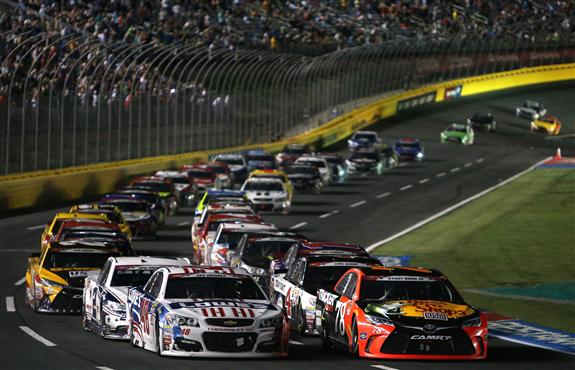 The Monster Energy NASCAR Cup Series travels to Concord, North Carolina this week for the Coca-Cola 600. The race can be seen Sunday night at 6 p.m. ET on Fox. Be sure to test your fantasy NASCAR skills in the Yahoo Fantasy Auto Racing game.

The Cup Series has competed on four 1.5-mile tracks this season (Atlanta, Las Vegas, Texas and Kansas). The drivers who finished up front in these races should be fast at Charlotte. Be sure to check out which driver’s performed well at these tracks in my Yahoo Fantasy Auto Racing Intermediate Track Points article.

Allocations are starting to become more and more valuable as we get deep into the schedule. The Coca-Cola 600 is not a normal intermediate track race. The length of the race often allows for some drivers who usually do not finish up front to have a solid race Sunday night. It may not be a bad idea to take some risk this week if you want to have different lineup than your competition.

There are four really good choices in Group A this week. Martin Truex Jr. should be on every team because he dominated this race last season and the No. 78 car has been the best on 1.5-mile tracks over the last year. Kevin Harvick has not been as good on the 1.5-mile tracks as he has been the last two seasons but the team is showing signs of improvement. Brad Keselowski and Jimmie Johnson will have the best chance to challenge Truex for the win Sunday night. Their teams are very good at working on their cars and getting them to the front at the end of the race.

The stats suggest Joey Logano should be a good pick this week as well. The No. 22 team had problems with brakes at Kansas and then the problems continued last week in the All-Star race. I will wait until they figure out what the issue is before I select Logano for my team.

Truex Jr. did not look very good in the All-Star race and that is good news for your fantasy team. Hopefully other players decided to leave the No. 78 car off their team. I think that will be a big mistake. Furniture Row Racing tweeted after the race that they missed the setup, but they will be ready to rock and roll Sunday night. I believe them.

The race Truex had in the Coca-Cola 600 last season was one of the most dominant races in NASCAR history. He won the pole and led 392 of the 400 laps on his way to Victory Lane. How can you ignore stats like that? Also, he is coming off a dominant win at Kansas. Truex is my pick to win the race this week.

I cannot imagine sitting Martin Truex Jr. on the bench for this race so I needed a driver who could score bonus points for qualifying as my second pick in Group A. Harvick is my choice.

Harvick won the pole for the last race at Charlotte and the No. 4 car has qualified in the top six in seven of the last nine races on 1.5-mile tracks. He also looked good in qualifying for the All-Star race. I should be in good shape if for some reason I have to use Harvick in the race. Harvick has finished three of the last five races at Charlotte in the top two. Harvick is the best driver to pair with Truex this week.

I had a hard time selecting my Group B drivers this week. There are nine drivers from this group who could easily finish in the top 10.

The stats suggest Chase Elliott should be in line for his first trip to Victory Lane this week. He finished eighth in this race last year. Elliott has three consecutive finishes outside the top 24 so I will wait until he heats up again before I select him for my team.

Kurt Busch and Kasey Kahne have a history of running well at Charlotte. Busch has finished five consecutive races at the track in the top 11. Kahne has three wins in the Coca-Cola 600 and he finished third in this race last year. Both drivers are excellent choices if you want to save allocations this week.

Roush Fenway Racing has stepped up their game this year. Trevor Bayne and Ricky Stenhouse Jr. have consistently finished in the top 15 on the 1.5-mile tracks. They both should have a good race Sunday night.

I decided to go with the four drivers who have the best stats on the 1.5-mile tracks this season.

I was really thinking about leaving Larson off my team this week and then he goes out and dominates the All-Star race. I am running low on allocations with the No. 42 car and I need to keep one for Homestead. I am hopping I do not have to use him this week, but I think I need to roster him just in case he wins the pole and dominates practice. Larson has a third-place average finish on the 1.5-mile tacks this season. He is just too good to ignore right now.

I said earlier in the season that I was going to use McMurray until he cooled off. I am still waiting…

McMurray has scored the fifth-most points in Yahoo Fantasy Auto Racing on the 1.5-mile tracks. He also has the seventh-best average running position. Those stats are Group A driver quality. The No. 1 car had the least fall-off on his tires last week. I am sure they will bring the same setup for the race Sunday night and McMurray should be very good on the long runs. If McMurray is going to win a race this season it should happen in the Coca-Cola 600.

The last pick for Group B came down to Kasey Kahne, Kurt Busch and Bowyer. Kahne and Busch have better stats at Charlotte than Bowyer, but this pick came down to trust. I do not trust Kahne or Busch because they have burned me so many times before. Bowyer has been one of the most consistent drivers on the 1.5-mile tracks this season so he gets the spot.

Bowyer has scored at least 70 points in every race on the 1.5-mile tracks. He has not finished worst than 11th on these tracks this season. The No. 14 car look great in the Monster Energy Open Race and he would have had a chance to finish up front in the All-Star race if they would not have tried to be cute and mix the green and yellow tires on the car. Bowyer is a safe pick Sunday night.

The question that must be answered this week for Group C is: Should you use Regan Smith and save an allocation with one of the top drivers from this group?

Fantasy players need 36 starts from their Group C drivers. You can get 27 starts from Erik Jones, Daniel Suarez and Ty Dillon. This means there are nine races to fill in. I plan to use Michael McDowell in all four restrictor-plate races and the two road course races. This only leaves me three races to fill in with other drivers.

We know Aric Almirola will be out of the car for at least 10 weeks. There will be plenty of time to use the replacement driver in the No. 43 car. Since the crew chief (Drew Blickensderfer) is suspended for the Coca-Cola 600 and this is the first race that Regan Smith will be behind the wheel, I will wait a week to see how Smith performs before I use him on my team. My plan is to use two drivers I know can finish in the top 15 Sunday.

I have been very impressed with the way Suarez has wheeled the No. 19 car at Kansas and in the All-Star race. Suarez is more of a Matt Kenseth type driver, while Erik Jones is more like Kyle Busch. That means Suarez likes to patiently work his way to the front while not out-running the tires. That type of racing works well in a 600 mile race. Jones likes to drive the wheels off the car like every lap is the last lap. Jones will be better for qualifying.

Regan Smith will be a popular pick this week. Let everyone else in your league use him and get a 20th – 25th place finish. There will be plenty of time to use the replacement drivers for the No. 43 car. Aric Almirola is not coming back any time soon. I will wait until the crew chief (Drew Blickensdefer) is back and Smith has more seat time with the team. The best options this week is Daniel Suarez for the race and Erik Jones for qualifying.

* NASCAR still has Aric Almirola listed on the official entry list. I assume it is Regan Smith in the car. If anything changes I will update the picks.