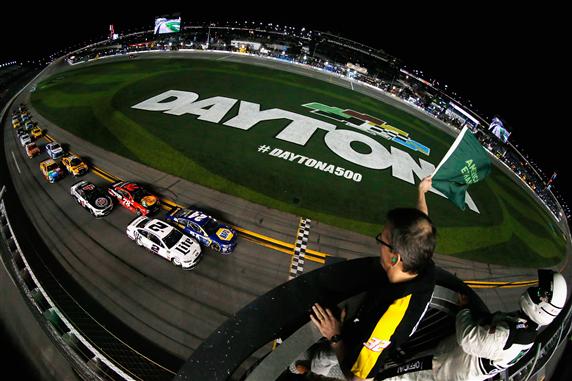 The Monster Energy NASCAR Cup Series travels to Daytona, Florida this week for the Coke Zero 400. The race can be seen Saturday night at 7:30 p.m. ET on NBC. Be sure to test your Fantasy NASCAR skills in the Yahoo Fantasy Auto Racing game.

It is back to restrictor-plate racing for the Monster Energy NASCAR Cup Series and that means it is time to save allocations in the Yahoo Fantasy Auto Racing game. This race is too unpredictable to use drivers like Martin Truex Jr., Kevin Harvick, Kyle Larson, Chase Elliott, Erik Jones or Daniel Suarez. I would only recommend adding these drivers for qualifying points only this week.

The story of the Daytona 500 was the Young Guns. Kyle Larson, Ryan Blaney, Chase Elliott, Austin Dillon and Joey Logano (Yes, I consider Logano young) were all running up front at the end of the race. The old veteran, Kurt Busch used his experience to beat them all to the checkered-flag. These young drivers know nothing else but to give it 100% all the time. I expect them to be up front Saturday night as well.

*Fantasy teams will get to see two practices Thursday before Yahoo Fantasy Auto Racing lineups lock early Friday morning. I will monitor the practices and post any changes to my picks Thursday night.

All the drivers in Group A have a history of running well at Daytona. It will be hard to go wrong with any of the choices. The only driver I would not recommend using is Martin Truex Jr. He will have a good chance to win the race Saturday night but his allocations should be used on the 1.5-mile tracks.

There are four drivers at the top of my list this week. Kevin Harvick is very consistent at Daytona but his allocations should be saved for the 1.5-mile tracks, Bristol and Phoenix. Brad Keselowski is a good restrictor-plate driver but he is much better at Talladega than he is at Daytona. Joey Logano is a must start because of his ability to win the pole and his consistency in finishing up front. The final pick came down to Denny Hamlin and Dale Earnhardt Jr. Hamlin is the safer pick but I believe magic will happen Saturday night.

NASCAR has a history of storybook endings. Jeff Gordon won at Richmond to make the Chase in his final season and Tony Stewart won at Sonoma to clinch a spot in the Chase before he retired last season. Could Earnhardt do the same? I think he can. Earnhardt had the second-best average running position and the fourth-best driver rating in the Daytona 500. He qualified 2nd so his car should have speed this week. I have had bad luck with Earnhardt this season but I will give him one more chance.

Logano is my backup plan to Earnhardt. He has been the most consistent driver at Daytona the last three seasons. He has a series-high 7.8 average finishing position and the third-best driver rating (94.7) at the track. Logano has finished four of the last five races at Daytona in the top six, including a win in the 2015 Daytona 500. The No. 22 car is one of the safest picks for your team this week.

It is more important to save allocations in Group B than it is to select the correct drivers for the race. I know that may sound like a dumb statement but this race is so unpredictable that it is better to have your top drivers at the more predictable tracks.

Kyle Larson and Chase Elliott can be used but only for qualifying points Friday. Both drivers should start up front but do not use them in the race.

Since any driver who starts the race has a good chance to finish up front, there is no bad choice in Group B. The best strategy is to try and eliminate your risk of having drivers who will end up in a crash at Daytona. I like to focus on drivers who have a history of finishing the races.

Busch won the Daytona 500 and he should be up front again this week. What was amazing about the win for Busch is that he did it without a rearview mirror in the car. That had to be incredibly difficult. Busch has been consistent at Daytona. He has finished four of the last five races at the track in the top 10 and Busch has completed 21 consecutive races at the track without an accident. The best way to be a great fantasy pick at Daytona is to stay out of trouble and that is what Busch will do for you this week.

Dillon is very good on the restrictor-plate tracks. Maybe it is the No. 3 car or maybe he learned something from his grandfather that Dale Earnhardt Sr. taught him. Whatever it is, the No. 3 car is very good at running up front at Daytona. Dillon has an average finishing position of 9.9 in his last seven races at the track. He has also completed every lap at Daytona in the No. 3 car. Dillon is a safe pick this week.

Stenhouse Jr. won the last restrictor-plate race at Talladega and he should be up front at Daytona. Last year Stenhouse qualified fourth and finished fifth in the summer race at Daytona. Fantasy teams should expect another top-10 finish from the No. 17 car this week. This would be a good race to use an allocation with Stenhouse.

Last week I used Kyle Larson for qualifying points only and it paid off. He won the pole and scored 10 bonus points for my team. I am using the same strategy with Elliott this week. The No. 24 car has won the pole for three of the last five races at Daytona. I am betting that Elliott will qualify in the top two again this week.

There are three drivers in Group C who you must get 9 allocations out of this season. Erik Jones, Daniel Suarez and Ty Dillon are the best drivers in this group and fantasy teams must use them wisely. I would not recommend using any of these drivers this week. Michael McDowell, Landon Cassill, David Ragan and Cole Whitt have enough success at this track to make them good picks this week.

McDowell has had a career season and he should be able to run well Saturday night. He has finished four of the last five races at Daytona in the top 15. That includes a top-10 finish in the Coke Zero 400 last season. McDowell is good at avoiding trouble in the restrictor-plate races and that makes him a good value pick this week.

There is no chance I will use Suarez in the race. Even if McDowell crashes in practice and goes to a backup car, I will still use the No. 95 Saturday night. Suarez is on the team for qualifying points only. There was a qualifying race for the Daytona 500 so that information cannot be used this week to determine how well a driver will qualify Friday. Suarez did start 7th at Talladega though. I only need him to move up three more positions to score qualifying points this week. The Joe Gibbs Racing engines are stronger now so I think he can improve.