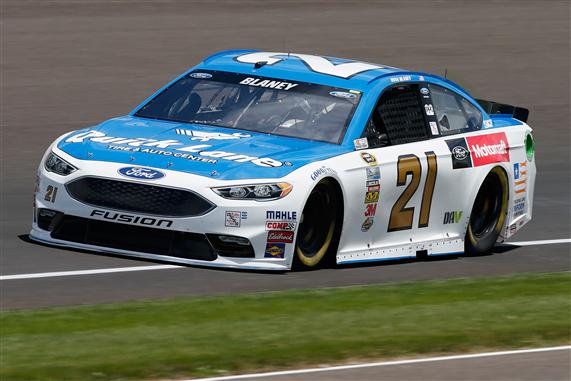 The Monster Energy NASCAR Cup Series travels to Speedway, Indiana this week for the Brickyard 400. The race can be Sunday at 3pm ET on NBC. Be sure to test your Fantasy NASCAR skills in the Yahoo Fantasy Auto Racing game.

The Brickyard is unlike any other track on the circuit. It is as big as Daytona, but the flat surface makes Indi race like Pocono. Usually the drivers who run well at Pocono will also run well at the Brickyard. Here are the results from the race last month at the Tricky Triangle: Pocono Results

The Yahoo Fantasy Auto Racing game restricts the number of times you can use a driver throughout the season. This is becoming a problem because two drivers continue to dominate the series. So the question is what should fantasy teams do with Martin Truex Jr. and Kyle Larson? They are by far the best drivers in their groups but fantasy teams cannot use them every week.

Fantasy teams need to keep at least four allocations with Martin Truex Jr. for the Playoffs. There is a great chance he will win the races at Charlotte, Kansas, Texas and Homestead. You are in good shape if you have four or more allocations left with Truex, but use them wisely the rest of the season.

Kyle Larson has also been good at every track. I would feel good if I had at least four allocations left with the No. 42 car. Larson must be used at Michigan and Homestead. He is by far the best driver at these tracks. I would also want to make sure I could use him at Dover and Phoenix. Larson finished second at these tracks this year and he had one of the best cars.

The rules for the Yahoo Fantasy Auto Racing game say that you can select a driver for your team and earn bonus points for qualifying. Fantasy teams will not lose an allocation with the driver if you do not use the driver in the race. This is a good week to take advantage of this rule.

Kyle Busch has been the best driver at the Brickyard the last two seasons. He is the favorite to win this week and almost a lock to start in my Group A lineup. I will pair Martin Truex Jr. with Busch since I know I am using Busch for the race. Truex has the best chance to win the pole and earn my team 10 bonus points. Since I will not start Truex in the race, I will not lose an allocation with the No. 78 car.

Three other drivers I would consider for Indianapolis include Kevin Harvick, Denny Hamlin and Matt Kenseth. Harvick finished second at Pocono and he has three consecutive top-eight finishes at the Brickyard. Hamlin will have momentum after winning at New Hampshire. He had the fastest car in the tire test at Indianapolis in April. Kenseth finished in the top 10 at Pocono and he has four consecutive top-seven finishes at the Brickyard. Both of these drivers should finish in the top five Sunday.

There are many drivers who are good at dominating race tracks. Martin Truex Jr. is a lock at Charlotte. Kevin Harvick is a guarantee top-five finisher at Phoenix and Kyle Larson is the favorite at all 2-mile ovals. Kyle Busch is a lock this week at the Brickyard.

Indianapolis is the best track for Rowdy. His last five finishes at the Brickyard are: 1st, 1st, 2nd, 10th and 2nd. Last year Busch had a perfect driver rating in the race (that is rarely done in NASCAR). He won the pole, led 149 of 170 laps and had a 1.4 average running position on his way to Victory Lane. He is the best pick in the game this week.

The best way to earn the maximum points in Group A is to find the driver who will dominate the race and end up in Victory Lane (Kyle Busch) and pair him with another driver who can earn bonus points for qualifying. That driver is Truex Jr.

Truex has earned qualifying points in 12 of 15 downforce races this season. He has qualified second in five of these races and won his first pole (thanks to Kyle Larson) last week. Kyle Busch should win the pole and Truex should qualify second this week. It has already happened three times this year, including the race at Pocono. The is no reason not to swing for the fences Sunday since Busch is such a good pick for Group A.

I am using the same strategy in Group B that I used in Group A this week. Kyle Larson is the best bet to qualify up front Friday so I will select him for my team. There is no way I will bourn an allocation with him in the race, but the bonus points for qualifying will come in handy the rest of the season (The No. 42 team just needs to past inspection).

Since I am using Larson for one spot on my team, I need to make sure I hit on the other three drivers. Ryan Blaney and Kurt Busch ran well at Pocono and that should translate into a top-10 finish Sunday. I have been saving Chase Elliott this season and this is a good week to use one of my allocations with the No. 24 car. He is starting to heat up after a slow start to the season.

Jamie McMurray and Clint Bowyer are good choices. I would use McMurray over Busch if I had more allocations but I am down to two starts with the No. 1 car. Bowyer finished 21st at the Brickyard last year while driving for HScott Motorsports. He should finish in the top 10 while driving for Stewart-Haas Racing.

If you need a sleeper driver this week, Paul Menard is your guy. He won this race in 2011 and he finished 6 of the last 7 races in the top 14. You will never get that kind of production from Menard at any other track. I just do not have the guts to pull the trigger on the No. 27 car Sunday.

Larson has been the best driver in the series at qualifying. He has won five poles this year (Auto Club, Martinsville, Bristol, Michigan and Sonoma). It would have been six poles if his car would have past post-qualifying inspection last week. I am confident that my other three drivers will perform well this week so I have no problem selecting Larson for qualifying points only at the Brickyard.

The people in the garage say that Pocono is the track that closely resembles Indianapolis. If this is true, Blaney should have a good chance to go to Victory Lane this week. He qualified fourth and led 10 laps on his way to his first career win at Pocono last month. This race always comes down to who has the most horsepower. The Wood Brothers are always good at providing their drivers with a fast racecar. It would be cool to see the legendary Wood Brothers Racing team in Victory Lane at the Brickyard.

Busch had one of his best races of the season at Pocono. He qualified fifth and finished fourth. I expect the No. 41 car to be fast again Sunday. Busch has had mixed results at the Brickyard. Since joining Stewart-Haas Racing he has an average finishing position of 17.3, but most of that is a result of his car running out of gas on the final lap in 2014. His average finishing position the last two seasons is 12th. Busch should run well this week since he finished in the top 10 at Pocono.

Indianapolis is not the best track for Elliott but I think he will be up front Sunday. Elliott has finished 15th and 18th in his two starts at the track. He finished eighth at Pocono last month. I expect another top-10 finish from him this week. Hendrick Motorsports has been good at the Brickyard. Their nine wins at the track lead all teams. Elliott will have the car and the skills to be in the top 10 at the end of the race this week.

Dillon is not running as well now as he was earlier in the season. I still think you need to give him a chance this week. He has never competed in a MENCS race at the Brickyard but he has four races at the track on his Xfinity Series resume. Dillon has only won one race in his Xfinity Series career. It came at Indianapolis in 2014. This has been one of Dillon’s best tracks. His average finishing position in the Xfinity Series is 5.5 at the Brickyard. The No. 13 car should be able to finish in the top 20 Sunday.