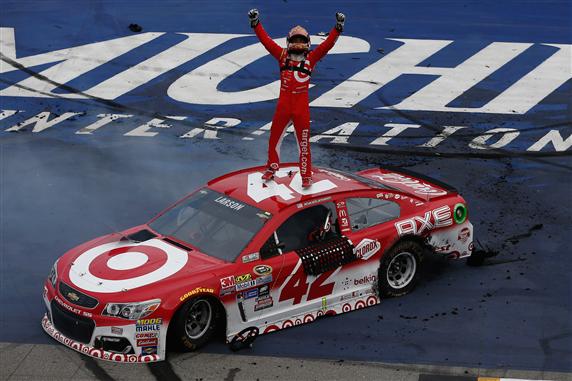 The Monster Energy NASCAR Cup Series travels to Brooklyn, Michigan this week for the FireKeepers Casino 400. The race can be seen Sunday at 3 p.m. ET on Fox Sports 1. Be sure to test your fantasy NASCAR skills in the Yahoo Fantasy Auto Racing game.

Michigan has been a lightning fast track ever since it was repaved in 2012. The Monster Energy NASCAR Cup Series used the new lower down-force package at the races at Michigan last year so the teams will have a good idea of what setup is needed in the cars this week.

There are many good choices in Group A this week but I am focusing on the drivers who have the momentum. Martin Truex Jr. has been the best driver in the group and that will not change Sunday. Kyle Busch and Kevin Harvick have been knocking on the door to Victory Lane so both drivers deserve consideration this week. Brad Keselowski has been a top-10 machine and he should add another one this week. Jimmie Johnson had some bad luck last week with his brakes but it is hard to imagine the No. 48 team will struggle two weeks in a row.

Truex Jr. has had the fastest car in nearly every race this season and that should not change Sunday. Truex has finished 10 of the 12 non-restrictor plate races in the top 10. He is very good on the 2-mile ovals as well. Truex qualified fourth; led 73 laps and finished fourth earlier this season at Auto Club Speedway. I expect similar results from the No. 78 car Sunday.

Keselowski is a Michigan native and it is no secret that winning his first race at his home track is at the top of his priority list. Keselowski always runs well at Michigan but he has not been able to get to Victory Lane. That could change Sunday. Keselowski has finished six consecutive races at the track in the top 10. Races at Michigan often come down to fuel strategy. Keselowski’s odds of winning will increase if the race comes down to which driver can save fuel the best.

Go big or go home! That is my strategy this week in Group B. Chase Elliott and Kyle Larson have been the two best drivers in the sport at the 2-mile ovals since the change to the new aero-dynamics package was made. You must have them on your team. I also plan to ride the hot hand with Ryan Blaney. Usually drivers run well after winning their first race. Jamie McMurray has scored the second most points in Group B in the last month. I will keep using him until he cools off.

Austin Dillon, Kurt Busch and Ryan Newman are the three drivers I would use (in that order) if you want to save allocations with the drivers I listed above. These three drivers seem to be running well right now.

Larson should be the favorite to win Sunday. Larson won his first career race at Michigan last year and he dominated the race at Auto Club Speedway earlier this season. Larson won the pole and led 110 laps on his way to Victory Lane. The best way to turn fast laps at Michigan is to run near the wall and no driver does it better than Larson. There are tracks where you want to save your allocations with Larson for. Michigan is one of them.

Elliott is still looking for his first win in the Monster Energy NASCAR Cup Series. He has competed in two races in at Michigan in the Cup Series. Elliott finished both races in second place. He also finished half of his starts in the Xfinity Series at Michigan in the runner up position. First time winners seem to be the theme this year. So far Ricky Stenhouse Jr., Austin Dillon and Ryan Blaney became first time winners. This week Chase Elliott will visit Victory Lane for the first time.

Blaney will have a lot of momentum after winning his first race last week at Pocono. The No. 21 Wood Brothers Ford has been fast all season. Blaney ran well at Michigan last year. He qualified seventh and finished fourth in the August race at the track. Blaney also finished in the top 10 earlier this year at Auto Club Speedway. Last week’s win was not a fluke. Blaney is an emerging star in NASCAR and his win last week will be his first of many more to come.

Most people do not realize that McMurray has scored the second-most points in Group B this season. I have been playing Fantasy NASCAR long enough to know that hot streaks like this do not last the entire season for drivers who have a history of being mid-tier drivers. I plan to keep using McMurray. I will be happy with the top-10 finishes I was able to get out of the No. 1 car even if I run out of allocations.

Michigan is the third-best track for McMurray. Last year he finished both races at the track in the top 10. The No. 1 car is a lot stronger than it was in 2016. McMurray also had success this year at Auto Club Speedway. He qualified eighth and finished sixth. I expect similar results from McMurray Sunday.

There are five drivers worth consideration in Group C this week. Erik Jones and Daniel Suarez are by far the best choices. Ty Dillon has been stacking up top-20 finishes. Michael McDowell has been one of the most improved drivers this season. Darrell “Bubba” Wallace Jr. is a risky choice but if you want to save allocations he is worth consideration (but I think McDowell will be just as good as Wallace so I am not worried about using him).

Jones is another Michigan native who would love to win at his home track. He has never competed in a Monster Energy NASCAR Cup Series race at Michigan but he finished fourth in his only Xfinity Series race at the track. Jones has the talent and car to finish in the top 10 Sunday. My plan is to use Jones for qualifying points and Ty Dillon for the race. I will not hesitate to use him if he qualifies in the top five and runs in the top five in final practice Saturday.

Dillon has something that Erik Jones and Daniel Suarez do not have this week… experience in the Monster Energy NASCAR Cup Series at Michigan. Dillon has competed in two races at Michigan. He finished 14th in his first race and 21st in his second. Dillon will have a better car and more experience with his team this week than what he did in his previous races at Michigan. I expect a top 15 finish from the No. 13 car Sunday.