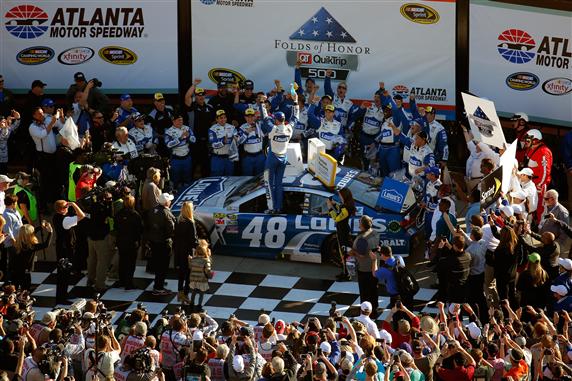 The Monster Energy NASCAR Cup Series travels to Hampton, Georgia this week for the Folds of Honor QuickTrip 500. The race can be seen Sunday at 2:30 p.m. ET on FOX Sport 1. Be sure to test your fantasy NASCAR skills in the Yahoo Fantasy Auto Racing game.

Now that the crash fest at Daytona is over fantasy teams can concentrate on some real racing. My picks took a beating last week, but I saw a lot worse in many of my leagues. Denny Hamlin limped to the checkered-flag, while David Ragan got into the wall early. Jamie McMurray tried his best to wreck the entire field and although he was close, he was unsuccessful. Austin Dillon remained my “Mr. Reliable” at the restrictor-plate tracks. Once again he was able to avoid the wrecks and bring the car home with a decent finish.

The race this week will be a lot different. Atlanta is an old worn-out track that loves to eat up tires. The team who manages their tires the best will win the race. The word of the day Sunday will be, “short pit.” Many of the teams will make stops early in the Stage to get tires and try to gain track position at the end of the Stage. New tires run about 3 seconds faster than worn out tires at this track.

Crew chiefs and pit crews will play a big role in the race this week. Drivers who are fast on the restart will also be important. Team Penske (Brad Keselowski and Joey Logano) have been the best at using strategy to their advantage. Unfortunately they have not had a lot of success at this track, so I would give the nod to Chad Knaus (Jimmie Johnson) as the best crew chief for this race. Joe Gibbs Racing had four of the top five pit crews in 2016 (according to OnPitRoad.com). These Toyotas should have the advantage Sunday. Kevin Harvick has been the best driver at the track the last two years. He has lead the most laps, but failed to win the races.

Group A has four drivers I would consider the favorites to win this week. Jimmie Johnson has dominated these races the last two seasons. Kyle Busch is the best driver on restarts and should be able to run up front. This is the best track for Dale Earnhardt Jr. He has finished the last two races in the top three. Matt Kenseth is Mr. Consistent. He has an average finishing position of 7.8 in his last 17 races at the track. Kevin Harvick gets around this track better that any other driver. How much will the switch to Ford slow him down this week?

Johnson is the obvious pick for Group A this week. He has won five races at Atlanta, including the last two. The No. 48 team ended the 2016 season with an average finishing position of 4.25 on the 1.5-mile tracks in the Chase. That includes wins at Charlotte and Homestead. Since this race should come down to strategy and the driver’s ability to maneuver a loose car around the track, I will put my money on Johnson and Chad Knaus to have another strong run Sunday.

This was the hardest pick for me this week. The choice was between Kyle Busch and Kevin Harvick. Busch should really run well Sunday because he has a smart crew chief (Adam Stevens), a fast pit crew and he should be able to make up a lot of ground on the restarts after each Stage. I went with Harvick though based on past performance at Atlanta and the fact that the Fords were so fast at Daytona.

Jimmie Johnson may have the trophies, but no driver has run as well as Harvick the last two seasons at Atlanta. He has led a series-high 247 laps, has a series-best driver ranking and he has started two of the last three races on the front row. What makes Harvick so good is that he is the only driver who can drive his car along the yellow line. He usually picks up a lot of spots that way and he is hard to pass once he makes it to the front. If Stewart-Haas Racing found a way to correct the No. 4 team’s pit crew speed, then Harvick should be in Victory Lane Sunday.

There are two really good picks in Group B and it is hard to imagine not using them in the race. Both Kurt Busch and Chase Elliott will have fast cars and they ran well in this race last year. They are the obvious choices.

There are five drivers that should compete for the last two spots in Group B. Kasey Kahne and Clint Bowyer race for powerhouse teams that have had a lot of success at Atlanta. Austin Dillon ran well on the 1.5-mile tracks last year, but I burned an allocation with him at Daytona. Kyle Larson had a lot of success in the new aero-package last year, but this one of his worst tracks. Ryan Newman is the best driver if you are going for qualifying points. He has started two of the last three races at Atlanta in the top four.

The last driver to win the first two races of the season was Matt Kenseth in 2009 (Daytona and California). Could Busch do the same this year? I think he can. Usually drivers carry the momentum over to the next race after they win the Daytona 500. Jimmie Johnson finished second at Phoenix after he was the Daytona 500 in 2013. Dale Earnhardt Jr. finished second at Phoenix after he won the Daytona 500 in 2014. So history is on the side of the No. 41 team having a good race this week.

Atlanta just happens to be the best track for Busch since he joined Stewart-Haas Racing. He started on the pole and finished fourth last season. I would expect a similar race from him this week.

During the offseason I predicted that Elliott would win his first race at his home track (Atlanta). Now it is time for the young driver to make me look good.

Elliott only has one Cup Series race at Atlanta on his resume, but it was a good one. He qualified 24th and raced his way through the field to an eighth-place finish. Elliott should be even better this week. This track has been dominated by Hendrick Motorsports the last two seasons. I expect Elliott to run up front now that he has more experience at the track.

Kahne was one of the best drivers on the 1.5-mile tracks at the end of the 2016 season. He finished third at Charlotte, 10th at Kansas and eighth at Texas. Since Hendrick Motorsports is so good at this track, I expect Kahne to run well Sunday. This is one of his best tracks. Kahne has three wins at Atlanta, including his last win the Cup Series in 2014. It has been 106 races since Kahne went to Victory Lane. Maybe this is the week it all comes together for him.

Bowyer ran well at Atlanta when he drove for Richard Childress Racing. His performances at the track began to decline when he moved to Michael Waltrip Racing and HScott Motorsports. This had more to do with his car than his talent. Bowyer will be in the best car of his career this week, so I expect another good run from the No. 14 team Sunday.

There are three good options in Group C this week. Erik Jones and Daniel Suarez will be the popular picks, but do not forget about a Ty Dillon. He has more experience at the track than the other rookies.

One of the best drivers at Atlanta was Carl Edwards. Did the team provide him a car that was that much better than the competition or was it Edward’s talents that got it up front? I think it had more to do with Edward’s than the car, so I will give Suarez the week off at a track where he had limited success at in the Xfinity Series.

Dillon is a rookie but he has more experience in the Cup Series at Atlanta than any other track. Dillon ran two of the last three races in the premier series at Atlanta and finished 25th in 2014 and 17th last season. Casey Mears was able to drive the No. 13 Germain Racing Chevy to a 14th place finish at Atlanta. I would expect similar results from Dillon this week.