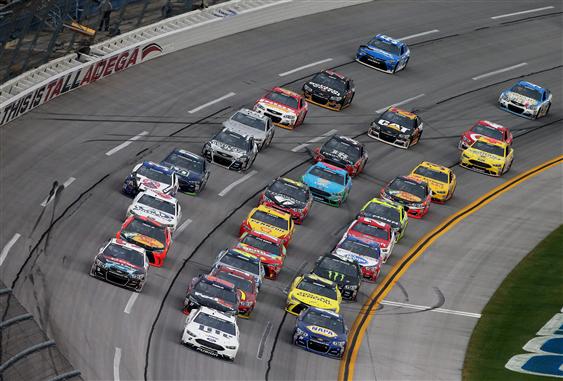 The Monster Energy NASCAR Cup Series travels to Talladega, Alabama this week for the GEICO 500. The race can be seen Sunday at 2 p.m. ET on Fox. Be sure to test your fantasy NASCAR skills in the Yahoo Fantasy Auto Racing game.

When will I be able to catch a break in the Yahoo Fantasy Auto Racing game? Whenever the television announcer says, “Before we go back to green, we have a few drivers who will start at the tail of the longest line for pit-road violations”… I know the next sentence will be a list of my Yahoo Fantasy Auto Racing team. It is starting to make me mad. STOP SPEEDING and STOP RUNNING OVER THE DAMN CONE!!!

Now that is out of the way we can start talking about the picks for the fastest, baddest, most dangerous track on the circuit… Talladega.

The strategy this week is to save allocations. Any driver who starts their engine Sunday has a good chance of finishing in the top 10. This track is too risky to use up your allocations with the top drivers. The only group where this philosophy does not apply is in Group A. There is enough talent in that group to get your team to Homestead while burning an allocation with one of the better drivers.

The two drivers in Group A I would not recommend this week are Martin Truex Jr. and Kevin Harvick. Both of these drivers are very good at the restrictor-plate tracks but their allocations are worth too much to be wasted in a race where they do not control their fate.

Truex has been the master at the 1.5-mile tracks, so you will definitely want to use him in the next two races at Kansas and Charlotte. Harvick is also very good on the 1.5-mile tracks and fantasy teams will want to save some allocations with the No. 4 car for Darlington and Phoenix.

A popular pick this week will be Dale Earnhardt Jr. He has 10 wins at the restrictor-plate tracks and no car has led more laps than the No. 88. I will be fading Earnhardt this week because he has not been able to find his “mojo” that he had earlier in his career. Earnhardt will probably win the race because I did not select him, but the risk is not worth the reward.

I will be using the two drivers from Team Penske this week. They have been the class of the field in Group A and their stats on the restrictor-plate tracks have been unmatched the last two seasons.

Jimmie Johnson won back-to-back races this season and now it is Logano’s turn to visit Victory Lane in consecutive weeks. I also think the trend will continue after Talladega with Martin Truex Jr. winning back-to-back races at Kansas and Charlotte. Two in a row could become the theme of the Monster Energy NASCAR Cup Series.

Logano is becoming one of the best restrictor-plate drivers in the sport. He has won two of the last three races at Talladega and Logano has the second-best average finishing position in the last eight races on the Superspeedways. The No. 22 car is my pick to go to Victory Lane Sunday.

Keselowski has been great at Talladega. He earned his first trip to Victory Lane in the Monster Energy NASCAR Cup Series in the 2009 race at Talladega. Keselowski has four wins at the track and has finished nine of his 16 starts in the top 10. Keselowski won this race last year and he should be considered one of the favorites to win Sunday.

In order to select my list of drivers for Group B I must first create the list of drivers I am not willing to waste an allocation with this week. Kyle Larson, Chase Elliott, Clint Bowyer, Jamie McMurray and Ryan Newman have been the most consistent drivers in the group. I do not recommend using any of these drivers Sunday because their allocations will be very important the rest of the season.

I am also taking Kurt Busch of the list. The No. 41 team cannot get through a race without some sort of mechanical failure. Last week it was the wiring for the fans in the car. I am worried about what the problem will be this week. I know he will be a popular pick since he won the Daytona 500, but let the other teams deal with the headaches of the No. 41 car this week.

The story that came out of the Richmond race is that the crew chief for the No. 3 car (Slugger Labbe) stayed in Charlotte to prepare the car for Talladega. We do not know if that is true or if Labbe was being punished for failing inspection five times in a row. What we do know is that Dillon is very good on the Superspeedways. His average finishing position in the last three races at Talladega is 8.6. It never hurts to have the No. 3 car in your lineup on the restrictor-plate tracks.

Blaney is not the first driver that comes to mind when people think about restrictor-plate racing. He has five career starts on his Talladega resume and he finished three of them in the top 10. Blaney usually follows his satellite teammates (Joey Logano and Brad Keselowski) around the track. This strategy usually puts him in a position to be up front at the end of the race. Blaney finished second in the Daytona 500 and I would not be surprised if he won his first race in the Monster Energy NASCAR Cup Series Sunday.

Stenhouse Jr. was close to making the “do not use list” because he has been running so well this season. I have all nine allocations left with the No. 17 car so I will not be afraid to use one this week. Stenhouse broke his streak of 16 consecutive races on restrictor-plate tracks where he finished on the lead lap at Daytona. The goal in fantasy NASCAR is to find drivers who do not wreck in these races. Stenhouse has only one wreck in his 16 starts.

Why not take the other Roush Fenway racing driver? Everyone knows Bayne won the Daytona 500 but they need to know he is good at Talladega too. Bayne has finished four of the last five races at the track on the lead lap. Last year Bayne finished 17th in the spring race and 10th in the fall. Roush Fenway Racing has faster cars this season so I look for Bayne to improve on those numbers.

I am sitting out the “big three” in Group C this week. Erik Jones, Daniel Suarez and Ty Dillon are too good at the other tracks and wasting an allocation at Talladega is not a wise move.

There are plenty of good choices in Group C this week. Michael McDowell, Landon Cassill and David Ragan have all had success at this track. Cole Whitt is probably the best play but I know I will not have the guts to use him in my starting lineup. Whitt has finished his last eight restrictor-plate races on the lead lap. If you have the guts to use him, he could pay off this week.

Elliott Sadler will be driving the No. 7 Tommy Baldwin Racing Chevy this week. He ran well at Daytona and should be considered this week.

McDowell is probably the driver I will use in the race Sunday. Each race he improves at the restrictor-plate tracks. Last year he finished 21st in the spring and 16th in the fall. McDowell ran well at Daytona and scored a top-15 finish. The No. 95 car is the safest pick in the group this week if you fade Erik Jones, Daniel Suarez and Ty Dillon.

My last choice for Group C came down to Elliott Sadler and Landon Cassill. My rule in Fantasy NASCAR is to never take a driver on a team that only competes in two-four races each season. I think Sadler will run well but I am not going against my rule. *Elliott needs to qualify on speed or he could go home since 42 cars are entered in the race Sunday.

I decided to go with Cassill. I had him last week at Richmond in the Fantasy Live game and he ran most of the race in the top 15. Front Row Motorsports is improving each week and they won a race at Talladega before (David Ragan in 2013). Cassill finished 16th in the Daytona 500 and I think he can finish in the top 20 Sunday.