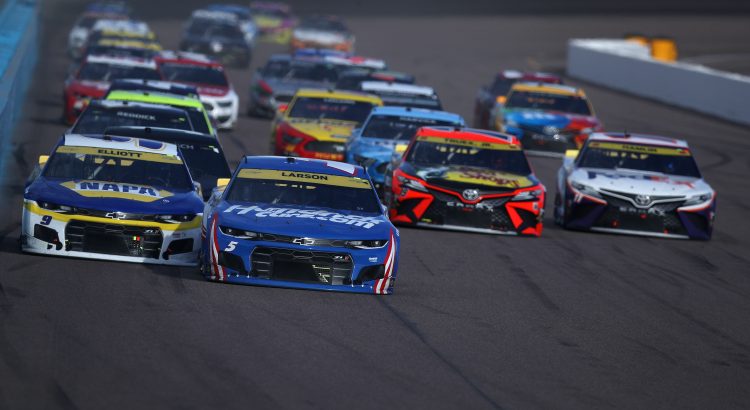 NASCAR’s plan when they introduced the Next Gen car was to “level the playing field.” Their goals have been achieved but it does not mean the top teams lost their advantage. We have seen a lot of drivers run up front who had no chance of leading laps in the old car. Eric Jones led 18 laps and finished third at Auto Club. Ross Chastain led 83 laps and finished third at Las Vegas. It was nice to see some knew drivers up front, but the top teams continue to win the races. Team Penske won the Daytona 500 and Hendrick Motorsports won the last two races. There is a lot of parity throughout the field, but the top teams keep cashing the winning tickets.

The long-shots continue to knock on Victory Lane’s door, so they continue to have value. I still think we will see one of the favorites crossing the finish-line first Sunday. My strategy this week will be to wager on three favorites, one driver with odds of 25-1 and throw a few bucks on an extreme long-shot to win the race.

Here are my best bets for the Ruoff Mortgage 500K… 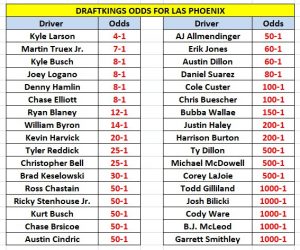 ** The first number is the amount of money based on the second number (the amount of the wager). So if you bet $1 on Kyle Larson, you will win $3.

KYLE Busch (8-1): There are a lot of reasons to like Busch this week. He is pissed off that Alex Bowman “backed into a win” at Las Vegas and took the trophy away from him. I expect Busch to be ready to make a statement Sunday and he should have the car that can to it. Busch had the best car on the short, flat track in the Los Angeles Coliseum. He led 35 laps and finished second. He also had one of the fastest cars at Auto Club until his team decided to cover the radiator with a protective mesh, causing the car to overheat. Last week Busch took a “parts car” and nearly drove it to Victory Lane. Sooner or later his luck is going to change. I will bet it happens this week.

Joey Logano (8-1): I’ve been betting on Logano in every race this year and so far he has not won me any money. Logano always wins a race early in the season, so his trip to Victory Lane is coming. He won the race at the short, flat track at the Los Angeles Coliseum, he had the second-fastest car in the Gen-7 test session at Phoenix in January and he has had speed in all of the races this year. Logano won at Phoenix in 2020 and he finished second last year. I will bet that he can win Sunday.

CHASE ELLIOTT (8-1): Can the trend of Hendrick Motorsports cars finding their way to Victory Lane continue this week? I think it can. Kyle Larson won two weeks ago at Auto Club and Alex Bowman won last week at Las Vegas. Now it is Elliott’s’ turn to win. Elliott has led at least 90 laps in three of the last four races at Phoenix Raceway, so he is no stranger to running up front at this track. Elliott won at Phoenix in 2020. I will bet he will win again Sunday.

TYLER REDDICK (25-1): Don’t look at the stats for Reddick at Phoenix Raceway. They suck. This pick is more about, “what have you done for me lately.” Reddick dominated the short, flat track race at the Los Angeles Coliseum (Reddick led 51 laps). He was also second-fastest in the Gen-7 test at Phoenix in January. The No. 8 car has had top-10 speed in every race this year, so there is no reason to believe Reddick will not have speed this week. I will take a chance with Reddick at 25-1 odds.

Long Shot Special: ERIK JONES (60-1): Every year a driver has a breakout season that most people did not see coming. So far that driver is Jones. He had a blazing fast car at the Los Angeles Coliseum when he finished fourth. Jones was also fast at Auto Club (Jones finished third) and he was running in the top-10 last week when he crashed. Jones has too much speed to be 60-1 odds. I will bet a few bucks on Jones and see if he can get the No. 43 car back to Victory Lane.