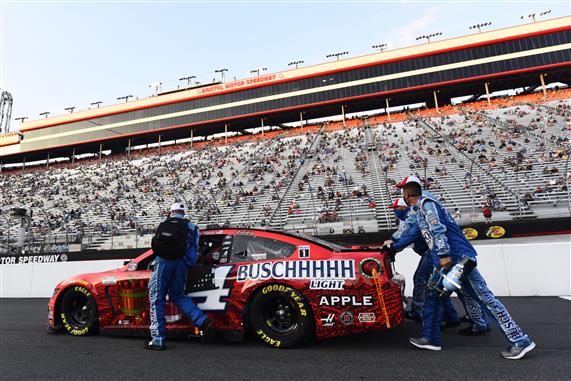 NASCAR sure picked a good track to be the deciding race in the first round of the playoffs. Racing at Bristol Motor Speedway is always exciting. I expect a long of beating and banging as drivers fight for a spot in the final 12. The best way to pick our drivers for the race in Thunder Valley this week is to look at what happened at Bristol in June. Here are my race notes from the last race at Bristol…

Bristol: Food City 500 (2020): The Cup Series competed at Bristol in late May and then they came back for the All-Star Race in July. That is 640 laps of racing on this high-banked, short track to help us prepare for Saturday nights race.

The All-Star race was the Ryan Blaney and Chase Elliott show. Blaney started up front and led 72 of the 140 laps. Elliott started in the middle of the field and it took the No. 9 car a while to make it to the front. Once Elliott got the lead, the race was over. He led 60 laps and took home the $1M prize. Kyle Busch did his best to run down Elliott, but the No. 18 car did not have the speed to keep up. Elliott had the best car in both races at Bristol this season.

* There were 17 cautions in the race and 12 cars crashed out of the race. I expect at least 17 cautions Saturday and probably more cars in the Garage before the checkered flag is waived.

– Denny Hamlin won this race last year and he showed up at Bristol with a fast car in May. Hamlin started 10th and quickly went to the front. Hamlin led a race-high 131 laps, finished 8th in Stage 1, 2nd in Stage but he got loose while leading the race with 10 laps to go. He spun out and finished 17th.

– Kyle Busch has always been one of the best drivers at Bristol and it was no different in May. Busch started 7th and he fought a tight racecar at the beginning of the race. Busch led 100 laps and score 6 Stage points. He finished 4th in the race. Busch has a 5th-place average finishing position in his last six races at Bristol. He is one of the safest picks in the field Saturday night.

– Martin Truex Jr. has never won at Bristol. This high-banked, short track ranks as his worst track. Turex has a 21.8 average finishing position in his last six races at Bristol. He started 5th, did not score any Stage points and was involved in an accident on lap 466 . There are safer picks for your fantasy team than Truex at Bristol.

– Erik Jones has been either really good or really bad at Bristol in his career. He finished 2nd in Thunder Valley in his rookie year. He was also good in May. Jones started 15th and it took him until the second Stage to break into the top 10. Jones finished 8th in Stage 2 and 5th in the race. He was running 7th with four laps to go but moved into the top five when Chase Elliott and Joey Logano wrecked each other.

– Christopher Bell had one of his best races of the season at Bristol in May. Bell started 35th and slowly made his way to the top 10. Bell did not score any Stage points, mostly because he started so deep in the field and had to fight from going a lap down in Stage 1. Bell finished the race in the 9th position. He won at Bristol in the Xfinity Series last year so it should not have been a surprise to see Bell run well at one of his best tracks.

– Kevin Harvick had a quiet race at Bristol. That is pretty much what he has been doing at this track over the last four seasons. Harvick runs in the top 10, does not lead any laps, but he does score Stage points. When the checkered flag is waived, Harvick is somewhere between 5th and 10th. Harvcik started 8th, scored 13 Stage points and finished 11th.

– Clint Bowyer has been one of the best drivers at Bristol over the last three seasons. His 7.29 average finishing position is a series best. He was good in the last race too. Bowyer started 23rd and quickly went to the front. Bowyer scored 5 Stage points and finished 2nd. It was his 5th consecutive top-10 finish at the track.

– Aric Almirola has a history of bringing fast cars to the track at Bristol but usually they are wrecked when they leave the track. Almirola started on the front row in the last race at Bristol. He ran the first Stage in the top 5 and scored 7 Stage points. He was in the wrong place at the wrong time on lap 466. Almrila crashed and finished 29th. He has crashed out of 2 of the last 3 races at Bristol.

– Cole Custer had some success at Bristol in the Xfinity Series but it is a lot different competing at this track in the Cup Series. Custer started 22nd in the last race at Bristol. He had a hard time moving up through the field. Custer crashed on lap 231 and it ended his day. Custer finished 35th. He came back to Bristol and finished 16th out of 20 cars in the All-Star Race.

– Chase Elliott should have won the first race at Bristol and the All-Star race. He won both Stages in the race, led 88 laps and he was leading the race with 4 laps to go. He ran Joey Logano up the wall and both drivers wrecked and handed the victory to Brad Keselowski. Logano was pissed at Elliott after the race.

– Jimmie Johnson has been one of the more underrated drivers at Bristol because he has not been to Victory Lane in Thunder Valley since 2017. Johnson has finished seven of his last eight races at this track in the top 11. He was good in May. Johnson started 24th and made it into the top 10 before the end of Stage 1. Johnson finished 3rd in the race. It was one of his best races of the season.

– Alex Bowman really did not get to show what he had in the last race at Bristol. Bowman started 11th and he was running right outside the top 10 when he was spun out by Ricky Stenhouse. Bowman hit the wall and finished 37th. He has been hit or miss at Bristol so the No. 88 car is a risky pick for your fantasy teams this week.

– William Byron has not been very good at Bristol in his career but maybe he figured something out this year. Byron entered the race with a 19.5 average finishing position at the track. He was able to avoid the wrecks in the May race in Thunder Valley. Byron finished 8th in the race. It was by far his best ever finish.

– Kurt Busch ranks right at the top of the list of drivers at Bristol. He has six trips to Victory Lane at Bristol. He won the race in 2018 and finished 2nd last year. He was good again in May. Busch started 12th, ran the entire race in the top 10 and finished 7th. Busch is one of the safest picks for your fantasy team Saturday night.

– Matt Kenseth filled in for Kyle Larson at Bristol in May. Larson has dominated most of his races at this track in the No. 42 car so it was interesting to see what Kenseth could do. He never got a chance to show his skills. He was running in the 10th spot when he was spun out during the Ricky Stenhouse Jr. wreck. The team fixed the car and Kenseth finished 16th. He finished 4th in his prior two races at the track in 2017.

– Joey Logano started 3rd and looked fast at the beginning of the race. He finished 5th in Stage 1 and was battling Chase Elliott for the lead but he got loose, slammed into Elliott’s door and smashed his fender in. Logano ended up finishing 21st. After the race Logano said, “I was more pissed that he (Chase Elliott) did not even have the balls to come up to me after the race and apologize. I mean, come on man… You wreck someone and just walk away? I went up to him and asked him what happened and he said..Well, you have done it too…. Really? Well, If that is how he wants to race, that is how I will race the No. 9 car.”

– Brad Keselowski did not have the fastest car at Bristol but he did have the winning car. That happens a lot to the No. 2 team. Keselowski started on the pole. He led 115 laps and scored 10 Stage points. He was running third with four laps to go. Chase Elliott and Joey Logano were running No. 1 and No. 2. They decided to wreck eachother and Keselowski stepped up to capitalize on their mistake. He has finished 1st and 3rd in his last two races at Bristol.

– Ryan Blaney had the most dominant cr at the beginning of the race. He started fourth and immediately went to the front. Blaney led 60 laps but was passed by Chase Elliott at the end of Stage 1. Blaney finish 2nd in the first Stage and continued to run up front until he got loose and Ty Dillon knocked the front end off of his car. Blaney finished last but had a fast car.

– Matt DiBenedetto entered the race with a lot of high expectations. He finished 2nd in this race last year while driving for Leavine Family Racing. Most people thought he would have a chance to win in his Wood Brothers Ford. DiBenedetto started 9th and was running 8th when he was wrecked on laps 231. DiBenedetto finished 31st so we never got to see how good he could have been.

– Austin Dillon entered the race at Bristol with a 18.3 average finishing position at the track. He had one of his best races of his career at the track in May. Dillon started 20th and used pit strategy to gain some track position at the end of the race. Dillon finished 6th in the race. He may have a hard time duplicating his 6th-place finish this week.

– Tyler Reddick won the September night race at Bristol in the Xfinity Series last year. He also finished 2nd in the spring Xfinity Series race. Reddick started 21st and he was running 12th when he was involved in a wreck on lap 231 (The Ricky Stenhouse Jr. wreck). He looked good until the wreck. I would not worry about his 36th place finish in the May at Bristol. He should be much better Saturday night.

– Ricky Stenhouse Jr. had a fast car but nothing to show for it. That has been a theme with the No. 47 car at Bristol. Stenhouse started 16th and finished 9th in Stage 1. He was running up front when spun out by Jimmie Johnson. Stenhouse took out five other cars and finished 34th. He has finished 34th, 33rd, 33rd and 24th in his last four races at Bristol

– Chris Buescher has competed in 10 races at Bristol. He has only finished in the top 10 once. It happened in 2016. Buescher was not very good in the May race at Bristol. He started 19th and run most of the race around the 20th position. Buescher finished 23rd in the race. He also finished 17th and 22nd in the two races at Bristol last year. You can almost pencil Buescher in for a 20th place finish Saturday night.

– Ryan Newman has been a “middle of the pack” driver at Bristol in his career and that is what he was in May. Newman started 17th, had a 18.3 average running position, did not score any Stage points and finished 15th in the race. He should finish somewhere near the 15th position again this week.