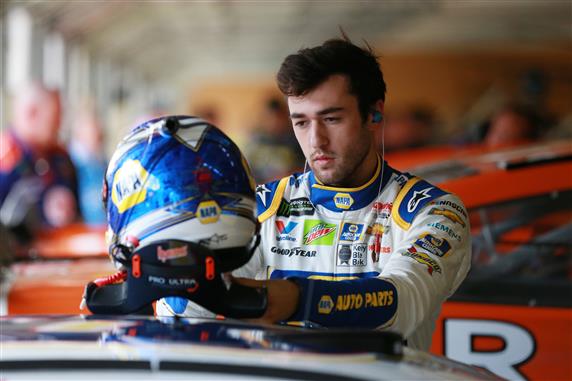 The NASCAR Cup Series will complete the Round of 12 at the Charlotte Roval this week. This is a unique track and some drivers have performed well, while others have really struggled to figure out the correct braking zones. The best way to determine which drivers would be best for our Fantasy NASCAR teams this week is to look at what happened in the last race at the Charlotte Roval.

– The Track: Tensions were high and the racing was rough at the Bank of America Roval 400 last year, but when the checker-flag was waived it was the same two drivers who dominated the previous road course races battling for a spot in Victory Lane. Chase Elliott and Martin Truex Jr. have been the two best road course drivers and that did not change at the Roval in 2019. Elliott won his 2nd consecutive Road Course race and Truex ran up front all day.

Alex Bowman also had a good race and a big middle finger. He flipped Bubba Wallace the bird and after the race Wallace poured water on a dehydrated Bowman who was seeking medical attention.

– Martin Truex Jr. had to start in the back since he missed a shift in practice and Cole Pearn decided to play it safe and change the engine before the race. Truex was credited with an 8th place qualifying position but he started 37th. Truex quickly made his way to the front. The No. 19 car finished 7th in Stage 2, led 1 lap and had a 9.31 average running position (6th best). It was a good race for Truex.

– Kyle Busch has won on every track except the Charlotte Roval. He desperately wants to scratch this track off his list. Busch qualified 17th and he was moving to the front early in the race. The No. 18 car could not take the stress of the twisting and turning track. The suspension broke on the car on lap 99 and caused Busch to finish 37th.

– Denny Hamlin had to start in the back since he crashed his primary car in practice. Hamlin was credited with a 28th-place starting position but actually started 36th. Hamlin made his was inside the top 25 but he was caught up in an accident on lap 24. The team spent the rest of the race trying to fix the damage. It was a poor performance for Hamlin with his 19th place finish.

– Erik Jones entered the Bank of America Roval 400 with an 8th place finish at Sonoma and a 4th place finish at Watkins Glen. The team was confident that they could finish in the top 10 again but that was not the case. Jones crashed on lap 24 and his race was ended. He finished 40th and 30th in his 2 races at the Charlotte Roval.

– Brad Keselowski had one of the fastest cars in the inaugural Roval Race in 2018 but he led the field into the wall on a late-race restart. He came back last year and had another fast car. Keselowski qualified 11th and had an 8.33 average running position (5th best). Keselowski finished 6th in Stage 1, 2nd in Stage 2 and 5th in the race. The No. 2 car used good pit strategy and a fast car to finish up front.

– Joey Logano entered the Bank of America 400 after finishing 23rd at Sonoma and 19th at Watkins Glen. He was trying to win the regular season title from Kyle Busch so the No. 22 team needed a good race. Logano qualified 3rd and ran up front in the first Stage. His car got tight and lost positions on the restarts. Logano finished the race in the 10th position.

– Ryan Blaney entered the race as the defending champion. He also finished 3rd at Sonoma and 5th at Watkins Glen earlier in the season. Blaney is quickly becoming one of the best road course drivers in the Cup Series. Blaney qualified 9th and had a 13.28 average running position (11th best). The No. 12 car came home in the 8th position.

– Kevin Harvick entered the Roval race last year with 5 consecutive top-10 finishes on the road course tracks. He easily extended his streak to 6 races with his 3rd place finish in the Bank of America Roval 400. Harvick qualified 6th, had a 3.31 average running position (best in the series), finished 8th in Stage 1, 5th in Stage 2 and led 34 laps in the race (2nd most). Harvick had the best car in the field at Charlotte last year.

– Aric Almirola entered the race on the playoff bubble. The strategy for the No. 10 was to log laps and score as many points as possible. Almirola qualified 16th and he tried to use pit strategy to score Stage points but the cautions did not go his way. Almirola finished 7th in Stage 1 and 14th in the race. It was enough points for Almirola to finish 13th in the Playoff Standings.

– Chase Elliott has quickly become the best road course driver in the Cup Series. He has won 4 of the last 6 road course races. Last year Elliott qualified 19th and quickly made his way through the field. Elliott finished 9th in Stage 1 before taking over the race in Stage 2. The No. 9 car won the 2nd Stage, led a race-high 35 laps and went to Victory Lane in the Bank of America Roval 400.

– William Byron led 21 laps in the inaugural race at the Charlotte Roval in 2018 and he had another good race last year. Byron won the pole and took the early lead. He was able to lead 23 laps in the first Stage. Byron needed as many points as possible to secure his playoff spot so Chad Knaus called a conservative race. It worked. Byron finished 6th in the race and 11th in the Playoff Standings.

– Alex Bowman crashed his primary car in practice so the No. 88 team went to a backup car and had to start the race from the rear of the field. Bowman was also sick with the flue. After missing the chicane and having to serve a pass-through penalty, Bowman really took off. He slowly made his way to the front and finished 2nd in the race. He also finished 4th in the first Charlotte Roval race so his stats at this track are as good as any driver in the field.

– Jimmie Johnson had a good chance to win the inaugural Charlotte Roval race but spun out Martin Truex Jr. on the final turn. He needed points to advance into the playoffs so Johnson tried to gamble last year. The No. 48 car qualified 4th but gave up Stage points in the first Stage in order to start up front in the 2nd Stage. Johnson finished 4th in Stage 2 and 9th in the race. He probably should have tried to get those Stage points in the first Stage because he missed the playoffs by 6 points.

– Kyle Larson is always good at qualifying and good at the beginning of the race because his car is usually good on the short runs and poor on the long runs. That was the case again at the Bank of America Roval 400. Larson qualified 7th and won the first Stage. His car lost speed in traffic. The No. 42 car led 5 laps and finished the race in the 13th position. Matt Kenseth will drive the No. 42 car Sunday.

– Kurt Busch is always good on the road courses. He entered the race at the Charlotte Roval last year with a 7.72 average finishing position in his last 12 road course races (that is outstanding). Busch did not have good luck at the Roval last year though. The No. 1 car qualified 23rd and spent most of the race running just inside the top 15. Busch was caught up in a wreck on lap 100 and it caused him to finish 20th.

– Ryan Newman has not been a very good road course driver in his career. His average finishing position in the last 10 road course races is 19.3 with only one top-10 finish. Newman had another bad day last year at the Charlotte Roval. Newman qualified 24th, had a 18.54 average running position (19th best) and finished 32nd after being caught up in a lap 100 wreck with Kurt Busch.

– Ricky Stenhouse Jr. has never finished inside the top 15 on a road course track. He almost did it last year at the Charlotte Roval but it was just an “OK” race for Stenhouse. The No. 17 car qualified 21st, had a 16.65 average running position (17th best) and finished 17th. There are better tracks to use Stenhouse at.

– Chris Buescher learned a lot about road course racing when he was teammates with A.J. Allemendinger. He entered the race after finishing 13th at Watkins Glen and 16th at Sonoma. Buescher is usually a good pick for Fantasy NASCAR teams because he usually qualifies poorly and finishes inside the top 15. Buescher qualified 12th at the Charlotte Roval last year and that hurt his value. Buescher finished 18th and lost 6 place differential points.

– Austin Dillon is simply not a good driver on the road courses. He has never finished inside the top 15 on a road course and his last 5 races look like this: 23rd, 31st, 24th, 39th and 27th. Not good. Dillon qualified 30th last year at the Charlotte Roval, had a 21.21 average running position (22nd best) and finished 23rd. There are better options for your Fantasy NASCAR team.

– Michael McDowell must be considered for your Fantasy NASCAR team when the Cup Series competes at the road courses. He spent the night in the hospital over the weekend because of kidney stones. He hopped in the car without any practice and finished 12th. McDowell also scored 10 place differential points. Not bad for a cheap driver in DFS contests.