The PGA Tour heads to the Quad Cities right outside of Davenport, Iowa this week for the John Deere Classic. This tournament is always one of the worst on the schedule. It is not because TPC Deere Run is a bad course; but because of the placement of the tournament on the PGA Schedule. The John Deere Classic is usually played right before the Open Championship in the United Kingdome. Most of the golfers want to head overseas to get adjusted to the time change and get some practice on the links course so they skip the John Deere Classic to get ready for the Scottish Open next week and the Open Championship in two weeks. That is the case once again this year.

TPC Deere Run will be the host course this week. It plays 7,268 yards in length and is a par 71. The course is pretty easy. The par 4’s are pretty short and the fairways are wide. There is no water to be concerned with but there are a lot of bunkers to make it somewhat challenging. This is definitely a week when the short hitters can score well as long as their wedge game is in form. I expect some low scores from the golfers and some high scores in DFS.

– Stroke Gained Off the Tee 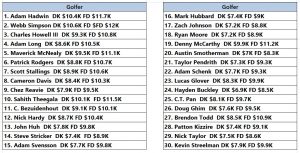 Strategy for lineup construction will be tricky this week. I read on the DK Nation website that the winning lineup for the John Deere Classic last year and in 2019 spent all $50K of the salary cap and had all six golfers with double-digit ownership. In 2018 the winning lineup had six golfers priced between $7.6K and $8K and most of the golfers had single-digit ownership. So this tells us that “stars and scrubs” and a “balanced lineup” should work this week. I plan to build more “stars and scrubs” lineups because I trust the higher priced golfers more this week and there is not much difference between the golfers priced in the Mid-$7K range and the golfers in the high-$6K range. 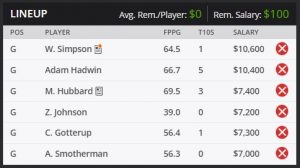 WEBB SIMPSON ($10,600): There is a lot of trash to dig through to find good golfers for your lineups this week. Why not just stack the top-two golfers in the field and hope they dominate the top of the leaderboard? That will be my strategy in Cash Contests. Simpson and Hadwin could win a Cash Contest by themselves if they just play as well as they should. Simpson ranks third in the key stats and this course fits his game perfectly.

MARK HUBBARB ($7,400): Hubbarb is not the greatest golfer in the world but he should make the cut and score well this week. Hubbarb has made his last five cuts and six of his last seven cuts. He ranks No. 3 in the field in Shots Gained Approach. That should set him up for a lot of short birdie putts.

STEVE STRICKER ($7,400): Does course history mean anything this week? I think it does and the only golfer that knows this course better than Stricker is Zach Johnson. Stricker has played the John Deere Classic 18 times, won the tournament twice and he has made 15 cuts in a row at the John Deere Classic. Striker has been playing pretty well on the Champions Tour. He should make the cut and score well this week.

*Steve Stricker withdrew so I replaced him with Chris Gotterup ($7,300). He is one of the best college golfers over the past few years and he made the cut in the Travelers Championship last week and he finished 43rd at the U.S. Open. Gotterup also ranked 28th in the key stats so I will take a chance with the young golfer.

ZACH JOHNSON ($7,200): You cannot fade Zach Johnson in the “Zach Johnson Invitational.” This is his home course, the fan love him and he always plays well here. This is The Masters for Johnson. He goes on autopilot at TPC Deere Run. He holds the record for most birdies ever made here and he has won more money in this tournament than anyone. $7,200 is too cheap for a golfer who has made 17 cuts in a row in the John Deere Classic.

AUSTIN SMOTHERMAN ($7,000): I need a cheap golfer for my Cash Contest lineup so I will take a chance with Smotherman. He has never played in the tournament but he has not played in most of the tournament this year. Smotherman missed the cut last week but he made the cut in his previous five tournaments. This tournament is going to be a scoring fest and Smotherman ranks No. 1 in the field in birdies made over his last 16 rounds. 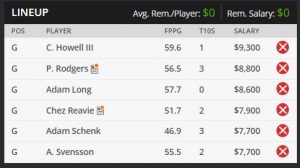 CHARLES HOWELL III ($9,300): I will play a more balanced lineup for this Tournament Contest team. CH3 enters this tournament in decent form after making his last two cuts. He has also had a lot of success at the John Deere Classic. CH3 has made 9 of his last 10 cuts here and has not missed a cut since 2012. He finished sixth here in 2019. CH3 should have a good chance to finish in the top-five Sunday.

PATRICK RODGERS ($8,800): The numbers suggest Rodgers should be a top-10 play this week. He ranks 7th in the key stats, mostly because of his red hot putter. Rodgers has also enters in good form since he has made six of his last seven cuts. He has also made every cut in the John Deere Classic since 2015. That includes a second-place finish in 2017. Rodgers withdrew last week so keep an eye on his status this week. If he plays, I am playing him. He he WD’s I will pivot to Nick Hardy.

ADAM LONG ($8,600): Long seems to have his game figured out. He has not finished back-to-back tournaments in the top-25. He also finished 23rd at the John Deere Classic. Long has never missed at cut at TPC Deere Run so he should be a safe play with a lot of upside this week.

CHEZ REAVIE ($7,900): Reavie is one of the best value picks in the field this week. He ranks 3rd in Shots Gained Tee-to-Green, 18th in Shots Gained Approach, 12th in Scrambling and 5th overall in the key stats. Reavie finished 8th last week and he finished 18th in the John Deere Classic last year. He should score well in this tournament.

ADAM SCHENK ($7,700): How about getting the golfer who finished 4th and 6th in his last two trips to TPC Deere Run for $7,700? I will take it. Shenk has also made five of his last six cuts on tour. He ranks 9th in the key stats this week. I will take a chance with Schenk this week.

ADAM SVENSSON ($7,700): Svensson is another golfer who popped in my research for this tournament. Svensson ranks 8th in the key stats and he finished 18th in his only trip to TPC Deere Run in 2019. His for is better this year than it was in 2019. Svensson has made five cuts in a row on tour. He should extend that streak this year and have a good chance to finish in the top-20. 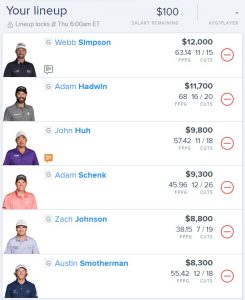 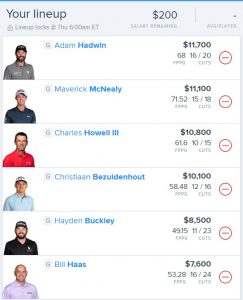 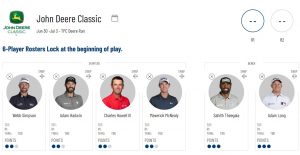 * This is the fourth tournament of segment four. This is also the toughest segment to navigate. We have the U.S. Open; Open Championship and the four playoff tournaments in this segment. It is going to be tough getting to the end with the top golfers. The top golfers are not entered in the field this week so there is no need to worry about saving allocations. Simply use the best lineup you can.

* I know I picked Adam Hadwin to win, but I do not want to put all of my eggs in the Adam Hadwin basket, so I will play Webb Simpson as my One & Done pick.